Christmas 2017 was "better than ever for the family of Echo products," said Amazon on the day after Christmas. But among all the full-size Echos and Echo Dots, all the Echo Spots and Echo Shows that Amazon sold last year, the single best selling product in Amazon's Echo inventory was the tiny Echo Dot.

Retailing for just $29.99 for much of the holiday season, you might not think Echo Dot would even scratch the surface of Amazon.com's $95 billion in North American e-commerce sales. But there's one place in particular where Echo Dot's sales success will make itself felt: The bottom line.

This quarter, Echo Dot is going to dent it. 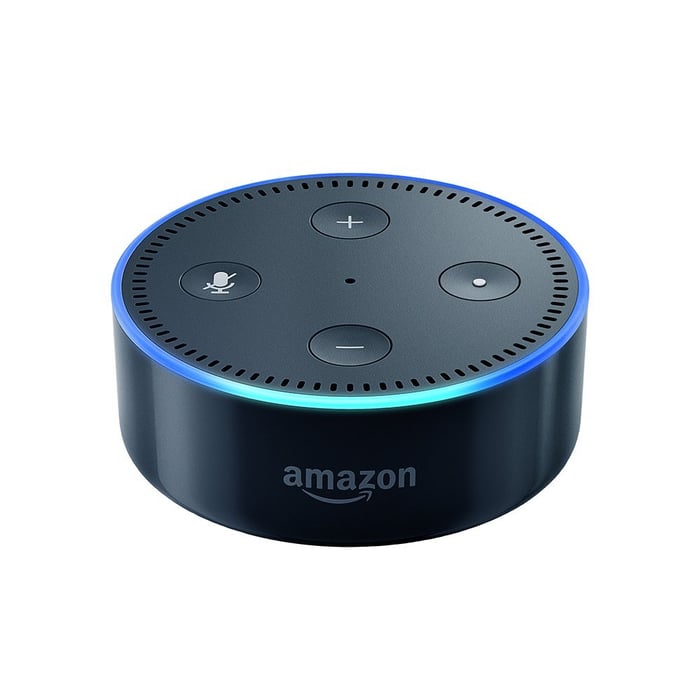 In its just-after-Christmas press release, Amazon confirmed that it sold "millions" of Echo Dots over the holidays. Equity analyst Nomura -- one of the very best analysts we track here at Motley Fool CAPS by the way -- tried to firm that number up for us, estimating that "Amazon sold 20 million" Echo Dots. Multiplied by a retail price of $29.99 per unit, that works out to nearly $600 million in revenue for Amazon -- about 0.6% of all the revenue that Amazon brings in over the course of an entire year, and all from just one product. What's more, Nomura calls its "20 million" estimate "conservative," so the sales number could turn out to be higher.

But how profitable were these sales for Amazon?

Last year, ABI Research estimated that the components alone needed to build Amazon's second generation Echo Dot cost $34.87. That's not including labor, shipping costs, power consumption, and so on. So if Amazon was selling its Dots for $29.99, that seems to imply that it was selling the devices at a loss.

In fact, 20 million Echo Dots sold at $4.88 below their component costs appears to suggest a loss of $97.6 million for Amazon. If correct, this would be enough to subtract 5% from Amazon's annual profits of $1.9 billion (earned over the past 12 months). It might even be a big enough loss to give Amazon an "earnings miss" in Q4.

According to data gathered by S&P Global Market Intelligence, Wall Street analysts expect Amazon to book $59.8 billion in sales and $920 million in profits when it reports Q4 earnings (due out either very late this month or very early in February). Hopefully they've been reading the same headlines we have, and have already factored the losses from Echo Dot sales into their estimates so as not to be surprised. But there's always the potential that they haven't, and that sets up the potential for Amazon's wild success in selling Echo Dots to be eclipsed by its short-term failure to profit from those sales.

It's also worth pointing out that recent media reports suggest Echo Dot component costs may have declined over the past year, such that the company spent no more than about $31 per unit to build all the Dots it sold over Christmas. That would imply a smaller loss on the Dot sales -- but still a loss, and still the potential for a profits miss.

What smart investors should know about smart speakers

All that being said, long-term investors should keep in mind that there exist two very good reasons for Amazon to sell its Echo Dots at fire-sale prices this past Christmas. Given the option of paying upwards of $100 for a full-size Google Home smart speaker or more than $300 for an Apple HomePod (which in fact wasn't even available for sale) versus less than $30 for an Echo Dot, it's likely that Christmas shoppers viewed that choice as something of a no-brainer. (Alphabet (NASDAQ:GOOG) (NASDAQ:GOOGL) itself figured this out quickly, dropping the price on its Google Home Mini speaker to match Amazon's Dot price.)

This helps to explain the wildfire success of Echo Dot sales. It also may have crowded out Google and Apple's alternative smart speakers, and strengthened Amazon's commanding lead in this space.

Down the road, Amazon can be expected to parlay that lead into more sales of other Alexa-enabled devices, including upgrades from Dot to full-size Echos, Echo Shows, and Echo Spots. And, of course, Amazon may well benefit from simply selling more "stuff" period, given that Echo owners have been shown to spend more money at Amazon.com than non-Echo owners do.

Long story short, in the short term, yes, Amazon probably lost a lot of money on its Echo Dot sales. But it's the long story that counts.