Shopify hasn't posted a full-year profit yet, but its price-to-sales ratio of 19 is much higher than the industry average of 6 for application software makers. Analysts expect it to squeeze out a slim non-GAAP profit for fiscal 2017 and 2018, but the stock still trades at a whopping 423 times next year's estimates.

Those lofty valuations made Shopify a target for short sellers like Citron Research, which accused the company of overselling its ability to generate revenues for small business owners.

Yet Shopify weathered that storm and retained most of its gains. Let's see why some investors are paying a premium for Shopify, and whether or not you should join them.

Shopify's revenues rose 95% in 2015 and 90% in 2016, and Wall Street anticipates another 70% growth this year. That growth indicates that demand for Shopify's services is rising as smaller businesses rush to establish an online presence.

Shopify helps these businesses design, set up, and run online stores. It also helps them process orders, payments, and shipments; launch marketing campaigns, and build customer relationships -- all while gauging their performance with analytics.

CEO Tobi Lütke claims that Shopify is built to become a "100 year" business, since companies will constantly need to bring their businesses online. Forrester Research estimates that online sales will account for 17% of all US retail sales by 2022, up from 12.7% in 2017.

This means that the market is growing at a healthy clip, and there is plenty of room for Shopify to grow before its market gets saturated.

That rising demand was seen during last year's extended Black Friday and Cyber Monday shopping weekend, when Shopify processed over $1 billion in gross merchandise volume (GMV) from more than 500,000 merchants in 175 countries. At its peak, those merchants processed over $1 million in transactions per minute -- nearly double the peak transactions of $555,716 per minute it reported a year earlier.

Not much meaningful competition

Shopify has a first mover's advantage in its market, and it doesn't face much competition. Its only notable rivals are Bigcommerce and Magento, but those smaller platforms lack Shopify's brand recognition and scale.

The only real threat to Shopify was Amazon (NASDAQ:AMZN), which launched a Shopify-like platform called Webstore in 2010. But Amazon shuttered the platform in 2015 and eventually integrated Shopify into its own marketplace.

Amazon isn't the only company which recognizes Shopify's staying power. Last September, HubSpot (NYSE:HUBS) integrated Shopify's platform and data into its own sales and marketing platform.

The two platforms directly complement each other, since HubSpot helps businesses increase their online visibility, generate new leads through marketing channels, and convert those leads into paying customers.

In November, Shopify partnered with UPS (NYSE:UPS) to integrate its premium services and tracking options into Shopify's platform. Through that deal, Shopify merchants can cut shipping costs with "exclusive" UPS domestic and international rates. 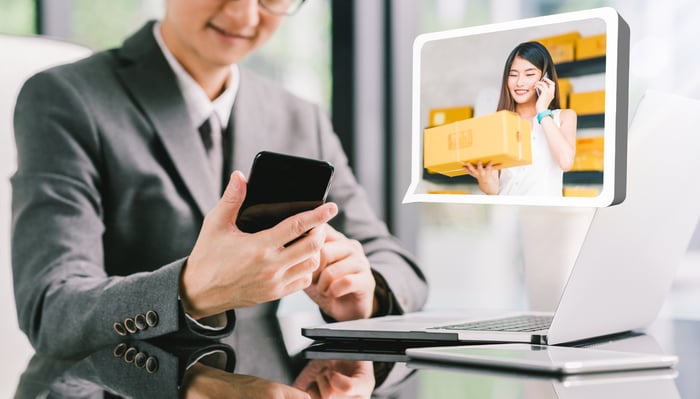 Shopify locks in its merchants with an expanding portfolio of services, which boosts its monthly recurring revenues (MRR) per merchant. Its pricing tiers range between $9 for Shopify Lite, which lets merchants sell products on Facebook and access basic features, to $40,000 for the full-featured Shopify Plus for higher volume merchants.

The expansion of this ecosystem bolsters Shopify's top line growth, but also weighs down its earnings. That's why the company wasn't consistently profitable in the past, and plans to emphasize growth over profits for the foreseeable future.

Should you pay that premium, too?

Shopify's valuations indicate that much of its potential growth is already baked into its price. Therefore, I'm willing to nibble on the stock at these levels, but I'm not bold enough to start a full position just yet.