Few stocks have offered investors the type of long-term rewards to match Tesla (NASDAQ:TSLA). Since going public in 2010, shares have returned over 1,500%. But how risky is the company's stock moving forward?

There's the potential for cascading effects that could leave investors licking their wounds for some time to come. 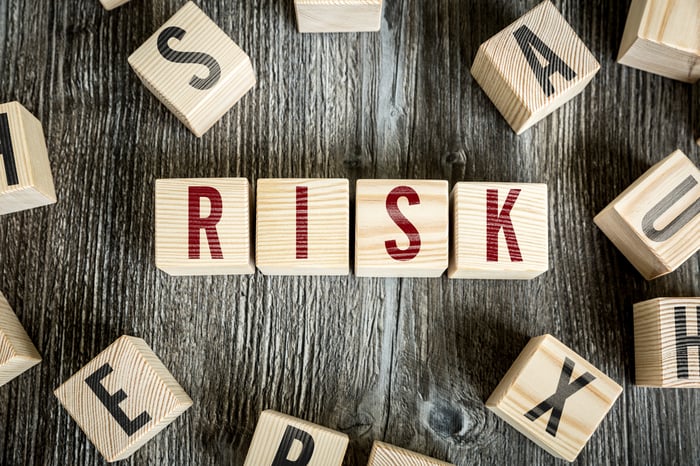 Boiled down to the most basic level, there are four types of risk long-term investors need to evaluate, all of which are interrelated at some level.

Tesla is less risky in these two respects

I consider the first risk above to be the most important. If the history of capitalism teaches us nothing else, it's that competition will forever be trying to unseat the top dog -- and that's generally a good thing for us consumers.

But on this facet, I believe Tesla has a fairly strong moat, especially for a car company. That moat comes by way of a strong brand and the goal of lower-cost production.

Tesla's brand is stellar -- particularly where electric vehicles (EVs) are concerned. While Interbrand recently ranked it as the 98th most valuable brand globally -- far behind Toyota, Honda, and Ford -- there's some nuance that needs to be understood: it's simply a smaller car company, in terms of vehicles on the road, than most global players.

Said Interbrand's Jim Hoostal: "Tesla brand...continues to be stellar...People know Tesla is about the environment. And from a retail-channel standpoint, they have complete control of their brands."And if you're looking for hard numbers to back this up, look no further than Model 3 reservations.

On the low-cost production front, Tesla's gigafactories could provide the company with substantially lower costs for batteries in the future once it's complete, helping to undercut the competition on pricing. The company will also need to get better at manufacturing and optimizing capacity utilization.

And when it comes to management, though many have their qualms with the way CEO Elon Musk conducts his business, few can argue he doesn't have skin in the game. As of the most recent proxy, he held 22% of all shares outstanding. His interests are solidly aligned with those of shareholders.

Of course, a substantial argument could also be made that Musk's near rock-star status among investors could also pose a unique risk: so many are willing to pay so much for Tesla shares pricisely because of Musk's presence. If something were to happen to him -- say he were to choose to focus on his other projects like the Boring company or SpaceX, fall ill, or perhaps leave to go colonize Mars -- it would have an immediate and negative effect on shares.

But there are real risks here...

When it comes to the company's balance sheet and valuation, however, there are significant risks that investors need to be aware of -- and they are closely intertwined, leading to the very real possibility of a negative feedback loop with cascading losses for shareholders.

Tesla's balance sheet has gotten progressively uglier over the past few years -- thanks in no small part to the acquisition of SolarCity -- which also happened to be run by Musk's cousins. 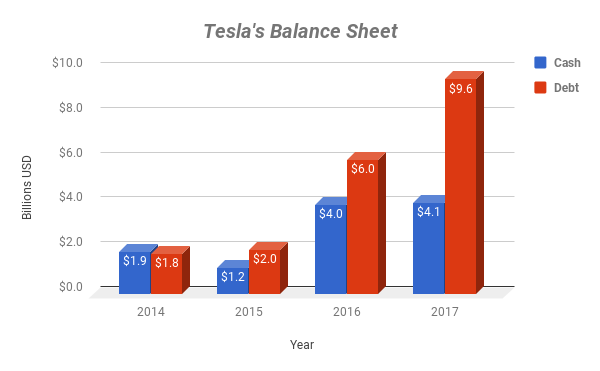 At the same time, operations have been losing money -- on a free cash flow basis -- hand over foot. 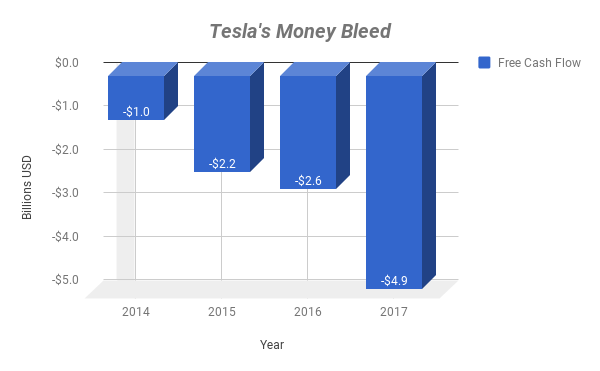 Which brings us to the current predicament. Tesla has been able to fund its operations at such losses because of the warranted optimism behind the company's future.

Musk has gone to the capital markets on a number of instances to dilute shares. In fact, since going public, Tesla has 80% more shares outstanding than it did at the time of its IPO. Musk has also used senior convertible notes to help fund his ambitions. Such loans can be repaid two ways: either by simply paying back the principal, or by converting the loans directly to shares. But that only becomes appealing if a certain "conversion price" is met. The note holders themselves get to choose the method by which they are paid back.

In March 2019, a loan of $960 million will come due with a conversion price of $359.87. That's only 7% higher than where shares stand right now, so it's not impossible to see the loan being converted.

At the same time, however, Tesla's hiccups in Model 3 deliveries has been well documented. If those hiccups -- along with any other variables that could cause Tesla's stock to fall, which are impossible to predict -- come to pass, shareholders could be in for some hurt.

That's because Tesla would either have to secure further debt to pay for the loan -- and rates have been going up for Tesla as bond investors have fretted over the company's finances -- or issue more shares. If an announcement on those shares is made, it's likely the stock will react negatively, as shareholders would have to endure further dilution. The dilution itself wouldn't be the primary concern, but investors could take it as a warning sign of things to come -- leading to a falling stock price and a more difficult time accessing capital in the future.

How I'm approaching this

Currently, I own a very small number of Tesla shares -- all due to the fact that the company acquired SolarCity, which I owned at the time. Because this is such a small part of my portfolio, I plan on holding my shares: Musk has proven adept at proving the naysayers wrong and making monumental shifts in his industry while doing it. If the company can deliver enough cars to meet expectations and its debt obligations, it could be smoother sailing in the days ahead.

At the same time, I have absolutely no intention of adding any shares. The threat of Model 3 production lags already looms, but there are any number of "unknown unknowns" that could cause a cascade: Tesla could have to raise capital to meet debt obligations, which would cause the stock to dive, which would make it even harder to raise debt, and so on.

That's not a feedback loop I want to be overly exposed to, and it's a risk all Tesla shareholders need to consider.