Johnson & Johnson (NYSE:JNJ) CEO Alex Gorsky, along with CFO Dominic Caruso, sat down on Monday to answer questions at the annual J.P. Morgan Healthcare Conference. It didn't take Gorsky very long to make what might initially seem like a provocative statement. He said J&J should be "creating a crisis worrying about how Amazon (NASDAQ:AMZN) will disrupt our business."

Not only did Gorsky state that Johnson & Johnson will indeed be able to create a crisis, he also predicted that it will help the company outperform the market. Here's more of what Gorsky and Caruso said at the J.P. Morgan conference. 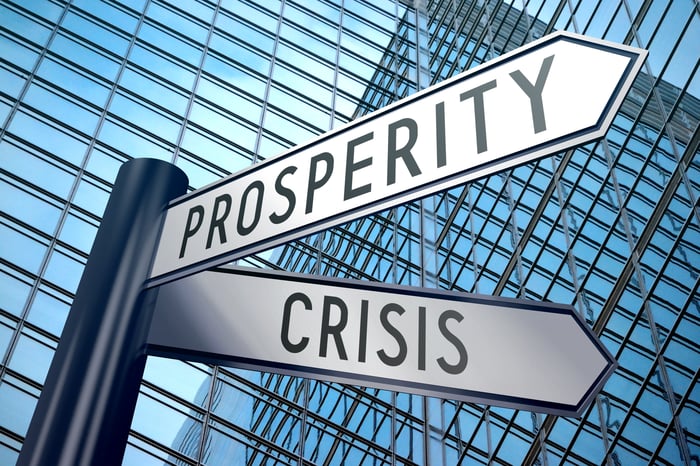 Bring on the crisis

Gorsky's comment about the need to create a crisis came in response to an initial question about how the healthcare landscape has evolved in recent years. He replied that it's a "remarkable time when you think about science and technology." In the 1990s, Gorsky said, the biopharmaceutical industry caught a lot of flak for developing "me-too drugs" that didn't make a significant difference for patients.

The good news, though, according to Gorsky, is that it's a different dynamic now. He highlighted the rise of immunotherapies and unprecedented treatments for diseases including hepatitis C and HIV. What he didn't mention, though, was that J&J hasn't been a leader in advancing these therapies.

However, J&J is active in another area of radical change Gorsky cited: robotic surgery. The company partnered with Google parent Alphabet (NASDAQ:GOOG) (NASDAQ:GOOGL) to form Verb Surgical, which is focused on combining machine learning, instrumentation, advanced visualization, and data analytics to create a new robotic surgery system. Verb has a working prototype, but it hasn't brought a product to market yet.

Gorsky acknowledged that the pace of change in the industry is likely to rapidly increase in the years ahead. That's why he has called on his own company to "create a crisis." He specifically mentioned Amazon, probably because of growing speculation that the e-commerce giant plans to jump into the retail pharmacy business and possibly the pharmacy benefits management business.

But can a huge company like J&J create a crisis mentality like Gorsky wants? He identified three keys for the company to be able to do it. First, Gorsky said J&J would need to be "completely agnostic about the source of innovation." By that, he meant the company should innovate internally as well as partner with external organizations.

Next, Gorsky stated that the company would need to be creative about how it does partnerships. He pointed to the acquisition of Actelion as an example of how J&J has been creative in its partnerships. As part of the purchase of the Swiss drugmaker, Actelion's research and development unit was spun off as a separate entity.

Finally, Gorsky said that a continued focus on operational excellence even in the midst of the "crisis" was critical. He maintained that J&J needed to think like it was "running a tractor factory."

One area where's there not a crisis

Not all of the talk at the J.P. Morgan conference was about a crisis mentality. In one area, there is perhaps less of a crisis than ever before -- tax rates.

J&J CFO Dominic Caruso has been a big proponent of corporate tax reform in the U.S. for a long time. Caruso said that he was involved "quite a bit on crafting of legislation that would make [Johnson & Johnson] more competitive on a global scale." He added that he thought the tax plan President Trump recently signed achieved that goal.

Caruso liked that the new corporate tax rate of 21% is now below the average 25% tax rate of major economically developed nations. He also especially appreciated that tax reform will allow J&J "freedom to access cash abroad without a punitive system of taxation." He maintained that the changes will both benefit the U.S. economy and create American jobs.

How will tax reform change J&J's strategic plans? Caruso said J&J wouldn't have to resort to borrowing money in the U.S. to fund initiatives while it has lots of money overseas. He also stated that tax reform will give the company more flexibility in its capital allocation efforts.

However, J&J's capital allocation hasn't changed a bit, according to Caruso. The company will continue to first prioritize investing in the business, followed by paying a strong dividend, mergers and acquisitions "at the right price," and share buybacks.

Yes, talking about "creating a crisis" is the kind of thing any CEO of a large company is likely to say. But with sales for J&J's top-selling drug, Remicade, on the decline, investors should be glad that Gorsky is at least mouthing the words. The reality, though, is that J&J isn't in a crisis. The company continues to perform well overall.

One thing that Gorsky said ties into something that Caruso said. Gorsky talked about being creative in forming partnerships, citing the Actelion acquisition as an example, while Caruso spoke about more flexibility in allocating capital. I think J&J will be able to prevent a true crisis from brewing in the future by using its new financial flexibility provided by tax reform to make further acquisitions and licensing deals.

The final words out of Gorsky's mouth at the J.P. Morgan session might be the most important for investors in 2018: "We're always looking for the right kind of opportunities." I expect some of those opportunities to manifest themselves in the not-too-distant future.