Daniel Miller, Travis Hoium, and John Rosevear
(TMFTwoCoins)
Author Bio
As a Motley Fool Industrial Specialist, I use my marketing and business background in the automotive industry to evaluate major automakers and other large industrial corporations. Follow me on twitter for tweets about stocks, cars, sports, and anything I find amusing. Follow @DanielMillerTMF

While serious driverless car research and development has been happening for years, 2017 might very well mark the year it became clear to the masses that driverless vehicles are the future -- and will be showing up sooner rather than later. Over the past few years, nearly every large automaker has announced self-driving vehicle programs or partnerships; even Silicon Valley tech companies have been quick to go all-in on developing some aspect of driverless car technology. Driverless cars will be the story of the future, but some of the most interesting stories could very well be from 2017. 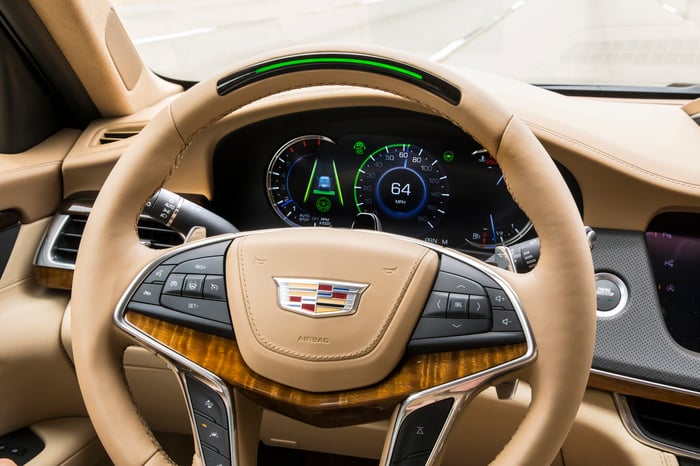 How did that happen? Here are the high points:

Long story short: GM's self-driving system appears to be among the most advanced in the industry. There may be one or two ahead of GM's, but GM -- uniquely -- has the car and the production line -- ready to go as soon as its system is ready.

The kicker: If GM can be first (or even second) to deploy self-driving cars at scale, it could enjoy a significant (and significantly profitable) first-mover advantage. That makes GM's self-driving story in 2017 a very big deal.

Finally, a way to invest

Daniel Miller (Investing in autonomous): Take a mere glance at the automotive industry, and you can see a wide range of companies developing driverless vehicle technology. Companies that range from parts suppliers in Detroit to tech companies in Silicon Valley are all positioning themselves for the future of driverless cars. Despite all the action, investors have so far been left without a direct driverless company to invest in -- that is, until Aptiv PLC (NYSE: APTV) was spun off from Delphi Automotive (NYSE:DLPH).

Delphi is a giant auto-industry supplier and is known for its powertrain components and systems for internal combustion engines. And while that's a healthy business, Aptiv's focus on electrical systems and driverless car technology should warrant a higher multiple on Wall Street thanks to better margins and more lucrative growth prospects. Already, Aptiv is a major player in self-driving and boasts partnerships with Intel, Mobileye, and BMW, among many others.

Beyond its number of partnerships to develop crucial technology, Aptiv doubled down when it acquired nuTonomy Inc. for about $450 million. The move brings in the privately held software firm, founded as recently as 2013, and more importantly, it brings in 100-plus employees including 70 engineers and scientists, that doubled Aptiv's autonomous team overnight.

Aptiv has come a long way from starting as a division of General Motors. And while its legacy powertrain business was solid, it's clear with Aptiv's spin-off that the future of driverless vehicles is so tantalizing, it's forcing companies to adapt rapidly. Driverless cars will be the story of the next two decades, and investors can expect Aptiv to play a massive role down that road.

Intel gets into the auto business

Travis Hoium (Intel/Mobileye): I think the biggest story in self-driving in the past year has been Intel's $15.3 billion acquisition of Mobileye, a self-driving technology leader. The combination makes Intel a formidable force with technology and self-driving partnerships with 27 car manufacturers around the world.

Intel's (NASDAQ:INTC) decision to buy Mobileye goes far beyond just having a piece of the technology built into the car; it will fold vehicle sensors into the company's massive cloud and server business long term. Cars won't have the world of maps onboard at all times, but rather will be pulling data about roads, traffic signs, and other important information as it's needed from the cloud. Mobileye allows Intel to provide solutions from the sensor to the cloud. Since automakers don't have the technology or bandwidth to develop their own sensors, maps, and cloud infrastructure for self driving vehicles, they'll have to lean on someone, and Intel now became a frontrunner in the autonomous driving business.

We don't know exactly what the future of self-driving cars or autonomous ride sharing looks like, but we now know that Intel is taking a big swing at being a key player. That's not something everyone would have guessed coming into the year, and it could help shape self-driving technology for the next decade.