Shares of networking hardware giant Cisco Systems (NASDAQ:CSCO) rose 26.7% in 2017, according to data provided by S&P Global Market Intelligence. Most of those gains came late in the year, after the company reported solid quarterly results in November and guided for its first year-over-year revenue increase in two years.

Through Nov. 14 -- the day before Cisco's fiscal first-quarter 2018 report -- the stock was up about 12.6% in 2017. It trailed the S&P 500 by about 2.5 percentage points at that point, though it had consistently beaten revenue and earnings expectations. However, Cisco hasn't reported a year-over-year increase in revenue since the end of 2015, which likely contributed to the lackluster stock performance.

With its Q1 report, Cisco changed the story. It beat on revenue and earnings, and also guided for revenue growth of 1% to 3% in Q2. That growth is anticipated despite an ongoing 1.5% to 2% revenue hit from Cisco's shift to subscription products and a recurring-revenue business model.

This forecast return to growth offered some evidence that Cisco's somewhat painful transition toward software, services, and subscriptions is finally paying off. The stock gained 12.5% in the last month and a half of the year, trouncing the S&P 500's 3.7% gain for the period. For the full year, Cisco outperformed the index by more than seven percentage points. 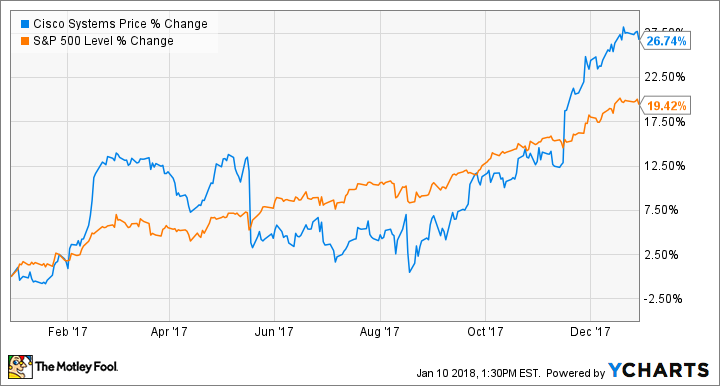 In its fiscal Q1, revenue from recurring sources accounted for 32% of the company's total, up three percentage points year over year. It's not only pushing subscriptions in smaller segments like security, but also in its core business areas. Cisco's latest Catalyst 9000 line of switches comes with a subscription by default, and CEO Chuck Robbins said on the Q1 conference call that the vast majority of its customers upgraded to its most advanced subscription offer.

Cisco should also benefit from the tax overhaul passed late last year. Management has said they planned to ramp up share buybacks if the company was allowed to repatriate cash at a favorable tax rate -- which it now can. No concrete announcement has been made yet, but tens of billions of dollars in additional stock repurchases could be on the table.

Cisco stock isn't nearly as cheap as it was at the start of 2017, trading as it is for around 16 times the average analyst estimate for adjusted fiscal 2018 earnings. But it's still not overly expensive, especially with a major buyback expansion looming. The company will still need to prove its return to revenue growth is sustainable, but if it can, this stock could be in for another good year.