For the second day in a row, shares of American Airlines Group (NASDAQ:AAL) closed higher on Thursday -- up 4.9% on the day, and up 8.3% since Tuesday.

Why the sudden acceleration?

On Wednesday, American Airlines filed an 8-K report with the Securities and Exchange Commission, updating investors on its performance in the fourth quarter. Management said that it expects "total revenue per available seat mile (TRASM) to be up 5.0 to 6.0 percent year-over-year" in Q4. Pre-tax profit margins are also looking healthier, and are expected to range from 6.5% to 7.0%. 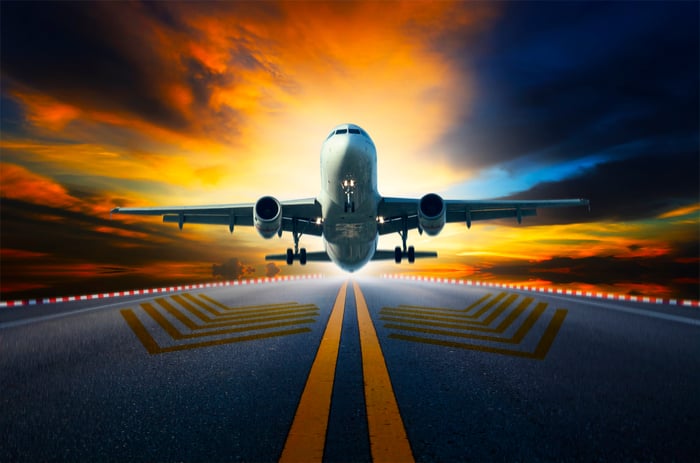 American Airlines' new numbers look significantly better than what it had previously guided investors to expect: TRASM growth of 2.5% to 5.0%, and pre-tax profit margins of between 4.5% and 6.5%.

Additionally, American's comments regarding its increases in capacity (that is, buying more planes) suggest the company will be able to maintain high profit margins. "Total system capacity" grew only about 1% year over year in 2017, management says, with domestic capacity flat and international capacity rising 4%. So long as American doesn't add planes faster than it's adding revenue derived from those planes, it follows that the company won't be forced to discount prices to fill seats.

One factor does bear watching, however. American noted that it expects fuel prices to average between $1.88 and $1.93 per gallon in Q4 -- significantly higher than its average fuel cost for the full year of between $1.69 and $1.74 per gallon. If fuel prices continue rising, this could pinch profit margins no matter how much restraint American shows in its rate of capacity expansion.