Intuit's appreciation is remarkable given that it began the year with a market capitalization of near $30 billion. Software behemoths of this scale don't regularly grow by nearly 40% in a single year. However, the company's small-business ecosystem, led by its flagship cloud-accounting software, Quickbooks Online, or QBO, saw phenomenal growth in 2017.

During the company's 2017 fiscal year, which concluded in July, QBO subscribers increased by 58% and the platform ended the year with roughly 2.4 million active subscribers. Intuit was also able to scale its new "Quickbooks Self-Employed" product to 390,000 subscriptions during the fiscal year.

The rapid growth of the small-business ecosystem paced Intuit's fiscal 2017 revenue increase of nearly 12%, to $5.2 billion. In the first quarter of fiscal 2018 (through October month-end), QBO subscribers continued to surge, growing 56% year over year. This, in turn, pushed revenue up 14% versus the comparable quarter.

Of course, despite QBO's success, expanding online tax-preparation revenue through the organization's TurboTax software remains a priority for management. The company continues to derive the majority of its profit during tax season. In the first quarter of fiscal 2018, Intuit launched TurboTax Live, which allows customers to consult with a tax expert in real time when preparing their tax returns. The service aims to reduce attrition of customers who abandon TurboTax software when encountering complex tax situations. 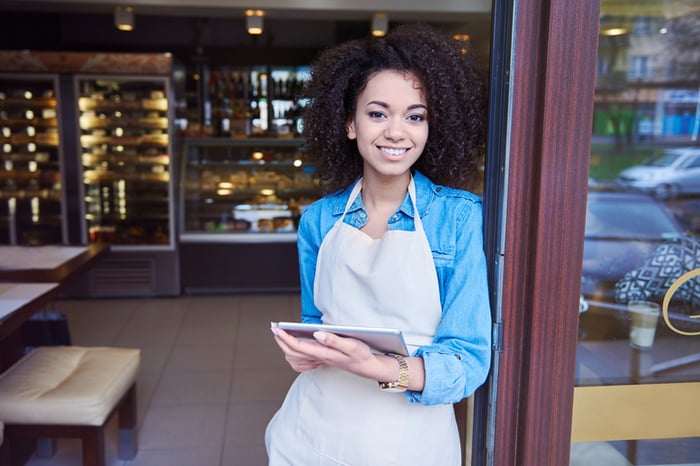 As the company heads into the current tax season, it's launching still another tax innovation, "Turbo." TurboTax customers who also use Intuit's personal-finance software, Mint, will now be able to receive customized loan offers after completing their taxes. With a customer's permission, Intuit will use IRS-verified income, combined with credit-score data from Mint, to obtain financing offers for home, auto, and other personal loans from qualified lenders. At the outset of 2018, Intuit is implementing its next wave of innovation, as it vies to maintain the growth rate of a much smaller company.