2017 was a problematic year for Nike, Inc. (NYSE:NKE), as both revenue growth in its core North American market and profits slipped toward the end of the year. Still, the stock still managed to post respectable gains thanks to a late-stage rally. According to data from S&P Global Market Intelligence, the stock gained 23% last year.

As the chart below shows, shares were volatile through much of the year, but surged after the company unveiled its revamp plan at its Investor Day conference in October. 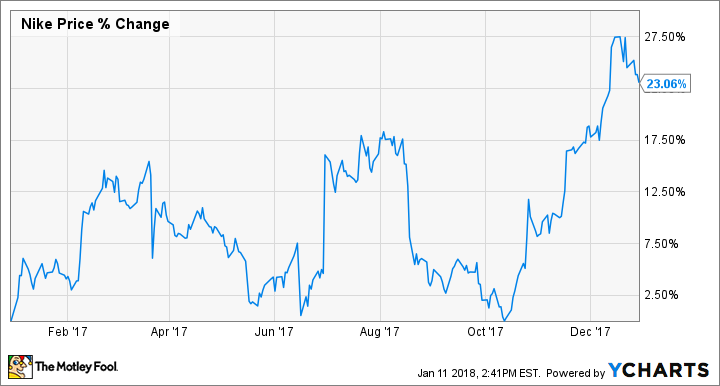 Like rival Under Armour (NYSE:UA) (NYSE:UAA), Nike is struggling with disruption in traditional retail channels in its home market, as chains like Sports Authority have gone out of business and mainstays like Dick's Sporting Goods and Foot Locker have seen comparable sales fall recently after several years of solid growth. Meanwhile, Adidas (OTC:ADDYY) has been ascendant in North America, capitalizing on the popularity of vintage fashions like the Superstar and Stan Smith, and newer models like Boost, NMD, and Yeezy.

In June, Nike announced the first step in its turnaround strategy with the Consumer Direct Offense, a plan to speed up innovation, and bring products to market faster. It also said it would focus on the direct-to-consumer channel and "deeply serve customers" in 12 cities across the globe. Later in the month, the stock spiked as the company beat estimates in its fourth-quarter report and said it was testing a pilot with Amazon, a partnership it had long avoided as it didn't want to dilute its brand.

The stock gave up those gains in August on a weak Foot Locker earnings report; it continued to lag in September as the company posted flat revenue growth and a 22% decline in earnings per share in the first quarter. Then the stock got another boost after the company elaborated on its direct-to-consumer plans during the Investor Day Conference in October. But shares slid back at the end of December, due to declines in earnings and North American revenue in its fourth-quarter report.

Looking ahead to 2018, Nike appears to be positioning itself well for the long term; its focus on the direct-to-consumer channel makes sense, considering the upheaval in retail. However, with earnings moving in the wrong direction and the valuation looking stretched after the recent rally, it may be hard for the Swoosh to replicate last year's gains.