With its library of 500 million reviews and an average of 390 million monthly visitors, TripAdvisor (TRIP -1.89%) bills itself as the world's largest travel community. Over the past few years, however, these prized assets haven't translated into the kind of growth investors seek. As a result, TripAdvisor's stock has dramatically underperformed fellow online travel companies Priceline (BKNG -4.48%) and Expedia (EXPE -2.18%), falling by roughly 53% since the beginning of 2015. Here's a rundown of what investors will be looking for this year as TripAdvisor attempts to get its groove back. 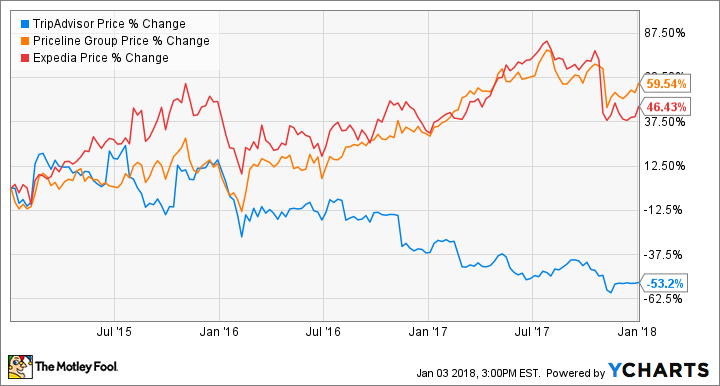 Turn more of those eyeballs into revenue

TripAdvisor has always been known primarily as a place to research trips, with reviews covering 7 million hotels, restaurants and attractions. Research from comScore shows that the company influences an incredible 40% to 50% of all hotel reservations globally. What TripAdvisor isn't nearly as well known for is its ability to help users compare prices and book their hotel stays. 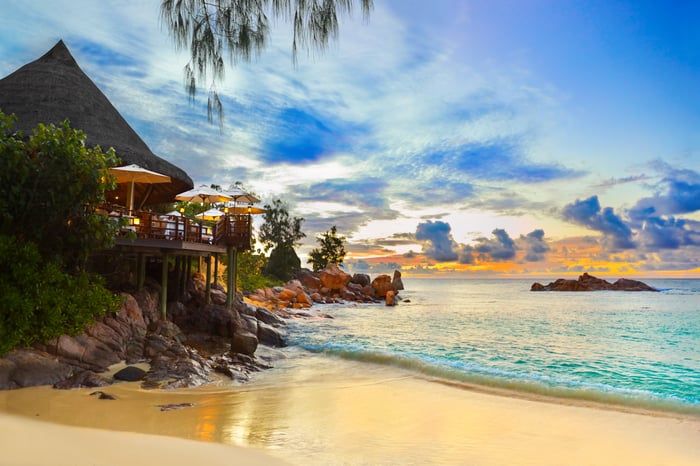 The company's instant booking feature was designed to take advantage of this opportunity, allowing users to book hotel stays directly on TripAdvisor without clicking away to another site. The problem? Upon launch, instant booking didn't always provide the best price even when it was the most prominent option. Not surprisingly, users didn't embrace the new feature, causing revenue per hotel shopper to fall significantly.

In the first half of 2017, TripAdvisor began to downplay instant booking when it didn't offer the best price, and the hotel segment managed to achieve positive revenue growth for two consecutive quarters. But last quarter, hotel segment revenue fell year-over-year again, as it became clear the shift to a booking model wasn't gaining traction as quickly as expected, and advertisers also lowered the price they were willing to pay for the click-based leads they get from TripAdvisor.

The company is trying to overcome these headwinds with a big TV campaign that emphasizes TripAdvisor's price-comparison and booking capabilities. Launched last year, initial results show that awareness of Tripadvisor as a booking site has grown -- but so far, that hasn't translated into actual revenue growth. With one quarter remaining to report, the company's full-year 2017 guidance is for flat click-based and transaction revenue (the biggest portion of hotel revenue). Beating that guidance would be the first indication that the advertising campaign is actually changing consumer behavior -- which was the whole point of instant booking in the first place.

Narrow the gap in desktop and mobile monetization rates

Compounding TripAdvisor's problems is the ongoing consumer shift to mobile devices. Consistent with broad industry trends, TripAdvisor's mobile traffic has risen dramatically over the past few years, to a new high of 45% of hotel shoppers in Q3.

The good news is that TripAdvisor streamlined its user experience earlier this year to make it more appealing and intuitive to mobile users. The bad news is that the company's mobile monetization rates still lag far behind the rates for desktop users (the last reported figure was 30% of desktop rates). And while the company says mobile monetization has improved for three consecutive quarters, the lack of updated figures tells me things probably aren't getting better as quickly as management had hoped. As a percentage of traffic, mobile should only continue to rise over time, creating a sustained revenue headwind for the foreseeable future.

Keep the non-hotel segment on its impressive trajectory

TripAdvisor's non-hotel segment -- comprised of attractions, restaurants, and vacation rentals -- is much smaller than the hotel segment, contributing roughly 23% of revenue year to date. But it's also growing quickly, with revenue up 26% in the most recent quarter -- helping make up for the hotel segment's generally poor performance.

Interestingly, the company's non-hotel segment isn't being held back by the issues with mobile penetration that the hotel segment is experiencing. That's likely due to people booking activities and restaurant reservations while they're already on a trip, when a mobile device is the most convenient option.

Investors will want to see TripAdvisor keep growing the bookable supply of attractions, restaurant listings, and rentals to match the strong growth in demand. In the most recent quarter, the number of bookable attractions was up 30% year-over-year, while bookable restaurant listings grew by more than 20%. As impressively as this segment has performed, keep in mind it's still just getting started -- TripAdvisor believes the attractions business alone has $1 billion in annual revenue potential.

TripAdvisor began 2017 with high hopes -- and the guidance to match -- of getting back to double-digit revenue growth, as well as double-digit click-based and transaction growth. Unfortunately, as the year unfolded, those initial targets proved unrealistic and the company was forced to revise its guidance downward each of the last two quarters.

Given the clouds still lingering over the largest part of TripAdvisor's business, investors should hope that management's initial guidance for 2018 isn't once again overly optimistic. Under-promising and over-delivering tends to be a much better recipe for happy investors.