Shares of Winnebago Industries, Inc. (NYSE:WGO) had another blowout year in 2017, as a strong economy and low gas prices helped boost demand for the company's recreational vehicles (RVs) and trailers. According to data from S&P Global Market Intelligence, the stock finished the year up 76%.

As the chart below shows, the stock surged over the second half of the year following a jump after the company's earnings report in June. 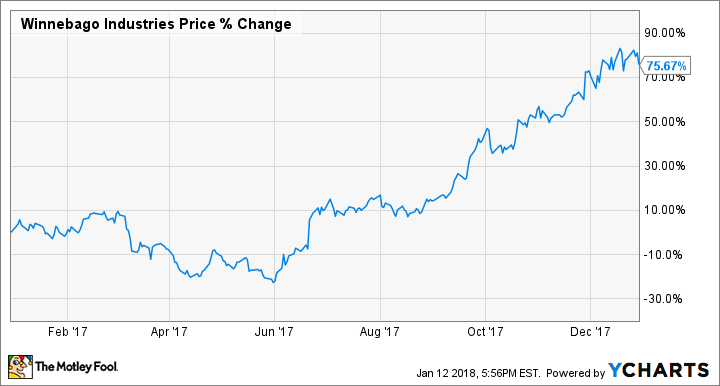 Winnebago rallied toward the end of 2016 after it acquired towables-maker Grand Design in October. However, the stock slumped early in 2017. Shares gained momentarily in March after the company posted strong second-quarter results, including a 37% jump in earnings per share, to $0.48, but resumed their slide for the next two months.

However, after Winnebago's third-quarter earnings report, its stock spiked 14% as the company crushed expectations and adjusted earnings per share increased from $0.53 to $0.94. In addition, CEO Michael Happe touted the integration of Grand Design, which he said was exceeding expectations. 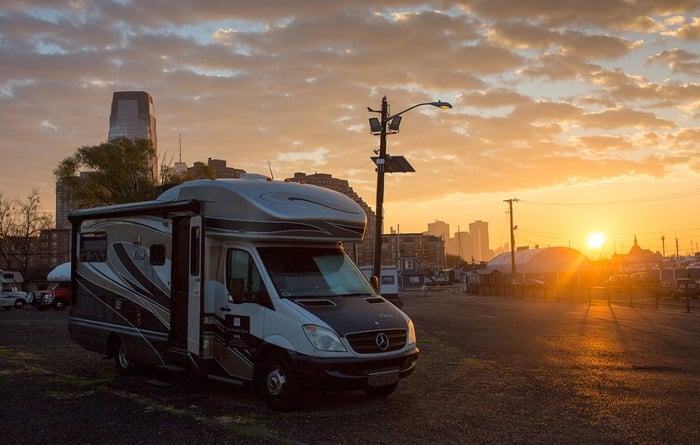 After a respite, shares began rallying toward the end of August on speculation that damage from Hurricane Harvey would drive demand for RVs and other Winnebago products, and the stock continued to run higher through September. In October, Winnebago posted another round of strong quarterly results, with earnings per share up 61%. The company also announced a new share-buyback program, delighting investors.

Gains continued through the end of the year, as retiring baby boomers and a wave of millennial buyers seemed to be driving a spike in RV sales. Rival Thor Industries (NYSE:THO) also jumped last year, gaining 50%.

The stock still trades at a reasonable price-to-earnings ratio of 22, but now that the company has lapped 2016's Grand Design acquisition, growth should slow from the blistering pace last year. Still, given the macroeconomic climate, I expect another solid year for the RV leader.