On Nov. 29, five months after apparently learning of security flaws in some of his company's chips, Intel (NASDAQ:INTC) CEO Brian Krzanich sold 644,135 Intel shares acquired via stock options and another 245,743 shares held directly, according to a filing with the Securities and Exchange Commission. This happened several weeks before the security flaws became public knowledge.

Kzrzanich walked away with over $39 million in proceeds. Naturally that has set off some alarm bells, but is the sale as big a deal as it seems on the surface? Let's dig into what happened and the rules governing these sorts of sales. 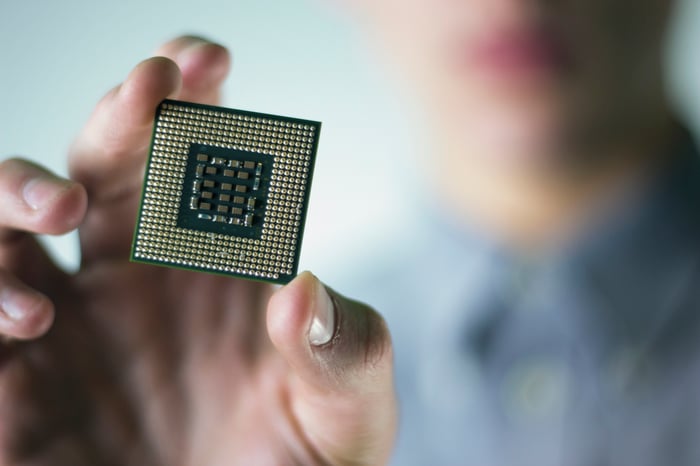 Intel's CEO sold 889,878 shares in the weeks before news of security flaws was made public. IMAGE SOURCE: Getty Images.

First, you need to know a little about how company insiders sell stock.  Sometimes they trade on the open market with stock they own directly. They're operating the same way you or I do in those instances. Yet those instances are rare. More often, company insiders are paying fees to convert options they've acquired as a condition of their employment into stock at a certain "strike price," or cost per share. Converting at a strike price much lower than the current market price is highly profitable.

Yeah, but what about the timing?

OK, I get it. The timing seems weird.

According to The Associated Press, Intel says it knew about the bugs that are now in the news all the way back in June. Google researchers don't confirm the timing in their Jan. 3 blog post on the discovery, saying only that they took action to protect Google services and customers shortly after discovery "last year."

In the meantime, it seems likely that Krzanich knew about the flaws before he arranged to sell.

For its part, Intel spokespersons have made clear to several media outlets what's already apparent from the filings: Krzanich sold under the purview of what's called a 10b5-1 programmed trading plan. When executed as intended, executives adopting the 10b5-1 rule set about to sell stock at predetermined times, automatically, so as to remove all appearances of price-rigging.

That's after Intel learned of the flaws, but let's put it in context. In a March 15 SEC filing in which Krzanich disclosed acquiring 44,172 shares via options and then selling 71,172 shares the same day (March 13), the footnotes show he'd executed the sale in accordance with a 10b5-1 trading plan adopted on Feb. 10. He'd go on to execute more sales under the same 10b5-1 plan on July 3 and Oct. 2 before adopting the new plan on Oct. 30.

To understand the texture of Krzanich's sales this go-round, we'll need to follow up in a couple of months. Will he still be selling under the Oct. 30 plan at that point? How much? The whole point of a 10b5-1 trading plan is that it's a plan and not an excuse to dump. If he's acquiring and selling shares as he always has, then I'd be inclined to believe he wasn't dumping shares to avoid the pitfalls associated with his company disclosing a serious chip flaw.

In the meantime, I'd point out that Krzanich steadily trimmed his holdings in Intel throughout 2017 to where he now holds just 250,000 shares. That's down over 20% from the 315,355 shares he held on Jan. 3 of last year, according to SEC filings. It's also the minimum he must hold to stay as CEO.

So maybe this isn't a case of dumping. Maybe this is just a CEO who, as my colleague Ashraf Eassa pointed out last month, isn't all that interested in the prospects for the business he's leading. Either way, there's good reason to be avoiding Intel stock at the moment.