Brian Richards and Matt Koppenheffer
(TMFBrich)
Author Bio
Now: I work on global strategy for The Motley Fool with a focus on Canada, Europe, and South America. Former: Managing Editor of Fool.com. The longer version: http://www.linkedin.com/pub/brian-richards/31/164/461/.

Bitcoin's meteoric rise has been the #1 financial news story of the past year. It's gone crazy: 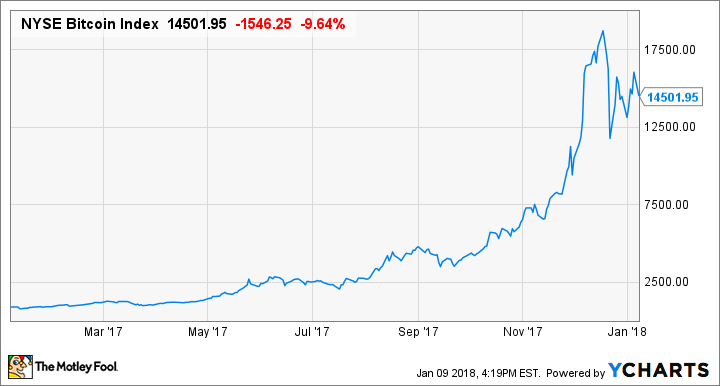 This is all the more impressive given how difficult it is to purchase and store Bitcoin -- at least, relative to buying stocks or bonds or CDs or most traditional financial products.

While it's tough to look at that chart and not think this is a speculative mania, there is something about Bitcoin that's captured the public's imagination -- whether it's the varied potential applications of the underlying blockchain technology, the idea of Bitcoin as "digital gold," or the promise of a currency immune to central banker meddling. Or maybe it's simply a textbook bubble, luring in speculators hoping to get rich. (More likely, it's some combination of the above.) 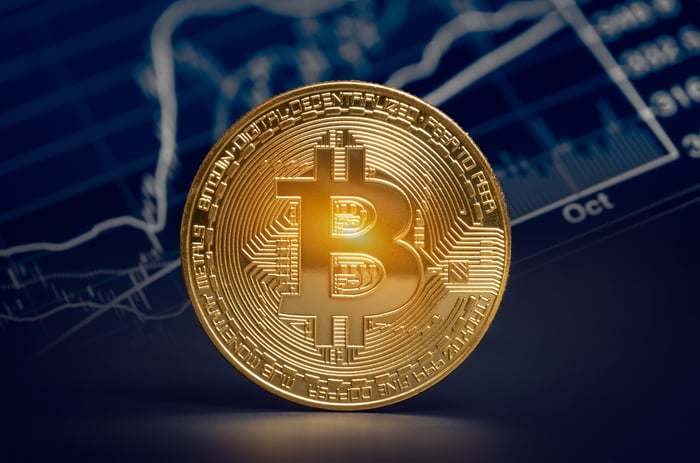 One thing that's been hard to avoid of late is the many dire Bitcoin proclamations coming from regulators and central bankers from around the world.

It's surprising because in our experience, these folks normally speak cautiously. Bitcoin has caused them to lose all timidity.

So for anyone thinking of buying Bitcoin in 2018, we set out to compile as many of these investor warnings as we could in one place. Here they are in their own words, with links to the original source:

Andrew Bailey, head of the Financial Conduct Authority, told the BBC that neither central banks nor the government stood behind the "currency" and therefore it was not a secure investment.

Buying Bitcoin, he said, was similar to gambling—and had the same level of risk.

"It's not a currency, it's actually not regulated in its Bitcoin form," Mr. Bailey told me in an interview for Newsnight.

"It's a very volatile commodity in terms of its pricing. If you look at what has happened this year, I would caution people. We know relatively little about what informs the price of Bitcoin. It's an odd commodity as well, as the supply is fixed. If you want to invest in Bitcoin be prepared to lose your money—that would be my serious warning." [emphasis added]

From the Straits Times:

The Monetary Authority of Singapore (MAS) has issued a strong warning to would-be [Bitcoin] investors to act with "extreme caution" and understand the significant risks of choosing to invest in cryptocurrencies.

"MAS is concerned that members of the public may be attracted to invest in cryptocurrencies, such as bitcoin, due to the recent escalation in their prices," it said in an advisory issued Tuesday (Dec. 19).

Cryptocurrencies are not legal tender, warned MAS. "They are not issued by any government and are not backed by any asset or issuer," it said, noting that the recent surge in the prices of cryptocurrencies is driven by speculation. "The risk of a sharp reduction in prices is high. Investors in cryptocurrencies should be aware that they run the risk of losing all their capital." [emphasis added]

From a speech by Australian Central Bank governor Philip Lowe:

In reality, these currencies are not being commonly used for everyday payments and, as things currently stand, it is hard to see that changing. The value of Bitcoin is very volatile, the number of payments that can currently be handled is very low, there are governance problems, the transaction cost involved in making a payment with Bitcoin is very high and the estimates of the electricity used in the process of mining the coins are staggering. When thought of purely as a payment instrument, it seems more likely to be attractive to those who want to make transactions in the black or illegal economy, rather than everyday transactions. So the current fascination with these currencies feels more like a speculative mania than it has to do with their use as an efficient and convenient form of electronic payment. [emphasis added]

From the Frankfurter Allgemeine Zeitung:

"These are highly speculative transactions with the possibility of total loss," said the head of the Federal Financial Supervisory Authority (Bafin), Felix Hufeld to the Bild newspaper. In the wake of the Bitcoin boom, there will be "excesses that produce bitter losers," warned Hufeld. Therefore, every Bitcoin investor must act with "the utmost caution" and know that "in the worst case, he can lose all his money." [emphasis added]

With Bitcoin's price recently skyrocketing, the Bundesbank warns savers against investments in the digital currency. "In our view, Bitcoin is not a suitable medium as a store of value. That's shown in even a quick glance at the wild fluctuations in its price," said Bundesbank board member Carl-Ludwig Thiele to the Welt am Sonntag. Bitcoin is "a speculative object" whose value is changing rapidly.

"China doesn't recognize cryptocurrency as payment and forbids ICOs," Bank of Russia Deputy Governor Dmitry Skobelkin told reporters Thursday, after meeting with Chinese central bank officials earlier in the week. "Our views are absolutely similar. In our view it's a sort of a financial pyramid that may collapse at any moment." [emphasis added]

Central Bank First Deputy Governor Sergei Shvetsov told a conference in Moscow that the [crypto-currencies] were "dubious" and investors needed to be protected. "We cannot stand apart. We cannot give direct and easy access to such dubious instruments for retail (investors)," Shvetsov said.

[Bitcoin] comes with legal risks and is also not a currency. "It is a betting chip for gambling and is seen by central banks as a matter of concern," said [Austrian Central Bank Governor Ewald Nowotny] in a report by the APA. [emphasis added]

"Bitcoin lacks the one thing that makes a good currency, namely stability," [Ewald Nowotny] told Austrian daily Kleine Zeitung in an interview published on Wednesday. "Bitcoin is an object of speculation," he said.

The People's Bank of China warned about cryptocurrencies and ICOs:

There are multiple risks in coin offering fundraising and trading, including risk of false asset, risk of operation failure, risk of speculation, and etc. The investors shall take investment risks on their own and be cautious of frauds and scams.

But also deemed it flat-out illegal:

Financing through coin offerings refer to financing bodies raising virtual currencies such as Bitcoin or Ethereum from investors through illegal sales and circulation of crypto currency or tokens. Such offerings, in essence, are unauthorized and illegal public fundraising and are suspected of involving in criminal activities such as illegal selling of tokens, illegal issuance of securities, illegal fundraising, financial fraud and pyramid schemes ... From the date of release of this Notice, fundraising through coin offering shall be banned immediately. Any individuals or organizations that have completed fundraising through coin offering shall make arrangements to return the funds raised, and to ensure that the legitimate rights and interests of the investors are protected and the risks involved are properly managed. [emphasis added]

And in December, PBOC governor Pan Gongsheng doubled down on the need for that move, according to a quote in Yicai Global:

If we didn't shut bitcoin exchanges and crack down on initial coin offerings (ICOs) a few months ago, and if more than 80% of the world's bitcoin transactions and financing activities were still taking place China, which was the case back in January, what would it be like today? It's scary to think about.

South Korea's central bank chief on Wednesday warned of 'irrational exuberance' in trading of virtual coins, which have risen dramatically in value this year amid frenzied speculation.

"Looking at recent frenzy over virtual currencies worldwide, I worry whether there is some dose of irrational exuberance there," Bank of Korea Governor Lee Ju-yeol said over a year-end event with reporters on Wednesday night.

Last February, the Reserve Bank of India issued this warning:

Attention of members of public is drawn to the Press Release issued by the Reserve Bank of India (RBI) on December 24, 2013, cautioning users, holders and traders of Virtual Currencies (VCs) including Bitcoins regarding the potential economic, financial, operational, legal, customer protection and security related risks associated in dealing with such VCs.

Which echoed a previous warning that included:

There is no underlying or backing of any asset for VCs. As such, their value seems to be a matter of speculation. Huge volatility in the value of VCs has been noticed in the recent past. Thus, the users are exposed to potential losses on account of such volatility in value.

And more recently, The Times of India reported a step-up in tone at the RBI:

"There is a real and heightened risk of investment bubble of the type seen in Ponzi schemes, which can result in sudden and prolonged crash exposing investors, especially retail consumers losing their hard-earned money," the statement said. "Consumers need to be alert and extremely cautious as to avoid getting trapped in such Ponzi schemes," it added. [emphasis added]

"It looks remarkably like a bubble forming to me," Reserve Bank of New Zealand Acting Governor Grant Spencer said in interview with TVNZ broadcast on Sunday. "Over the centuries we've seen bubbles, and this appears to be a bit of a classic case. With a bubble, you never know how far it's going to go before it comes down."

"You should stay away (from bitcoin). It is deadly," central bank head Lars Rohde said in an interview with state broadcaster DR published online on Monday. ... Rohde said that if people decide to ignore his warnings, they should realize that they are pretty much on their own. "It is not a regulated market. It is not the responsibility of the authorities. It is the responsibility of the individual," said Rohde. [emphasis added]

Will they all be proven wrong?

There is certainly a cynical interpretation of these strongly worded warnings from regulators and central bankers around the world:

Of course they hate Bitcoin -- Bitcoin is aimed at putting them out of a job!

There are three facts worth bearing in mind, though.

First, the experts we've cited are experienced financial minds from many different countries with many different incentives and many different stakeholders. Plainly, all of them are cautioning against "investing" in Bitcoin.

Second, the price of Bitcoin has exploded in a way that is atypical for sustainable, long-term investments, and appears more similar to the price action of a bubble.

Third, supposed experts have talked down the potential around new technologies that later proved invaluable. But these successful technologies still tended to go through a classic "hype cycle," in which they hit a "peak of inflated expectations" before more quietly proving out their value later on.

We're not going to conclude by making our own prediction on Bitcoin's fate. But what do feel fairly certain about is this: If you're considering buying Bitcoin for "investment" purposes today, tread very carefully, and maybe go get some Dramamine. It's going to be a bumpy ride.