As an investor in potash stocks, you'd want to forget 2017. Except if you owned Intrepid Potash (NYSE:IPI). The lesser-known potash player trampled its larger peers Nutrien and Mosaic and jumped a staggering 128.8% last year. The fun part is, Intrepid's run-up had little to do with the potash markets. It was more about salt, water, and oil.

From a company that looked like it would go bankrupt when it breached debt covenants in 2016 amid tumbling sales and profits and landed itself into a severe liquidity crunch, Intrepid bounced back pretty smartly last year. Intrepid not only pared down but also narrowed its losses substantially despite weak potash sales in 2017, thanks to management's efforts to diversify revenue streams and cut costs.

Intrepid's net loss more than halved to $21 million during the nine months ended Sept. 30, 2017, partly because of higher profit margin from potash. The company devised various ways to boost margin, including transitioning to low-cost solar production and prioritizing sales in high-margin locations. Combined with improving potash prices, those efforts helped Intrepid earn $11.4 million in gross profit from potash compared with a gross loss of $24.5 million in the year-ago period. 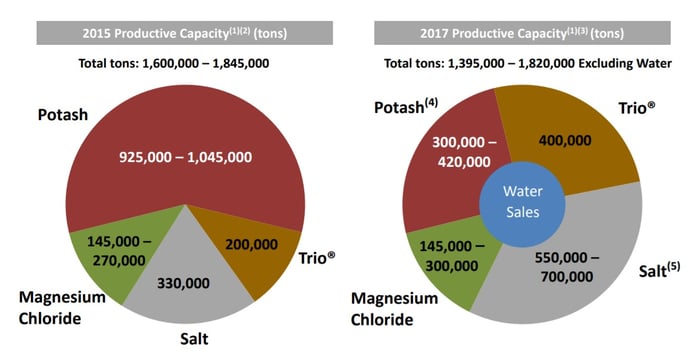 The biggest change, however, can be seen in Intrepid's product mix. In the past couple of years, Intrepid has aggressively diverted resources from potash to its specialty fertilizer Trio, and by-products such as salt and magnesium chloride. Potash made up more than half of the company's production capacity in 2015. Last year, it was down to less than a quarter. 2017 saw management add another by-product to its priority growth list: water.

You see, Intrepid owns more than 30,000 acre feet of water rights in proximity to Permian Basin, a major oil-producing region. Intrepid sees a business opportunity here in supplying water to oil and gas companies, and it believes it can generate $20 million-$30 million in water sales in 2018.

Not surprisingly, investors saw a silver lining in Intrepid's efforts to shift focus from potash to higher-margin by-products such as salt and water and bid the shares up in 2017.

To be fair, it's commendable how Intrepid's management is finding ways to grow the company's top line and strengthen its balance sheet. With oil prices rising, industry experts are pinning hopes on greater fracking production, which could bode well for Intrepid.

However, it's important to note that Intrepid doesn't include water sales in its revenue yet, so it remains to be seen whether water can add any value to the company in the long run. For potash investors, there are better stocks to invest in right now.