Danny Vena, Rich Smith, and Reuben Gregg Brewer
(TMFLifeIsGood)
Author Bio
Daniel W. Vena, CPA, CGMA is a long-term investor searching for intangibles that provide explosive growth opportunities in his investments. He served on active duty with the US Army and has a Bachelor's degree in accounting. Follow @dannyvena
Follow @dannyvena

While baby boomers' retirement goals may vary, ensuring that their nest egg outlasts them is an overriding theme. To that end, investing in the stock market can be an ideal way to achieve those goals. 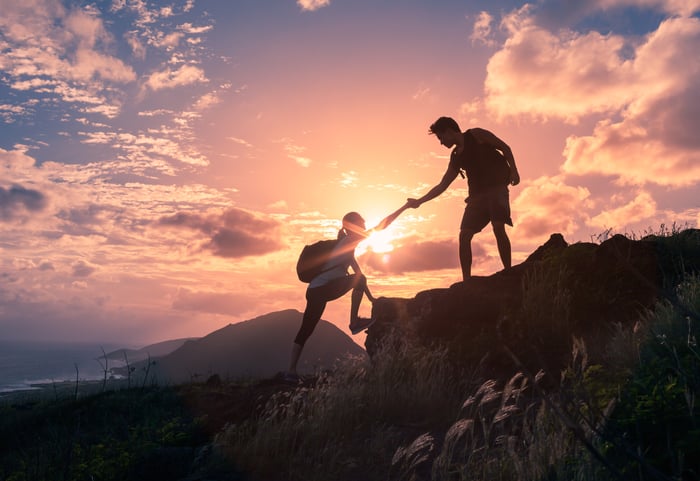 The world's its oyster

Danny Vena (Netflix): While having a portfolio packed with dividend payers can be an important part of any retirement plan, including an element of growth will help ensure those funds will endure. Choosing a company in the early stages of a global opportunity might fit the bill.

There's no question that Netflix already dominates streaming in its country of origin, with estimates at more than half of U.S. homes. The company isn't stopping there, however, and has expanded its operations worldwide. That global journey began in earnest in 2016 when Netflix added 130 more countries to its customer list, and recently announced that its international segment now accounts for more than half its subscribers.

Investors can better understand the magnitude of this opportunity by looking at the results in Netflix's home market. The company has nearly doubled its contribution margin in its U.S. market, from 18.5% at the end of 2012 to 35.8% in its 2017 third quarter. Compare that to the 4.7% it generated from its international segment and you can see the staggering opportunity.

Netflix continues to move toward its goal of eventually producing half its content, which it says is more cost-effective on a per-subscriber basis. This in turn will help drop more money to the company's ever-increasing bottom line. In its 2017 third quarter, net income jumped to $130 million, up 150% over the prior-year quarter.

With a global audience as a backdrop, Netflix stock should help baby boomers reach their goals.

"Assurance" for your investment is this company's middle name

Rich Smith (Aflac Incorporated): What are baby boomers' goals when investing? I tend to think they're the same ones that all of us have: to earn more in dividends than our banks are paying us as interest on our deposits and to buy fairly valued stocks that let us sleep at night. In short, we want to be assured that our investments are safe and profitable. And when I think assurance, I naturally think of supplemental health and life insurance provider American Family Life Assurance Company -- or AFLAC. (Yes, the one with the duck).

With a share price at just 13 times trailing earnings, AFLAC stock costs only about half the average price-to-earnings ratio on the S&P 500. Granted, analysts surveyed by S&P Global Market Intelligence only expect AFLAC's earnings growth rate to be about half the average rate on the S&P as well. That's largely a function of the depressed yen-dollar exchange rate, though. (AFLAC gets about 70% of its revenues from Japan). As Japan's economy strengthens, I wouldn't be surprised to see the exchange rate improve, and AFLAC's dollar-denominated earnings with it -- a factor that's not assumed in the company's guidance.

Meanwhile, AFLAC's dividend yield -- a nice, round 2% -- beats the average yield on the S&P by about 0.1 percentage point -- and its payout ratio on that dividend is a mere 25%, which leaves lots of room for dividend growth over time.

All in all, I see AFLAC as a stable business with a steady dividend that's likely to rise over time. It's growth rate won't set the world on fire anytime soon, but it's a stock that should let you sleep soundly at night, assured that your investment is safe.

Reuben Gregg Brewer (Franco-Nevada Corp.): Investing when markets are going up is easy. Sticking around when the market is falling is a lot harder. But holding tough during the weak spots is exactly what you need to do if you hope to reach your long-term financial goals. And that's where a precious metals stock like Franco-Nevada can help. Gold and silver tend to perform well when other assets, like stocks, are falling because investors are seeking out safe havens. That gives you something to hold on to when the world feels like it's crumbling.

But Franco-Nevada isn't your typical precious metals company because it isn't a miner -- it's a streaming and royalty company. That means it provides cash up front to miners for the right to buy gold and silver at reduced rates in the future. That locks in low costs and provides Franco-Nevada with robust margins even when gold and silver prices are low -- and helps explain how the company increased its dividend every year since its IPO in 2007 despite the deep commodity downturn that occurred during that span. A steadily rising dividend is another anchor for when the storm winds inevitably hit.

Even better, Franco-Nevada's streaming model is designed around diversification. The company currently has investments in 340 assets so a problem at one property isn't likely to derail the overall business. I can't predict the future of the market, but it will certainly include bear markets. Owning a precious metals stock like Franco-Nevada will make it easier to stick out the tough times so you can benefit from the good times.