Shares of motorcycle manufacturer Harley-Davidson, Inc. (NYSE:HOG) fell 10.3% in 2017, according to data provided by S&P Global Market Intelligence, as sales and earnings began to slide. After nearly a decade of improving results following the recession, there may be some cracks in the armor at Harley-Davidson.

The most recent quarterly results show what a struggle it's been for Harley-Davidson in 2017. For the first three quarters of the year, sales in the U.S. were down 8% to $135.6 million and worldwide sales fell 6.1% to $200.6 million. Management has said that people are spending less on motorcycles right now, but we've also seen Polaris' (NYSE:PII) Indian brand take market share from Harley-Davidson with its stylish motorcycles. 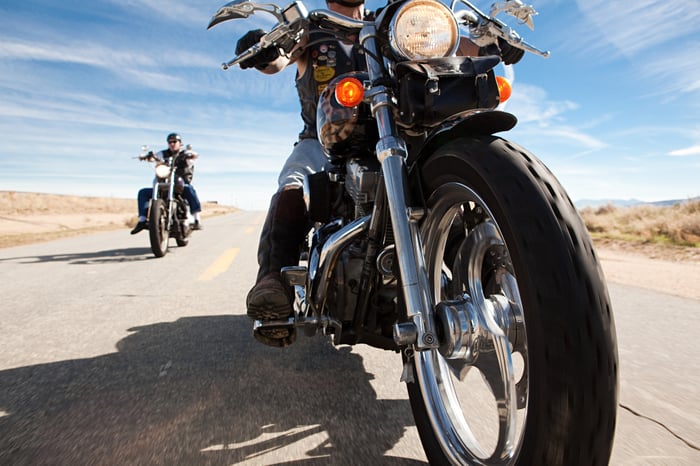 The chart below shows that the declining results aren't a new phenomenon either. There's been a steady decline in revenue and earnings since mid-2014 and it doesn't appear a turnaround is imminent. Management is trying to adapt by introducing eight new models in 2018, but there's no guarantee the strategy will have any success. And if it fails the stock would have a lot further to fall. 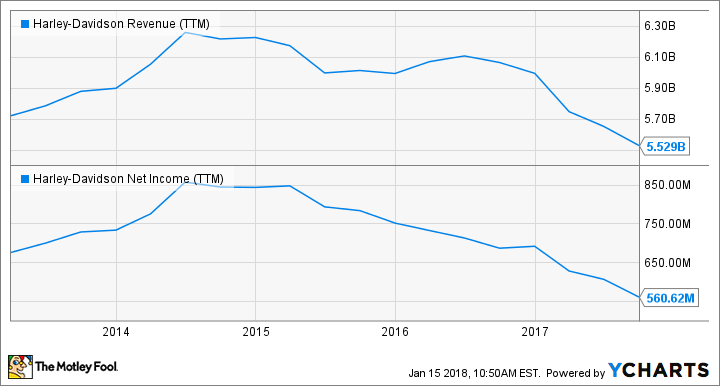 Harley-Davidson's biggest problem is that its core customer base is getting older and it doesn't appear that younger customers are all that interested in, or loyal to, the company's brand. New models are great, but if young riders are more likely to take an Uber than buy a motorcycle the addressable market may be shrinking. I think this is just the start of Harley-Davidson's long-term problems and 2018 isn't likely to be the turnaround investors are hoping for. I'm even confident enough to give a thumbs down CAPScall on My CAPS page, which will track whether or not the stock underperforms the market.