That said, after agreeing to sell its natural gas compression business to USA Compression Partners (NYSE:USAC) for $1.8 billion, it has taken another small step toward reducing its risk. While it's not in the clear just yet, the move does make it a bit less likely that the company will ultimately need to reduce its lucrative distribution to investors. 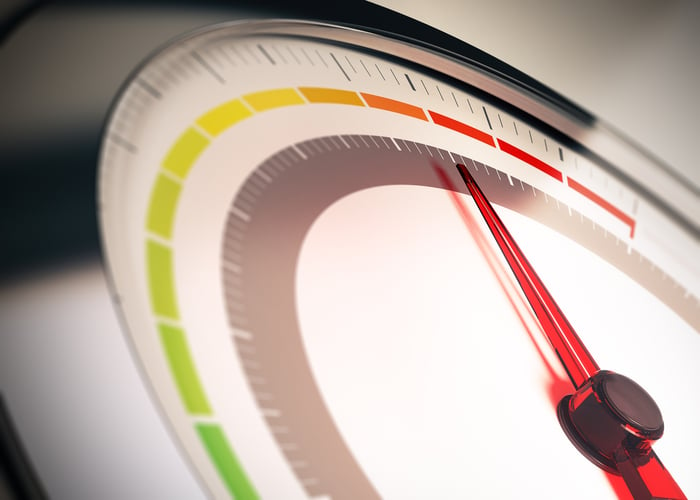 Energy Transfer dialed back its risk a little bit with this deal. Image source: Getty Images.

That cash infusion will enable Energy Transfer Partners to pay down some of its debt, which stood at $33.6 billion at the end of the third quarter, resulting in an elevated leverage ratio of 4.92 times debt to EBITDA. While that's down from a concerning 5.74 times at the start of last year, it's still quite a distance from the company's 4.0 times target, though this deal does take it one step closer. Meanwhile, in addition to that cash infusion, Energy Transfer will receive cash distributions from USA Compression on the units it gets this year, with more cash flowing its way starting in 2019 when the Class B units convert.

While this transaction will help chip away at Energy Transfer's debt, it won't completely solve all the company's problems. One of the biggest in the near term is finding funding for its current slate of expansions -- $10 billion worth of growth projects are expected to go into service by early next year. While it has prefunded a majority of its capital needs this year, it still has to bridge the rest of that gap, which it can't do with debt given its elevated leverage ratio.

In addition to navigating that tight financial situation, the company is one of the few remaining master limited partnerships still paying costly incentive distribution rights (IDRs) to its parent company. That said, Energy Transfer has repeatedly said that it has no plans to undertake an internal restructuring transaction with Energy Transfer Equity until late 2019. That leaves nearly two years of uncertainty on how the company will ultimately address the situation, with many investors fearing that a future transaction will eventually result in a distribution cut given its currently tight coverage ratio.

Energy Transfer Partners continues to take the steps needed to shore up its financial situation, with the USA Compression Partners transaction being the latest move forward. However, it still has much farther to go before its balance sheet will be back on solid ground, and it needs to figure out how best to address those costly IDRs. Until it deals with both issues, this high yield remains too risky, especially when there are safer options out there.