2017 was a blowout year for Wayfair Inc. (NYSE:W) as the home-goods e-commerce specialist saw revenue growth surprisingly accelerate as the company exceeded analyst expectations. By the end of the year, the stock had gained 129%, according to data from S&P Global Market Intelligence.

As the chart below shows, shares began surging in the spring, soaring on a blockbuster first-quarter earnings report, and added gains from there. 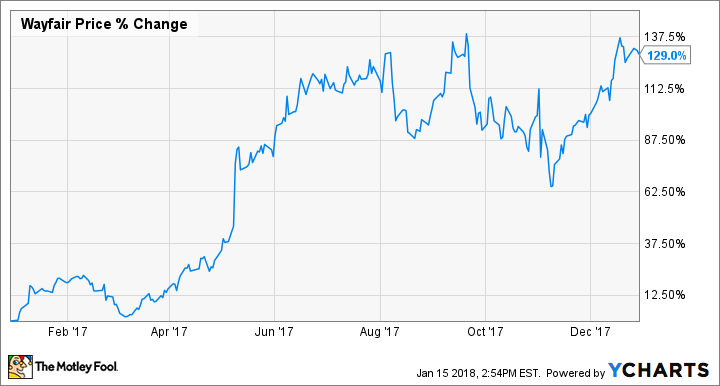 Following its 2014 IPO, Wayfair stock had mostly traded sideways, disappointing investors who were bullish on the growth stock, but the company put aside many of the questions about its potential with a strong performance last year. The stock's biggest day of the year came on May 9, when it jumped 20.7% after the first-quarter earnings report was delivered. Revenue surged 28.6% to $960.8 million, easily beating expectations at just $935.6 million. On the bottom line, the company posted a narrower loss than expected, with a shortfall of $0.48 per share versus an estimate of $0.58.

CEO Niraj Shah said he was pleased with the company's strong momentum and that it was steadily gaining market share in the $600 billion home-goods market.

In June, the stock got another boost when Piper Jaffray raised its price target to $87 from $70 as analyst Peter Keith projected that revenue growth could hold between 30% and 40%. Later in the summer, it slipped on the August second-quarter earnings results, even though Wayfair reported another round of strong growth, with revenue up 42.7%. Investors seemed to use the opportunity to take profits as shares had already doubled so far in the year.

The stock also overcame a weak third-quarter report to finish out the year on an upbeat note as the company posted 53% revenue growth over Black Friday weekend and benefited from the bullish wave in retail stocks on robust holiday sales growth.

Above all, Wayfair stock seemed to have such a good year in 2017 as the company put to rest doubts that Amazon.com would take away its business. While Amazon is planning a push into the home-goods market, Wayfair's acceleration in revenue indicates that its business isn't about to fizzle out and that its name recognition and customer trust is growing. While it still isn't profitable, investors seem happy to give it a pass as long as it's putting up strong sales growth. Shares are up another 7% so far in 2018 so it could be poised for continuing outperformance this year.