What do investors suddenly see in Kohl's Corporation (NYSE:KSS)? Since November, the retailer's shares have soared more than 53%. Personally, I've never been great at discerning the sudden short-term sentiment shifts that can send a favored stock zipping up a weekly price chart. But it's clear that recent operational changes partially explain why investors are giving Kohl's a second look, after roughly three years of hand-wringing over its prospects in the retail sector.

Kohl's has insulated itself from the online reach of both Amazon.com and Wal-Mart Stores (NYSE:WMT) by embracing e-commerce. In an Jan. 8 update on the holiday season, Kohl's management cited growing digital sales as one of the factors behind a better-than-anticipated holiday season, which allowed the organization to boost full-year fiscal 2017 guidance.

But over the space of several quarters, Kohl's has also combined two separate initiatives into a powerful tool to improve margins: inventory management, and square footage optimization.

Let's look at the company's approach to inventory first. When annual sales rise consistently, most retailers concern themselves with having enough inventory on hand, and naturally, identifying the inventory items which will produce the most favorable mix of volume, sales growth, and realized profit. This is especially true during the crucial year-end holiday season, when normal inventory levels can swell by 30% to 40%.

As its sales climbed year after year, Kohl's could focus on having enough inventory and the right inventory. But due to the explosion in online commerce, and declining traffic into traditional brick and mortar establishments, Kohl's revenue has stalled over the last three years. Management has responded by implementing a more balance sheet-oriented approach to inventory.

That is, the organization is looking beyond prospective sales cycles, and recognizing inventory for what it truly represents: an asset which produces cash flows, but also incurs ongoing costs. Finance and storage costs are obvious to most of us, but if you consider it, each time inventory is touched or moved, the company incurs labor costs. Worse, inventory that doesn't sell increases the drag of the committed costs of leased space.

Kohl's began to handle its inventory more proactively after its top-line peaked at $19.2 billion in 2015 (revenue declined to $18.7 billion in 2016). If industry headwinds were going to pinch sales, it made sense to trim inventory levels to manage costs commensurately.

The chart below shows Kohl's inventory balances by quarter over the last five years. The recurring W-shaped pattern is a pretty standard one for retailers. The yearly peaks represent a massive inventory buildup during Kohl's fiscal third quarter (month-end October), followed by a drop as holiday inventory is sold, with lighter fluctuations during spring and summer: 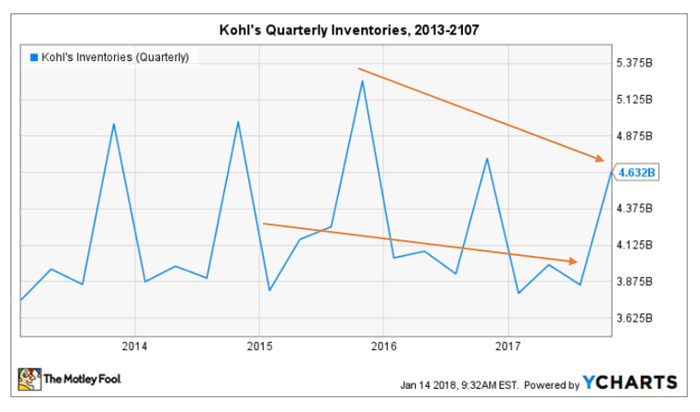 During the last three years, Kohl's has tightened its inventory ramp-up preceding the holiday season, progressively stocking a lower dollar value of inventory each fall, as shown by the top arrow. But it's also managed inventory with heightened discipline during the rest of the year, a trend highlighted by the bottom arrow.

Related to this effort, the company has also rationalized its square footage, going so far as to reduce selling space within 300 of its stores (Kohl's mammoth standard store is approximately 88,000 square feet) and using the extra space to fulfill digital orders, an exercise known as "standard to small."

Here's Kohl's CEO Kevin Mansell in February of last year, in a discussion of fourth-quarter 2016 results, describing standard to small: "It has shown, to date, no result in an impact on sales, but an increase in gross margin due to right-sized inventories, and lower four-wall [sales, general, and administrative expenses] due to lower inventory and more efficient use of space."

Indeed, by the end of 2017, despite a sales decline of 1.3% during the first three reported quarters, Kohl's was able to book an operating margin increase of nearly 1.2 percentage points versus the prior year. 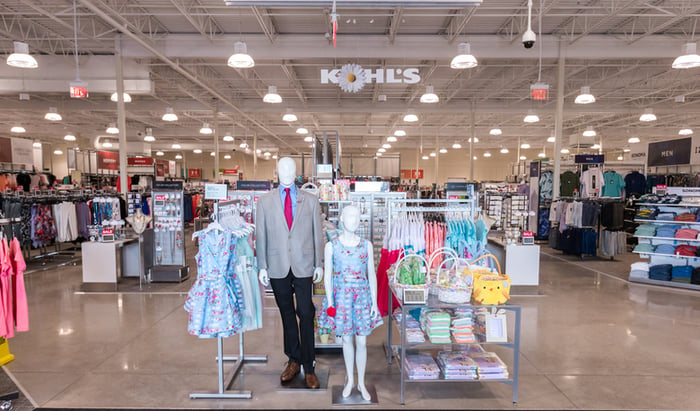 Margins may increase further in the coming years, as Kohl's tests stores that are 35,000 square feet, 60% smaller than traditional stores. The company has placed these diminutive versions in higher-density urban areas, and it now has 12 prototypes in operation across the U.S.

Furthermore, last week, Kohl's CEO Mansell acknowledged in an interview that the company is considering subleasing vacant space in its 300 standard to small stores to retailers in the grocery and convenience store channels. In addition to attaching revenue to unused square feet, the plan could also entice shoppers into Kohl's stores through shared entrances.

Recently, I discussed Wal-Mart's drive to slow its square footage expansion and instead focus on square foot productivity. Kohl's is also chasing higher sales within closer quarters, and I'll go out on a limb and predict that the company's downward trend in sales per square foot, from $231 in 2012 to $224 in 2016, will reverse this year, and show incremental improvement.

Kohl's proactive management of its goods and physical space should ease investors' concerns over Amazon and Wal-Marts' digital sales prowess. By the same principle, the company's announcement of vigorous holiday 2017 sales foreshadows a fourth quarter and full year of higher total profit and increased cash flow, given the margin improvements in 2017. Judging from Kohl's recent share price, market trepidation has been replaced, for now, with enthusiasm over higher earnings prospects in 2018.