Oil prices have been riding high over the past few months, with the global crude benchmark price recently topping $70 a barrel. Several factors fueled this move, including healthy demand growth, OPEC's production cuts, and a slowdown in U.S. shale drilling. That said, while many shale drillers tapped the brakes last summer when crude pulled back, the industry is still on pace to push production much higher. In fact, according to a recent estimate from the U.S. Energy Information Administration (EIA), shale production in the U.S. is about to experience a big-time boost.

Drilling down into the latest report

Each month, the EIA puts out its drilling productivity report, where it details its estimates for production from the nation's seven fastest-growing shale plays. Last month, the EIA projected that oil production from these regions would average 6.4 million barrels per day (BPD) in January, up 1.5% from December. Meanwhile, the latest report estimates that shale output will average 6.55 million BPD in February, or another 1.7% increase. That's a healthy growth rate for crude production, especially considering that shale output had been slipping in recent months. 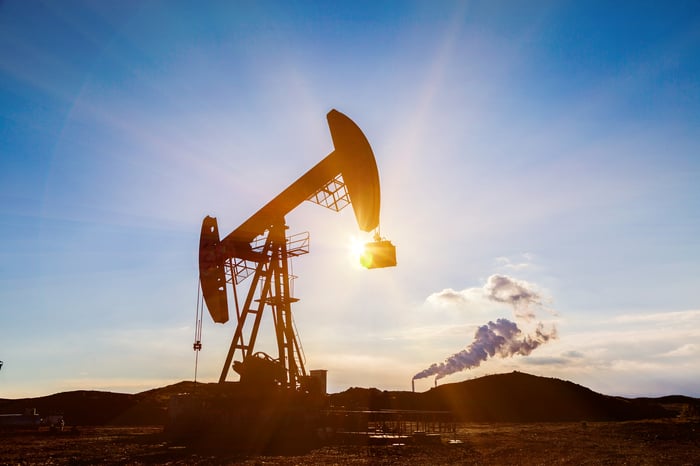 Driving this impressive growth rate is the Permian Basin in western Texas and southeast New Mexico. According to the EIA's estimate, oil production from that one region will rise an impressive 144,000 BPD in the first two months of 2018, up 5.3% from the end of last year. For comparison's sake, it expects the combined oil production from the Bakken and Eagle Ford Shale plays to rise 36,000 BPD over the first two months of 2018. That's mainly because oil companies are focusing their investments on drilling wells in the Permian over others because they can earn higher returns.

For example, Pioneer Natural Resources (NYSE:PXD) owns land in both the Permian and the Eagle Ford. However, Pioneer invested $2.35 billion into the Permian last year, where it's earning returns between 40% to 75% at $50 oil. Meanwhile, it only spent $105 million to develop its assets in the Eagle Ford because returns there are in the 30% to 40% range at $50 oil. WPX Energy (NYSE:WPX), likewise, is investing the bulk of its money in the Permian, where it plans to run 6 to 7 drilling rigs this year, while only planning to use 2 to 3 rigs in the Bakken. 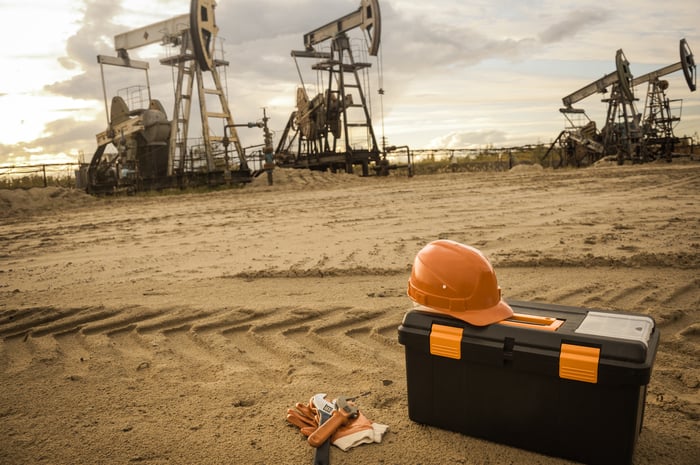 While this anticipated surge of oil output in early 2018 certainly helps reduce America's dependence on foreign oil, the global industry is on pace to once again produce more than the market needs. According to an estimate from the International Energy Agency, oil supplies will be 200,000 BPD above demand during the first half of this year, due entirely to that uptick in U.S. shale output. That excess oil will have nowhere to go other than storage tanks, which currently store a higher level of crude than the five-year average. That anticipated increase in the oil storage level could weigh on oil prices in the coming months, especially if shale drillers decide to ramp spending, which would unleash another gusher of crude later in the year.

To this point, drillers haven't announced big spending increases for 2018 even though oil is much higher than anticipated. WPX Energy, for example, expects to spend $1.04 billion to $1.11 billion on drilling more wells this year, or about 10% more than in 2017, even though oil is up 18% in the past year. Meanwhile, Anadarko Petroleum (NYSE:APC) expects to spend about $4.4 billion this year, up from about $4.3 billion last year. What's worth noting about Anadarko's current plan is that it will produce about $1 billion in excess cash this year if oil averages $60 a barrel, and even more if the current price holds up. However, instead of reinvesting that money into more wells, Anadarko plans to use it to repurchase stock, retire debt, and eventually increase its dividend.

If other drillers follow that outline for their growing stream of excess cash flow, it will prevent too much oil from flooding the market later this year, likely keeping prices from falling. However, if drillers ramp up spending, those announcements alone could put pressure on crude.

Hold on; it could be a bumpy ride

Crude oil has been scorching hot over the past several months. However, it might hit a brick wall this spring as more shale wells come online and start flowing into storage tanks. That's why investors should continue avoiding oil stocks that need crude in the $60s to get back on their feet and instead focus their attention on those that would be just fine if it tumbled back toward $50 a barrel.