Shares of American Outdoor Brands Corporation (NASDAQ:SWBI) -- formerly known as Smith & Wesson -- dropped 39.1% in 2017, according to data from S&P Global Market Intelligence, as the firearms and outdoor sports company struggled to sell its wares absent the threat of gun regulation.

To be fair, American Outdoor Brands stock was up more than 15% through the first half of 2016 -- that is, at least until shares plummeted on the heels of its fiscal fourth-quarter report at the end of June. 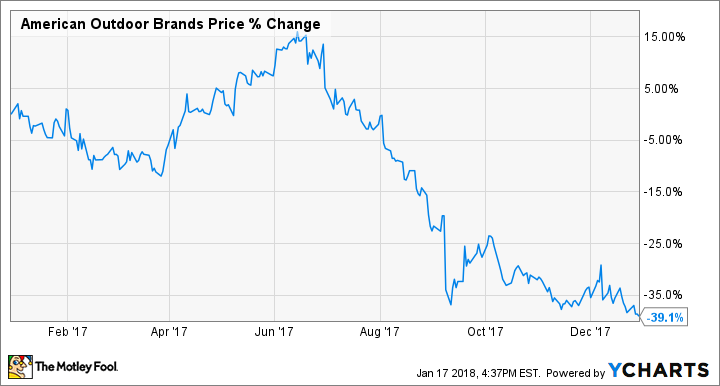 Even then, American Outdoor Brands'  June report appeared to hold good news at first. Quarterly revenue climbed a modest 3.6% year over year and translated to adjusted earnings of $0.57 per share -- well above Wall Street's expectations at the time. Investors were less impressed, however, by American Outdoor Brands' guidance, which called for full-year earnings to decline a whopping 44% at the midpoint of its range of $1.16 to $1.36.

Things went from bad to worse in August, when American Outdoor Brands continued to plunge following news that firearms purchases through the National Instant Criminal Background Check SYSTEM (NICS) had declined nearly 23% year over year in the month of July. Many industry watchers mused that with a largely gun-friendly presidential administration in place, on-the-fence buyers have had less of a sense of urgency to make their purchases in the near future.

Then in September, the company's downward momentum accelerated when it announced that revenue for its fiscal first quarter of 2018 had plunged almost 38%, translating to a narrow $0.02 per share adjusted profit.

Most recently in December, AOB announced yet another 36%+ quarterly revenue decline, again caused by a steep dip in firearms sales. Those results were technically near the high end of American Outdoor Brands' guidance at the time. But shares declined over 16% as the company provided terribly disappointing guidance for the current (fiscal third) quarter.

More specifically, American Outdoor Brands expects current-quarter revenue to arrive in the range of $170 million to $180 million, representing a 25% decline at the midpoint, which should translate to an adjusted net loss of $0.04 per share.

"[W]e believe promotions have, for the moment, replaced fair-based buying as a primary driver for consumer purchases," explained American Outdoor Brands CEO James Debney. "And the promotional environment for consumer firearms looks as though it will continue for the foreseeable future."

As it stands, American Outdoor Brands investors will receive their next update on its performance when the company releases fiscal third-quarter 2018 results in early March. But as long as this tough retail environment remains the new normal, expect shares to remain under pressure.