The market is a forward-looking machine, and this gunmaker's near future isn't pretty.

Despite a tough comparison to last year's pre-election boom in firearms sales, American Outdoor Brands (SWBI 1.38%) announced reasonably solid fiscal second-quarter 2018 results on Thursday after the market closed. But when the parent company of Smith & Wesson followed up with a massive reduction in its full-year earnings guidance, shares plunged more than 16% early Friday in response.

Let's dig deeper to see what American Outdoor brands achieved over the past few months, as well as what investors should expect from the firearms and outdoor-products specialist in the coming quarters. 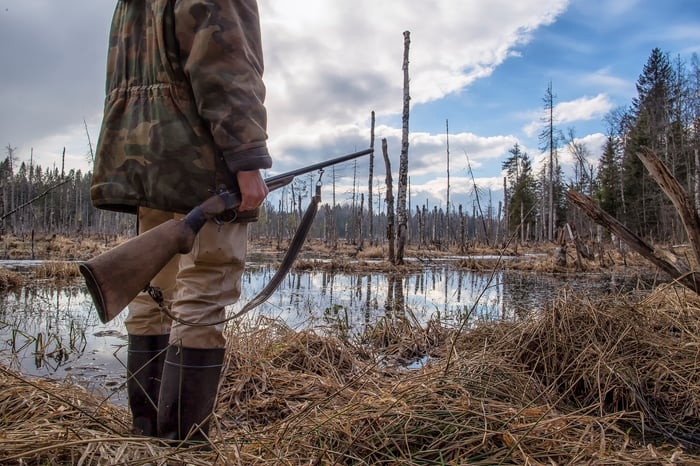 A challenging quarter for firearms

American Outdoor Brands' quarterly sales plunged 36.4% year over year to $148.4 million, as higher revenue from its outdoor products and accessories segment was more than offset by a steep drop in firearms orders from both wholesalers and retailers. To be fair, AOB's consolidated results arrived near the high end of the company's guidance, which was provided in early September and called for sales in the range of $140 million to $150 million.

Still the market leader -- but at a cost

During the subsequent conference call, CEO James Debney elaborated that NICS (National Instant Criminal Background Check System) checks for handguns fell 15.4% during the quarter, and the number of handguns shipped into the consumer channel plunged 50%. Nonetheless, American Outdoor Brands maintained its position as the market leader in both handguns and modern sporting rifles. Debney also stated that firearms orders were almost certainly hurt by "already heightened retailer inventory of multiple manufacturers' products, including ours."

Translation: American Outdoor brands isn't the only firearms manufacturer suffering -- and that's almost certainly why shares of competitor Sturm, Ruger (RGR -0.57%) are also down more than 7% as of this writing.

Meanwhile, American Outdoor Brands' gross margin plummeted to 34.2%, down sharply from 41.8% in the same year-ago period. According to Debney during the call, this was a consequence of "the highly promotional environment for firearms that has persisted for the last several quarters, and for longer than we originally anticipated."

Recall that three months ago, American Outdoor Brands suffered a similar post-earnings plunge after its firearm units shipped fell far below expectations, hurt by a wildly successful promotion earlier this year that the company believed pulled shipments forward into the previous quarter.

But the biggest concern for investors today is American Outdoor Brands' dismal forward guidance. For the current fiscal third quarter of 2018, the company expects revenue to arrive in the range of $170 million to $180 million, down roughly 25% year over year at the midpoint and far below the roughly $210 million investors were expecting. That should translate to an adjusted loss of $0.04 per share, as compared to consensus estimates for net income of $0.41 per share.

According to CFO Jeffrey Buchanan, these ranges assume a continued challenging environment for firearms, punctuated by more high promotional activity and excess inventories.

"[W]e believe promotions, have, for the moment, replaced fair-based buying as a primary driver for consumer purchases," Debney elaborated. "And the promotional environment for consumer firearms looks as though it will continue for the foreseeable future."

In the meantime, American Outdoor Brands will focus on items within its control, including optimizing manufacturing resources, reducing costs, and capturing synergies from recent acquisitions. It will also revisit its spending with a renewed focus on cash generation and investing in organic growth. And finally, American Outdoor Brands will continue establishing its new distribution center, consolidating its warehouse footprint to leave the company better positioned to serve its customers over the long term.

For now, however, there was nothing to like about that painful near-term outlook and massive full-year guidance reduction. And it's no surprise to see American Outdoor Brands stock plunging today.