Shares of Ford Motor Company (F -2.72%) closed down 7% on Wednesday, after the company announced preliminary 2017 earnings that fell short of Wall Street's expectations and gave pessimistic guidance for 2018. 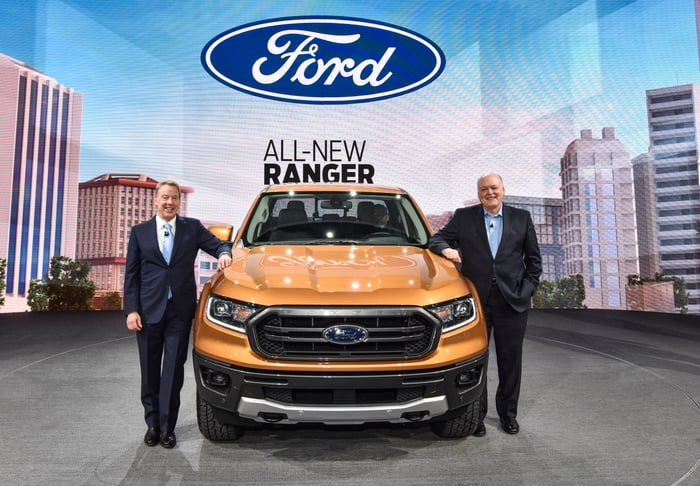 Ford executives told analysts at an investor conference in Detroit on Tuesday evening that the company's adjusted 2017 earnings will come in at $1.78 per share. Analysts polled by Thomson Reuters had expected earnings of $1.83 per share, on average.

Ford also said that it expects its adjusted 2018 earnings to be even lower than its disappointing 2017 result, falling between $1.45 and $1.70 per share.

There was one bit of good news for Ford shareholders: The company declared a $500 million supplemental dividend, or $0.13 per share, to be paid in the first quarter.

Ford will report its fourth-quarter and full-year 2017 results on Wednesday, Jan. 24.

Ford's earnings miss and downbeat guidance were a sharp contrast to the guidance provided by rival General Motors (GM -1.99%) earlier in the day. GM said that its 2017 pre-tax profit will be a record, falling at the "high end" of the guidance range it gave a year ago, $6.00 to $6.50 per share, and that it expects 2018's result to be similar.

It's worth noting that a year ago, Ford gave pessimistic guidance that stood in sharp contrast to GM's upbeat outlook -- and that both companies largely delivered on their guidance.

Ford's story doesn't look likely to improve anytime soon. CFO Bob Shanks told the analysts that higher costs for raw materials and currency volatility will cost the company about $1.6 billion this year. A cost-cutting effort is under way, but Shanks said that likely won't have a major impact on Ford's bottom line until 2020.

It leaves Ford investors wondering: When will the Blue Oval return to a profit-growth path?