It's little secret that chip giant Intel (NASDAQ:INTC) recently underwent something of a restructuring that involved significant headcount reductions. One of the areas that seemed to get hit the hardest by these cost-cutting measures was the company's Client Computing Group (CCG), which primarily sells processors and related components into the personal computer market.

Nevertheless, Intel needs to continue to invest appropriately in this segment simply because it wouldn't be smart for the company to exacerbate tough overall market conditions by losing significant market segment share or failing to bring innovations to market that could help keep overall PC sales stable. 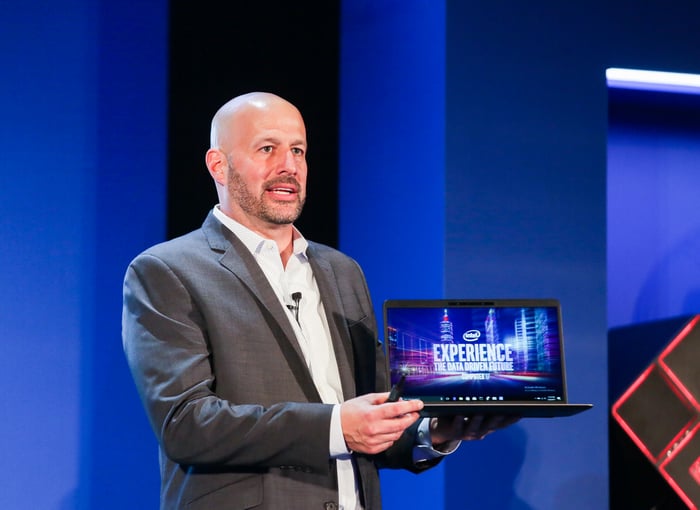 Bryant hasn't been the general manager of Intel's CCG for very long; he took the post in May 2017 after his predecessor, Navin Shenoy, took the reins of Intel's Data Center Group (DCG) following the sudden departure of the previous DCG chief.

Bryant said during the investor conference that, even within a reduced total budget for CCG after the cost-cutting measures, Intel has "dramatically increased" the company's investments in developing processor technology and boosted spending to ensure that the company can continue to release new PC processor products at a dependable annual clip.

Although Bryant certainly deserves praise for increasing those investments (it's clearly the right thing to do as more competitive products mean higher average selling prices and better margins), it's quite breathtaking that Intel needed to increase those investments at all.

Put another way, it sounds as though Intel's CCG had been under-spending on its core processor technologies under the previous general manager.

How does that happen?

Given Intel's enormous budget, how could previous management have allowed such an important business unit to be so under-funded that when a new general manager came in, he, in his own words, "dramatically increased" investments in the areas that mattered most?

Ultimately, I think Intel got distracted. The company doesn't seem to have been as focused on its core business as it ought to have been. Instead of chasing drones, mixed-reality headsets, and other fads that ultimately amounted to nothing (at least for Intel), Intel should have been hard at work making sure that its core competencies (processors and related technologies) and its core businesses (including CCG) were appropriately funded.

Even if we believe that Bryant has stepped up spending in his wheelhouse to the right level, how can investors be sure that the folks running the rest of Intel's businesses are investing appropriately? After all, the individual who  apparently didn't fund CCG well enough is now running DCG.

What other mistakes are shareholders going to learn about only after Intel decides to try to course-correct?