Even though the economy has improved, many Americans still have very tenuous finances. In fact, even though unemployment has hovered around historic lows and the stock market has reached record highs, over 6 in 10 Americans don't have the money to pay for an unexpected $1,000 expense. 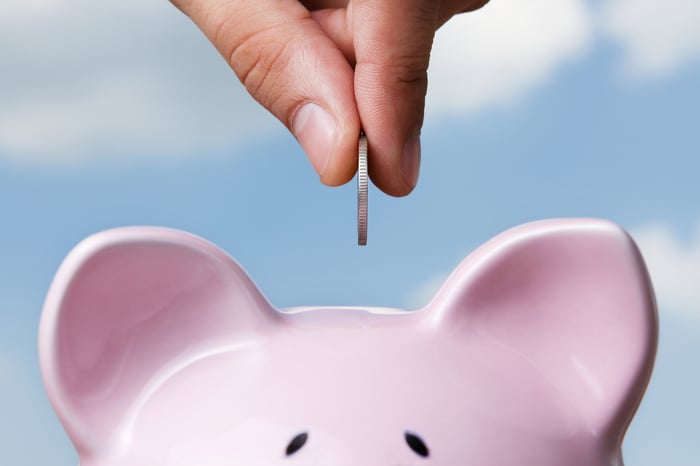 Saving even a small amount each paycheck can add up. Image source: Getty Images.

This could happen to you

This report does not cover scenarios that are unlikely to happen. Over the past year, according to Bankrate, over one-third (34%) of American households have had a major unexpected expense. Half of the time that expense topped $2,500 and more than half that hit that threshold (30%) had an unexpected expense that was over $5,000.

"Unplanned expenses can pop up at any time and your best protection is having an emergency savings cushion," said Bankrate.com Chief Financial Analyst Greg McBride in a press release. "Not only are returns on savings accounts rising, but it acts as a buffer from high-cost credit card debt or other borrowing."

Of the 36% of Americans who would need to borrow money to cover an unexpected $1,000 expense, about half would put it on a credit card. The next highest group, about one-third, would borrow from family or friends, and most of the remaining people would take out a personal loan.

Who has the money?

As income rises so too does the likelihood that you will have enough money to cover this type of expense. In addition, as income decreases, the likelihood that a person who can't cover the bill will need to borrow from family or friends goes up. Bankrate laid out the numbers starkly:

Among households with annual income of $75,000 or more, 62% would use savings and just 3% would borrow from family or friends. The lowest income households (annual income under $30K) were twice as likely to borrow in some way -- via a credit card, personal loan, or from family and friends -- as they were to use savings.

The good news, if any can be taken from this report, is that people who are doing better financially are making an effort to save. That suggests that the problem for lower-income households isn't that they don't know they should save, it's that they simply don't make enough to cover daily needs and plan for a rainy day.

Do what you can

Unless you have very sympathetic relatives willing to loan you money interest-free, one unexpected expense can set off a negative financial tidal wave. Borrowing on a credit card and paying it off over time comes with high costs and that just makes a bad situation worse (while creating further exposure should something else go wrong).

The best practice here is, no matter how little you make, to have an emergency fund. A good way to do this is having a small piece of your paycheck deposited into an emergency account. By never having the money in your hand, you won't factor it into your budget, and even $10 a week is $520 at the end of a year.

Taking small steps is better than taking none and hoping that everything works out. Even a small emergency fund can make a big difference when disaster strikes and the sooner you start preparing, the sooner you will become one of the group with enough savings to handle an emergency.

Only 39% of Americans Are Ready for a $1,000 Unexpected Expense @themotleyfool #stocks Next Article
Current