For the second time in as many weeks, CarMax (NYSE:KMX) stock has won an upgrade on Wall Street. Last week, analysts at Berenberg upgraded shares of CarMax to buy with an $83 price target, implying 18% upside to today's share price. And now, we learn from our friends at StreetInsider.com (requires subscription) that Oppenheimer & Co. has followed suit, announcing an upgrade of its own to outperform, and an even bigger price target -- $88 per share.

If Oppenheimer is right, CarMax stock now has the potential to return 25% profits over the next 12 to 18 months to investors who buy today. But is Oppenheimer right? Here are three things you need to know. 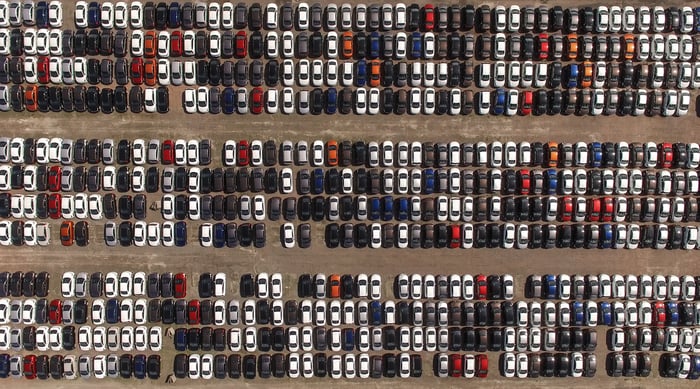 Let's start out with a quick review of where CarMax is right now. In December, CarMax reported fiscal Q3 2017 earnings featuring an 11% rise in revenue to $4.1 billion, but only a 9% expansion in profits, which came in at $149 million.

Unit sales of vehicles to consumers grew only 8% year over year, and same-store unit sales increased less than 3%, prompting investors to worry that CarMax's traffic wasn't growing as fast as many would like. (The reason sales grew faster than unit sales was that CarMax was able to sell its used cars for higher prices, helping to push up the dollar value of sales.)

Last week, Berenberg described how this deceleration in sales growth prompted a "derat[ing]" of CarMax stock on Wall Street. It also helps to explain why the stock has grown only 6% in value over the past year, while the rest of Wall Street is up 23% on average. Yet Berenberg argues that CarMax "will deliver double-digit earnings growth through the mid-term" as investors shift their focus from investing in companies that make new cars and toward companies selling used cars. Meanwhile, within the used car world, the analyst argues that CarMax "has the tools to effectively compete with new entrants," implying the company should be able to continue grabbing a disproportionate share of used car sales growth.

Oppenheimer shares that view. In today's write-up, the banker touts CarMax's "unique ... business model" of operating a nationwide chain of used car superstores as "one of the most compelling in Hardlines Retail." Demand for used cars remains "compelling," says Oppenheimer, and the fact that CarMax shares have underperformed the broader market lately -- falling as much as 16% from their November high to nearly $64 by late December -- has the analyst feeling optimistic that CarMax stock now presents an opportunity for investors to buy in on the cheap.

Adding to the attraction, says Oppenheimer, is the fact that as a domestic-focused car seller, CarMax should enjoy the full benefit of recently enacted corporate tax reform. How big a benefit? Well, CarMax's taxes amounted to roughly 36.6% over the past 12 reported months. A reduction in that tax rate to the new 21% bracket could drop as much as $170 million in extra cash to CarMax's bottom line assuming even just similar levels of sales and profit margins going forward (let alone the sales growth both analysts are predicting).

Added to the $695 million that CarMax earned over the past 12 months, for example, a $170 million boost to profits could drive a 24% one-time increase in CarMax's reported profits. If it comes to pass, that hypothetical $865 million annual profit would mean that CarMax stock, currently valued at $12.6 billion, would cost 14.6 times earnings. This would seem to be an attractive valuation relative to S&P Global Market Intelligence's projected 14.6% annual growth rate for CarMax -- certainly more attractive than the 18.1 trailing P/E ratio that CarMax stock carries today.

I've avoided investing in CarMax for years, based primarily on the stock's lack of free cash flow (traditionally measured as cash from operations minus capital expenditures). I admit that, with CarMax continuing to show negative cash from operations, significant capital expenditures, and as a result negative free cash flow today -- alongside a growing debt load -- I'm still hesitant to recommend the stock myself.

That being said, the fact that CarMax's business depends on extending auto loans and then securitizing them (CarMax is the eighth-biggest issuer of used car loans in the U.S.) makes its business model in some respects more resemble a bank than a retailer -- and as we know, free cash flow isn't really a useful metric when valuing banks. If you choose to value CarMax on a price-to-earnings basis instead (as may be more appropriate), the chance to buy a 14.6% grower at 14.6 times earnings could prove to be an attractive one in today's largely overvalued market.

While I still can't recommend CarMax stock myself, I get why Berenberg and Oppenheimer have chosen to do so.