In recent years there have been only two types of shipping stocks: the haves and have-nots. It really might be that simple.

Consider the tale of two stock charts: Textainer Group Holdings (NYSE:TGH) and Frontline (NYSE:FRO). The former, the world's second largest shipping-container owner, saw its shares gain an impressive 188% in 2017. The latter, one of the largest tanker companies in the world, delivered a 35% drop to shareholders.

Of course, there's another way to look at the recent fortunes of the two companies. Maybe the potential for future returns has been largely eroded for Textainer stock, while the awful performance of Frontline shares could set it up for an incredible rebound. Does that mindset bear out? Which is the better shipping stock? 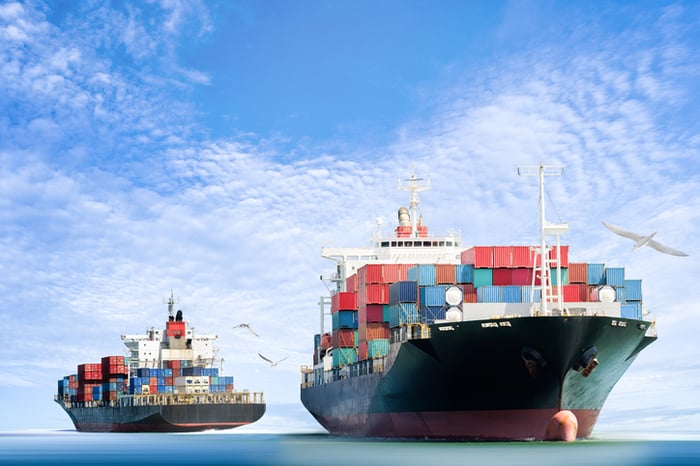 There was a stampede toward Textainer stock in 2017 -- and why not? Lease rates for shipping containers are near multi-year highs and heading higher. The culprit: new paint regulations in China are causing delays in the construction of new containers and constricting supply that was already limited from asset retirements.

That's been fantastic news for Textainer and its shareholders. Thanks to incredible timing with the company's fleet management activities, leases signed during the down cycle years ago are just beginning to expire now. That means the company can release existing containers at substantially higher prices for years to come to deliver tens of millions of dollars in incremental revenue gains without doing anything differently. Throw in a steady inflow of new container purchases, and business could be pretty sweet in the years ahead. Indeed, the stock trades at less than 20 times future earnings.

Unfortunately for Frontline, the amazing rise in fortunes for shipping-container fleet managers has not been driven by forces that will have any impact on the tanker industry. That's because the global fleet of tankers continued to grow in 2017, increasing competition in a weak market and driving down daily shipping rates to one-third of their historical averages.

But maybe the stock's misery presents a buying opportunity. How does it stack up to Textainer on paper?

The head-to-head valuation matchup starts off with a dud for Frontline, with Wall Street analysts not expecting profits to accumulate in the next 12 months. That's a red flag for investors hoping for a rebound in 2018.

When it comes to price-to-sales and price-to-book ratios, Textainer is twice as expensive as Frontline. This should be expected, of course, as investors have happily bought shares of the container leader and run away from the tanker stock. Security comes at a premium.

Even if the current metrics don't fall favorably for Frontline, can it turn things around in 2018? Investors may not want to hold their breaths, as it's possible global shipping rates are still searching for a bottom.

Case in point: Fellow shipper Nordic American Tankers threw a bucket of water on any investor who dared to adopt an optimistic outlook for the year ahead. In a recent operational update, the company noted 56 new vessels entered the global fleet in 2017. That was a multi-year high. And although the number of newbuilds is expected to fall to 33 in 2018, that's still more than the market needs. The industry may not see any relief until 2019, when only seven vessels are expected to be delivered.

Which is the better stock?

I don't think there's much doubt that Textainer is the better stock right now. It's poised for years of growth, given current favorable operating conditions and making difficult decisions to clean up its balance sheet with one-time charges in 2015 and 2016. Now, it seems ready to roll.

Frontline stock could be poised for an epic rebound -- eventually. It just seems increasingly unlikely for that rebound to begin in 2018, which means it's better for investors to continue waiting for more concrete signs that the industry is improving its health. Given the recent and upcoming rate of tanker additions to the global fleet, the wait could be longer than expected.