Shareholders who were hoping for a stellar 2017 at Axon Enterprise (NASDAQ:AXON) -- better known by its former name, TASER International -- were in for a big disappointment last April. The company announced that to spur growth in its fledgling body camera business, it would be giving away the cameras and a year's subscription to the Evidence.com platform for free.

This was a shrewd move for the long-run. But giving away some of your fastest growing products for free can have a huge effect on the bottom line: the company went free cash flow negative, and the stock underperformed the Nasdaq Composite by 19 percentage points.

But 2018 could prove to be a very different year. Here's what to look for, and why I personally think that 2018 might not be the company's most profitable -- but could be its most important.

Why Evidence.com is so important

Axon already has a very stable weapons business. Its TASER stun guns have a virtual monopoly in police forces across the United States. Last quarter, the division provided 59% of all sales, and 72% of gross profit.

But it is the Axon unit that has gotten all of the attention. While the body cameras that Axon gives away don't have a sustainable advantage over the competition, the Evidence.com platform that the company offers does. It introduces the protection of both high switching-costs and network effects.

Let's tackle both of those, starting with high switching-costs. Imagine that you run a police department, and you have virtually all of your footage on a single platform (Evidence.com). If you knew that transferring all of that data to another provider would (1) incur huge financial costs, (2) threaten the integrity of the footage that you had, and (3) involve retraining your entire staff on a new platform, what are the chances you would make such a move?

This helps explain why Axon was so willing to give away its body cameras and subscriptions to Evidence.com for free: once police departments are in the ecosystem, they're likely locked in for the long-haul. One look at Evidence.com seats booked shows that the platform is catching on, and at a growth rate of 102% per year! 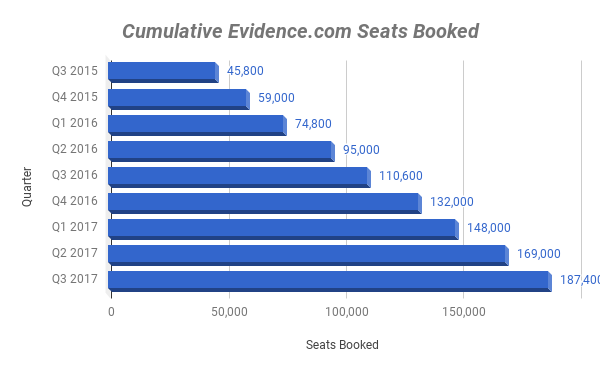 While we don't know exactly how many of the seats booked over the last quarter were due to the giveaway, we do know that those who took Axon up on their offer will start paying the full price for the subscription in 2018. That's one reason that I'm optimistic about the year ahead.

It should be noted, though, that subscription revenue is generally realized over the life of the subscription. So earnings might not grow nearly as fast as cash flow -- and management forecasts may play a more important role in the stock's direction in the year ahead.

Cutting down on paperwork

But there's an event on the horizon that I consider to be just as -- if not more -- important for shareholders. Using its new AI initiatives, Axon will be offering a Records Management System (RMS) in 2018. In the end, the system aims to reduce police paperwork by a whopping 80%, allowing officers to engage with the community instead of filling out tedious forms during their working hours.

They say a picture is worth 1,000 words. Here's how Axon sees RMS helping.

This would obviously be a win-win-win for Axon, its customers (police departments), and the community at large. It is also where those aforementioned network effects come in. Because RMS will be aided by artificial intelligence, the more data the company's algorithms can analyze, the better the results. As more departments sign on to Evidence.com, the utility of RMS should -- hypothetically, at least -- increase.

It's easy to imagine a future where departments start sharing data they've collected with one another, something that will only be possible if both are using Evidence.com. Allow that idea to play out over time and you can see why investors should be excited about the growth of the platform's network effects.

This investor's approach to 2018

I don't expect 2018 to be Axon's most profitable. The company is aggressively investing in its future. Management offered up this timeline for the profitability of its various segments.

The stock's performance over the year will have more to do with management forecasts and investor patience than anything else.

That being said, I'm excited to see what the year holds, and have no plan to sell my own shares, which account for 3% of my real-life holdings.