Duluth Holdings (NASDAQ:DLTH), which sells workwear and casual clothing under the Duluth Trading brand name, hasn't gotten much respect lately. Over the past several years, sales have soared, largely owing to the company's aggressive retail expansion efforts. The company's stock price, however, has been stuck in reverse, with shares falling roughly 30% over the past 12 months, as the market seems to doubt Duluth's ability to succeed where many other brick-and-mortar apparel retailers have struggled. 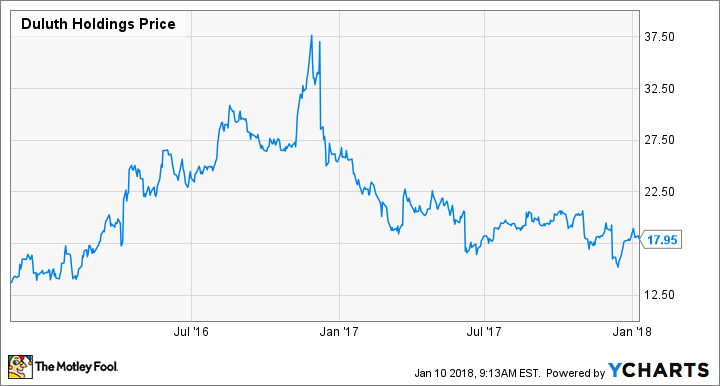 As Duluth continues to transition from a mostly online retailer to a multichannel model where growth comes primarily from its physical stores, these three metrics can help you gauge the company's progress.

In its earnings reports, Duluth lists total sales, while breaking out separate sales figures for its direct (online) and retail (brick-and-mortar) segments. Since the company's retail efforts are still in their infancy, its direct sales currently make up the lion's share (roughly 65%) of the total. However, retail sales are growing much more quickly, and are now responsible for driving the majority of Duluth's top-line growth. 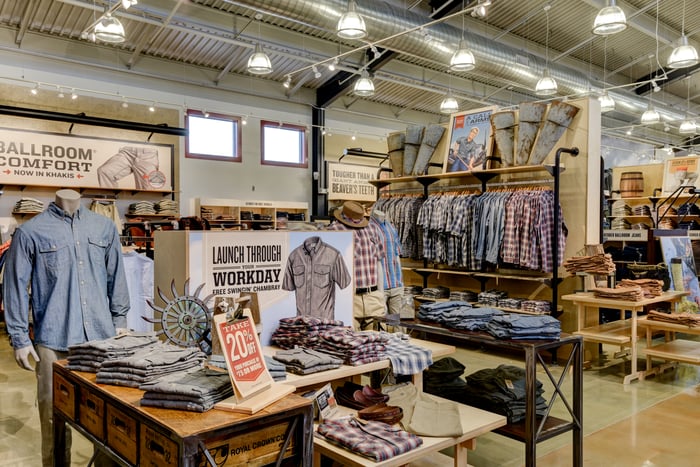 Duluth is making substantial investments to drive continued retail growth, including advertising to build brand awareness and broadening its assortment of women's clothing. However, the biggest sales driver remains the continued opening of new stores (more on that later).

If recent trends hold, it shouldn't be long before retail sales surpass the company's direct sales. By my math, that inflection point (on a single-quarter basis) will probably happen roughly a year from now. Given that retail sales accounted for a mere 6.2% of total sales back in 2013, that would be a remarkable milestone.

Duluth's products are designed to solve genuine problems for consumers -- and are marketed as being better-fitting, warmer, more durable, etc. This means they also tend to carry premium price tags.

One metric that demonstrates how effectively Duluth is promoting the full value of its products is gross margin, which measures Duluth's gross profit divided by total revenue, and reflects combined results for the retail and direct segments.

Though the company's gross margin has been under pressure from rising consumer expectations for free shipping, Duluth has been able to keep margins relatively consistent over the past few years, as the company's products have largely maintained their pricing power. Product margins were actually up year over year in the most recent quarter.

In a world of deep discounting with no shortage of e-commerce apparel choices, this stable trend in gross margin is a solid indicator that Duluth's merchandise remains differentiated in the minds of consumers and that they're willing to pay up for it rather than settle for another brand.

Store count and pace of expansion

Duluth's substantial investment in its retail store growth reflects the company's belief in its long-term national potential. Having identified 100 suitable locations, Duluth is still in the early stages of building out what it eventually hopes will be a bricks-and-mortar presence coast to coast. As you can see, the company has significantly accelerated its pace of new store builds since 2015.

Duluth ended calendar year 2017 with 31 stores, which represents an amazing annual growth rate of 93.8%. And the company is aiming for another 15 new stores in 2018, which would represent just under 50% annual growth.

As the company keeps scaling up, that growth rate will naturally decline, but investors will want to see Duluth stay aggressive with its expansion in the years ahead, and will look at how quickly the company can realistically achieve its stated objective of 100 stores. If the company were to continue at a pace of 15 new stores annually, it would reach 100 stores sometime during 2022. But given Duluth's recent history of increasing its guidance for new stores during the year, I'm guessing that happens even sooner.

Though its stock price doesn't currently reflect it, by most measures, Duluth's business appears to be doing just fine. As long as Duluth keeps generating robust retail sales growth, maintaining solid gross margins, and increasing its store base at impressive rates, the company's future should be bright.