Last year was underwhelming for the U.S. box office. Ticket sales and revenue fell, and movie theaters felt the pinch. The problem: changes in consumer trends, with more families choosing stay-at-home entertainment. Conversely, movie and entertainment studios have fared well in spite of the changes. Investors should adjust their strategy accordingly.

Why there are fewer trips to the theater

Trips to the movies are turning into a special event. Barring a hyped big-budget production, families are choosing to stay at home. Reasons include higher ticket and concession prices, plenty of TV and online-streaming options, and the constantly improving quality of at-home TV's.

Movie theaters have tried to lure patrons back with new options like 3D and high definition, better seating, and expanded concession choices that in some cases are beginning to rival restaurants. Results have been mixed, though.

Ticket sales have been stagnant at best, and raising prices has had limited effect on increasing box office revenue. As of late, the theater business' response has been to consolidate. Big mergers and acquisitions have been made, including several by the world's largest chain, AMC Entertainment (NYSE:AMC), and Regal Cinemas (NYSE: RGC) agreeing to be acquired by U.K.-based Cineworld Group. That, too, has yet to pay off, as 2017 was a painful year for theater owners. 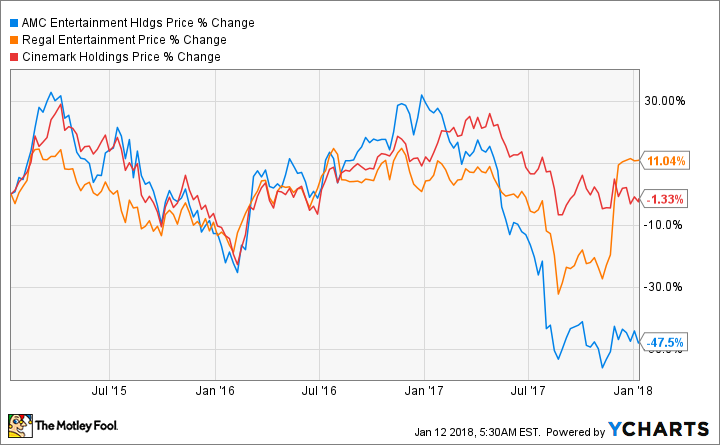 Movie studios, on the other hand, are doing well in spite of shrinking audiences. The industry has found a formula that works: focusing on big-budget productions, many of them sequels, trilogies, or part of a larger "cinematic universe," like Disney's (NYSE:DIS) Marvel superhero movies and Star Wars franchise, or Lions Gate's (NYSE:LGF-A)(NYSE:LGF-B) Hunger Games trilogy. The result has been fewer original movie ideas, but a more-predictable generation of blockbuster hits and ticket sales.

And while online movie streaming has been a headwind for theaters, studios can still make money through distribution revenues. Some studios have even created their own streaming options to rival Netflix (NASDAQ:NFLX) -- like Hulu, jointly owned by Disney, Comcast (NASDAQ:CMCSA), and Twenty-First Century Fox (NASDAQ:FOXA). Others have made their traditional cable TV subscription services available for online streaming, like Lions Gate's Starz channel.

Vertical integration has provided a further boost. The movie production capabilities of companies like Disney and Comcast have been leveraged into related businesses like theme parks and merchandising. All of this has resulted in very different shareholder returns when compared to those of movie theaters. 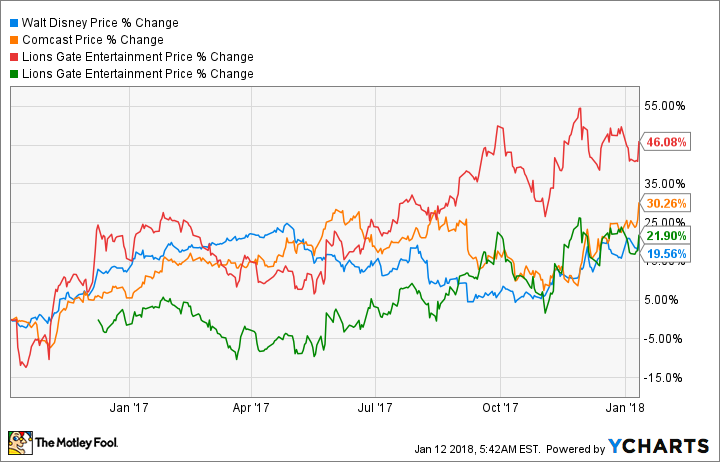 The theater business has been struggling to gain traction for quite a while. In the meantime, movie and entertainment stocks have continued to provide healthy returns for their shareholders. With their ability to better navigate changes in consumer preferences, studios look like the better blockbuster buy than theaters.