Choosing between investing in GlaxoSmithKline (NYSE:GSK) and Eli Lilly (NYSE:LLY) has been pretty much a no-brainer over the past few years. Lilly has trounced Glaxo in stock performance for the most part.

But looking only at the past isn't a smart move when trying to pick between GlaxoSmithKline and Lilly now. It's much more important to evaluate how each company is positioned for the future. Which drugmaker has the better prospects for the coming years? Here's how Glaxo and Lilly compare. 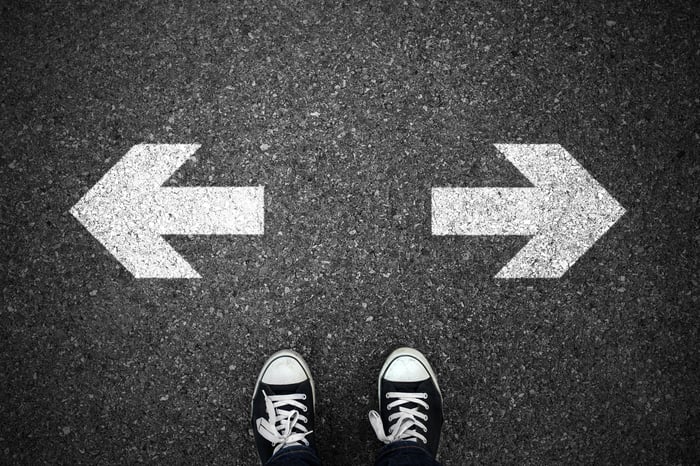 Before we get to GlaxoSmithKline's positives, let's look at the challenges facing the company. The biggest issue is that sales are falling for Glaxo's current top-selling product, Seretide/Advair, and that's not likely to change. Older drugs that have lost patent exclusivity, including Avodart and Seroxat/Paxil, are losing steam as well. Glaxo is also spending considerably more funding its dividend program than it's earning, spurring questions as to whether a dividend cut could be on the way.

On the other hand, the drugmaker has a solid lineup of newer products that are rising stars. Glaxo's newer respiratory drugs, including Anoro Ellipta, Relvar/Breo Ellipta, and Nucala, are enjoying strong sales growth. Momentum for these and other new drugs has been more than enough to offset sales declines for Seretide/Advair.

The drugmaker also has won a nice chunk of the market share in treating HIV. Sales for blockbuster HIV drugs Tivicay and Triumeq continue to grow rapidly. Several of Glaxo's vaccines are performing well, too, especially meningitis B vaccine Bexsero. Market research firm EvaluatePharma projects that sales for Bexsero will double by 2022 to around $1.17 billion.

Glaxo could soon add another blockbuster to its ranks. The FDA approved shingles vaccine Shingrix in October 2017. Shingrix demonstrated greater than 90% efficacy across all age groups in late-stage studies. The vaccine should pass the $1 billion sales level within the next few years.

As for the company's dividend, the yield currently stands at a hefty 5.31%. And while Glaxo's payout ratio is certainly higher than you'd like, the drugmaker is still generating enough free cash flow to more than cover its dividend payments. With the prospects for stronger growth over the next several years than the company has had in recent years, Glaxo's dividend should be on firmer ground in the not-too-distant future. Even if the company does cut its dividend, the likelihood is that the yield would still be attractive.

What about Eli Lilly? The big pharma company does have its own set of challenges. Lilly's top-selling product, Humalog, has already lost patent exclusivity and will likely experience sales declines in the near future. Sales are already slipping for the company's No. 2 and No. 3 moneymakers, Cialis and Alimta. It's a similar story for Lilly's neuroscience drugs Cymbalta, Strattera, and Zyprexa.

However, investors can also find several things to like about Lilly. The company remains a leader in the diabetes market, with soaring sales for Trulicity and strong momentum for Forteo and Trajenta.

In addition, Lilly has claimed a spot in the lucrative but crowded autoimmune-disease market with Taltz. The drug, which won FDA approval in 2016 for treating plaque psoriasis and in late 2017 for treating psoriatic arthritis, ranks as Lilly's fastest-growing drug, with sales skyrocketing more than 580% year over year in the first three quarters of 2017.

Lilly CEO Dave Ricks stated at the recent J. P. Morgan Healthcare Conference that the company's "next chapter of growth" will be in treating pain. The drugmaker's pipeline includes three promising late-stage candidates targeting treatment of pain -- galcanezumab, lasmiditan, and tanezumab. Potential FDA approval for galcanezumab could come later this year, and Lilly hopes to submit lasmiditan for approval in 2018 as well.

There's also the dividend. Lilly's dividend currently yields 2.64%. The company has increased its dividend in each of the past four years. While Lilly's payout ratio of nearly 99% is high, the drugmaker's free cash flow should allow Lilly to keep the dividends flowing.

Which of these big pharma stocks is the better buy? My nod goes to Lilly. I agree with Dave Ricks' optimism about the company's migraine candidates.

That being said, both of these companies face significant challenges. Gilead Sciences' bictegravir/F/TAF combo, if approved as expected, could take market share from Glaxo's Tivicay. Lilly's Trulicity could run into stiff competition from Novo Nordisk's Ozempic. And, of course, both Glaxo and Lilly have declining sales for older products to deal with.

While Lilly is the better choice between these two stocks, I don't recommend either stock right now. There are simply too many superior investment alternatives that offer stronger growth prospects with less risk.