Restaurants have had a tough go of things over the past couple of years, as decreasing customer counts have caused comparable-restaurant sales (comps) to drop for several consecutive quarters.

After six full years of positive comps, Tex-Mex chain Chuy's Holdings (NASDAQ:CHUY) finally fell victim to the "restaurant recession" in late 2016 and hasn't recovered since. In fact, the company posted its worst comps performance as a public company in the most recent quarter.

So why do I think Chuy's has a good chance to break through to positive comps again when it reports its Q4 2017 earnings in February? Let's look at the evidence. 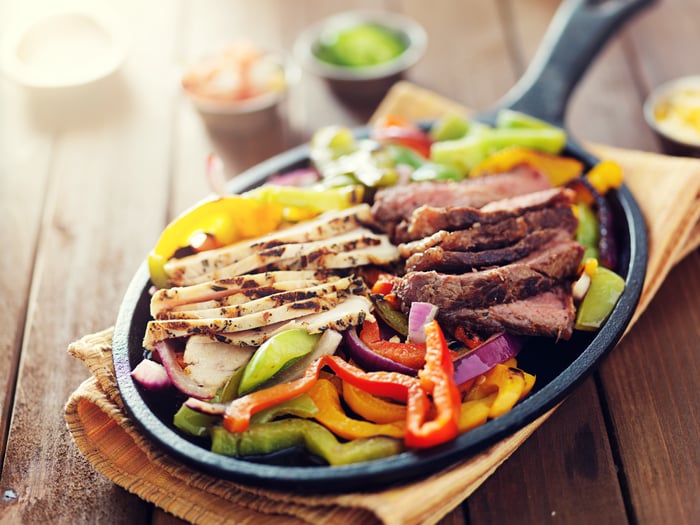 Chuy's history of outperforming the averages

In general, Chuy's has a solid history of beating industry comps.

As you can see from the table above, in four of the five most recently reported quarters, Chuy's results have come in ahead of the industry's. That held true even in the most recent quarter, when Chuy's -- with a concentration of restaurants in the Southeast and Texas -- suffered an extra hit due to hurricanes Harvey and Irma, which impacted a whopping 36% of its locations. Management estimates its comps would have been 0.9 percentage points higher if not for the storms.

The second reason for optimism is that, according to data from TDN2K'S Black Box Intelligence, the industry saw its first quarter of positive sales growth in two years during Q4 2017, with same-store sales rising roughly 0.4%. Assuming Chuy's is able to best the industry averages again, this seems to point the way toward a big comps recovery in Q4.

Looking specifically at customer counts over the past several quarters, we can see that Chuy's traffic numbers -- even though they're declining -- have also consistently fared better than the industry's.

And while industry traffic fell again year-over-year in Q4, the rate of decline showed a big sequential improvement. Whether this is a fundamental shift or just a blip remains to be seen, but I'd expect Chuy's traffic numbers to once again come in above the industry's when it reports.

There's one more important reason why Chuy's looks likely to return to comps growth next quarter: The company's management has all but told us so.

On Chuy's last conference call, the company said it had witnessed a substantial comps improvement during the month of October, noting that Q4 comps to date were "slightly positive."

And at a conference appearance on Jan. 8, CEO Steve Hislop stated that right around the time kids headed back to school, the company began seeing an uptick in traffic, which continued throughout the fourth quarter. In addition, Hislop used the word "pleased" on three separate occasions to describe the company's take on its Q4 results.

That may be parsing a couple of comments a little too finely, but it seems fairly obvious that Chuy's is signaling a significant improvement during Q4. Combined with industry data that backs up that assertion, I won't be at all surprised if Chuy's manages to return to comps growth when it reports earnings next month. For investors who've been sweating out the last several quarters of negative comps, falling margins and reduced store growth ambitions, that would be a huge relief.