The word "robot," or some form of it, was mentioned 13 times on Tesla's (NASDAQ:TSLA) third-quarter earnings call in November, versus just four times on the previous two calls combined. This stat reflects how critical advanced factory automation has become to the electric car specialist's success -- or even survival.

Until last summer, Tesla had only produced high-end vehicles in relatively low quantities. Now it's in the early stages of manufacturing its first mass-market car, the Model 3, and has significantly higher production aims. Less pricey cars carry lower profit margins than luxury ones, making the efficiency of their production more crucial. That's why Tesla loaded up on robots before starting to make the Model 3, with CEO Elon Musk saying on the most recent earnings call that the company continues to add robots to the production line,

Granted, there aren't many choices for industrial robot suppliers. However, since Musk is likely much more tech savvy than the typical CEO, it's worth noting that Tesla uses KUKA (OTC:KUKAF) and FANUC (OTC:FANUY) to supply its robots. The stocks of both companies are worth exploring for investors considering betting on the increasing automation of factories and warehouses. 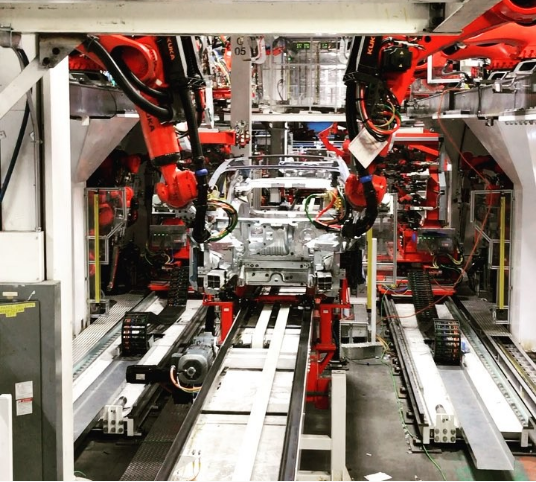 Here's an overview of the two companies and their stocks.

Data source: YCharts. *PEG is the price-to-earnings ratio divided by earnings per share (EPS) growth over the trailing-12-month (TTM) period. YOY = year over year. Data as of Jan. 19, 2018.

Germany-based KUKA, founded in 1898, is widely considered to be one of the world's top four makers of industrial robots and has locations around the world. (Japan's FANUC is the world's largest supplier of industrial robots, with Switzerland's ABB and Japan-based Yaskawa the other big players.) As of January 2017, KUKA is 94.5% owned by Chinese appliance maker Midea Group, which announced its acquisition plan the previous spring.

Midea is often referred to as "KUKA's owner" in the press, likely leading some investors to assume they can no longer buy KUKA stock. This isn't so, thanks to that approximately 5% of KUKA shares that still trade over the counter in the U.S. (Shares are thinly traded, which poses additional risk.) Reportedly, Midea has agreed that it won't call for a compulsory redemption of the remaining shares for at least the next 7 1/2 years. KUKA's ownership situation provides an opening for investors to potentially profit from the increased sales that should come its way from China, as the developing nation is a voracious growth engine. Indeed, when third-quarter earnings were announced in late October, KUKA CEO said that the company plans to double its production capacity in China by the end of the first quarter of 2018.

The challenge for Midea, however, is to increase KUKA's profitability. For the trailing-12-month period, KUKA's profit margin was 2.5%, whereas FANUC, Yaskawa, and ABB sported margins of 24.4%, 7.8%, and 6.6%, respectively. Moreover, its third-quarter earnings were disappointing, resulting in the stock sharply selling off after steeply climbing throughout 2017. German engineering is often considered second to none, with KUKA owning many "firsts" in industrial robotics. However, the cost of doing business in much of Western Europe is generally considered higher than in many other parts of the world.

FANUC was officially founded in 1972, though its roots date back to the mid-1950s. Like KUKA, it's a global company, a pure play on automation, and targets a wide range of industries, including aerospace, automotive, consumer goods, education, food, metal fabrication, medical, pharmaceutical, solar panel, and more.

FANUC's North American headquarters is located in the Detroit region, as the company does a lot of work for automakers -- as does KUKA. In November, FANUC announced that it had produced its 500,000th robot. To keep pace with the growing demand for automation, it plans to open a new factory in August 2018, which will hike its robot production capacity from 6,000 to 11,000 units per month.

For the first six months of its fiscal year ended in September 2017, revenue soared 35.2% to 346.7 billion yen and net income surged 42.5% to 85.8 billion yen. Net income increasing faster than revenue is just what investors like to see, as it indicates that profit margin is expanding. As previously mentioned, FANUC has a fat profit margin, which was 24.4% over the trailing-12-month period. Given its juicier margin and better recent earnings performance compared with KUKA, it's not surprising that FANUC stock is pricier on a PEG (price-to-earnings to earnings growth) basis, as noted in the above chart.

KUKA and FANUC are both worth further exploring as stocks that could benefit from the increasing automation of factories and warehouses. The industrial robot space expanded 18% in dollar value and 16% in number of units sold in 2016, according to the International Federation of Robotics (IFR), with the IFR forecasting an average of 15% annual growth in units through 2020.