Please ensure Javascript is enabled for purposes of website accessibility
Free Article Join Over 1 Million Premium Members And Get More In-Depth Stock Guidance and Research
By Asit Sharma - Jan 21, 2018 at 8:17AM

Coke introduces four new Diet Coke flavors, alongside a bright and modern packaging redesign. Is this a recipe for success?

The company reports that it spoke to more than 10,000 people across the U.S. for input and tested 30 flavor combinations over a two-year period, eventually settling on the five flavors that received the most favorable consumer responses, pictured below: 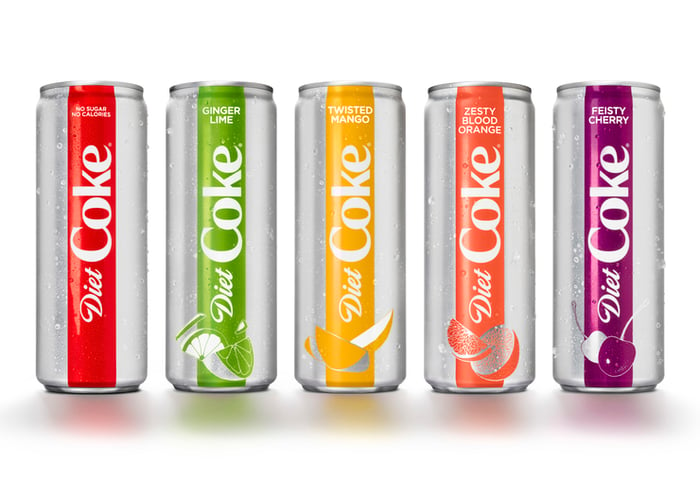 As you can see, the company has provided the brand with a refreshed contemporary design and sleek new 12-ounce can architecture. And it comes not a moment too soon. Consumption of carbonated soft drinks, and diet sodas in particular, been declining for years.

Last year, Beverage Digest reported that carbonated soft drink volumes fell in the U.S. in 2016, for the 12th consecutive year. Consumption of Diet Coke dropped 4.2%, although rival PepsiCo Inc.'s ( PEP 2.55% ) Diet Pepsi suffered an even steeper decline of 9.2%. Although industry statistics for 2017 won't be available until this spring, through nine months of 2017, Coca-Cola's own numbers show a 4% decline in Diet Coke's unit case volume in North America.

I've recently described both the strategic and financial tweaks Coca-Cola has implemented to revitalize its business against a backdrop of slumping soda sales. Regardless of new initiatives, brands like Diet Coke remain crucial to the company's success: Diet Coke still claims the title as the best-selling diet soft drink in the U.S. Thus, the company has much interest in revitalizing the brand, and at first blush, a revamp aimed at millennials makes perfect sense.

Though there seems to be a wrinkle in the logic.

The company hasn't reformulated Diet Coke, instead referring to this flavor extension a "brand restage." Diet Coke continues to be sweetened with aspartame and acesulfame potassium, as do the four new flavors. Aspartame has proven to be controversial over the years, and its presence is a primary reason sales of Diet Coke and rival Diet Pepsi have deteriorated in recent years.

Why wouldn't Coca-Cola take this opportunity in contemporizing its brand to reformulate Diet Coke with another sweetener, say plant-based, no-calorie stevia? Undoubtedly the organization is determined to avoid repeating PepsiCo's surprising experience with diet soda reformulation.

In 2015, PepsiCo replaced aspartame in Diet Pepsi with sucralose, after a similar two-year innovation cycle, which also included a massive polling of customers. Less than a year after the switch, amid loud consumer protests and a sudden plunge in sales of Diet Pepsi, the company made its original aspartame-sweetened version available again.

The lesson PepsiCo painfully absorbed is that a slightly older generation comprises the core customer base of diet sodas in the U.S., and significant ingredient changes pose considerable risk, if those customers pan the resulting taste.

So Coca-Cola perhaps prudently left its original Diet Coke formulation untouched, but since it's reaching out to millennials, that might be a mistake. Millennials tend to avoid artificial ingredients like aspartame in the first place and numerous studies have demonstrated that millennials place great emphasis on "clean label" formulations, that is, products that are associated with sustainability, and are free from artificial and harmful ingredients.

Thus, while Coca-Cola may induce a host of younger consumers to try its new Diet Coke flavors due to attractive packaging design elements and bold flavorings, they may avoid consuming the drinks on a regular basis, due to potential ingredient concerns. 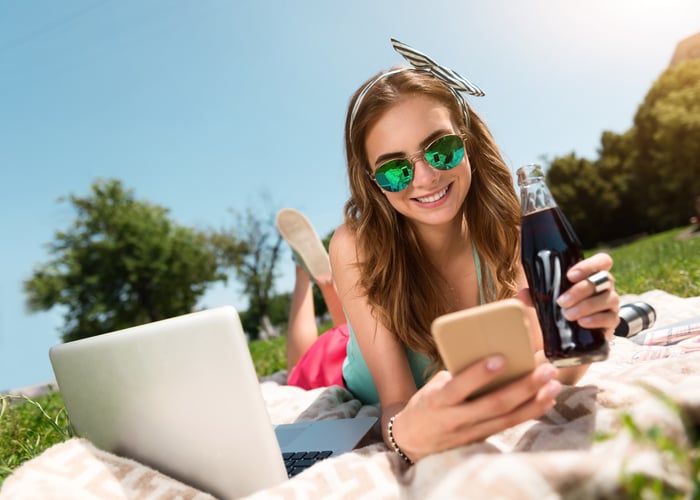 To put this another way, the new Diet Coke flavors probably aren't a millennial's idea of a diet soft drink; rather, they're an older generation's idea of what millennials must prize in a soft drink -- flashy packaging and vibrant flavors, without regard to the ingredient list.

But hope is not lost. Though it's been conceived for and pitched to a young demographic, the new Diet Coke lineup doesn't need to take off with this crowd to succeed. Coca-Cola simply needs Diet Coke volumes to stabilize as it continues to extend its noncarbonated portfolio. Flat volume over the next few years would count as a positive, thus helping to lift Coke's share price.

Where will this last bit of volume emerge from? A distinct consumer group exists that will likely delight in Diet Coke's new flavors and may purchase enough of the new product to help stem the volume bleed, should the company choose to fine tune its marketing. That's the core customer base composed of older generations, a cadre of loyalists Coca-Cola shouldn't soon forget about.