Most people think about the Federal Reserve in its role as the nation's central bank, helping to determine monetary policy and manage the U.S. economy by setting key interest rates. What most people don't know about the Fed is that it's a profitable institution, and most of the money that it generates goes back to the U.S. Treasury.

Earlier this month, the central bank said that it would pay just over $80 billion of its net income to the federal government. That's actually down from what it has earned in recent years, having gotten close to the $100 billion mark in both 2014 and 2015. Over the past decade, the Fed has sent a whopping $768 billion to the Treasury. 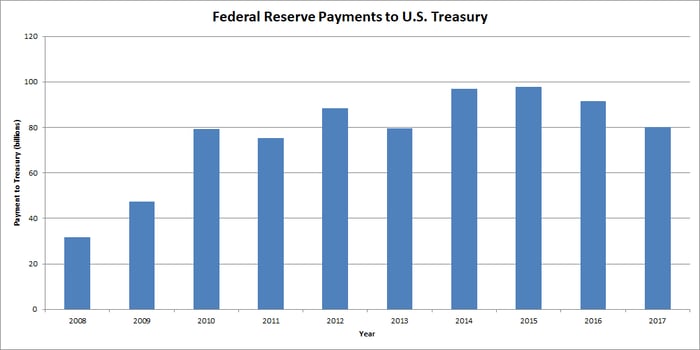 How does the Fed make so much money? Most of its income comes from the securities that it owns as part of open market operations to control interest rates. That activity has been higher in the past 10 years than it was previously in the Fed's history, because the central bank has taken a more active role in stimulating economic growth through monetary policy since the financial crisis and Great Recession in 2008.

Against that income, the Fed has to pay considerable amounts out as interest to the private banks that are required to hold reserve balances. Yet even with those outflows and the expenses of actually running the central bank, the Federal Reserve has proven to be a valuable asset not only in guiding the economic future of the nation but also generating some deficit-fighting cash along the way.