Last summer, General Electric (NYSE:GE) began a thorough review of its insurance obligations -- a legacy of its once-massive GE Capital business -- because of higher-than-expected claims on an old long-term-care reinsurance portfolio. Expecting a big charge, management stated that GE Capital would not pay any dividends to GE until the review was complete.

General Electric recently finished this review, and the results were worse than expected, leading to a $9.5 billion pre-tax charge. This outcome caused GE stock to plummet 13.3% last week, its worst weekly performance since the Great Recession. 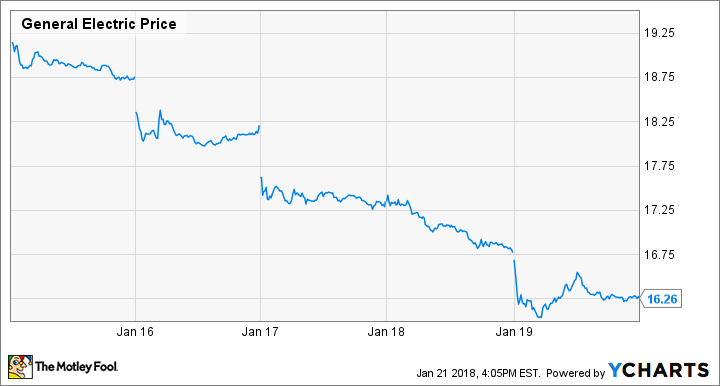 The massive decline in GE's stock price knocked more than $20 billion off its market cap. That seems like a clear overreaction on investors' part.

During the past few months, GE undertook a thorough analysis of its insurance liabilities to determine what it is likely to owe. It hired two independent actuarial consulting firms to work with the internal GE Capital team on the review.

Back in November, new CFO Jamie Miller told investors the company was likely to take an after-tax charge of more than $3 billion related to the insurance review. The actual after-tax charge was twice that size -- $6.2 billion -- under the 2017 tax system, and $7.5 billion including the impact of tax reform.

The cash impact of the insurance shortfall will be even larger. GE Capital will contribute a total of approximately $15 billion to its insurance reserves over the next seven years. Doing so will prevent GE Capital from paying any dividends to the parent company for at least a few years.

GE had telegraphed the fact that the insurance review would lead to a sizable special charge, but the ultimate size of that charge was significantly larger than analysts and investors had expected. Still, even looking at the cash cost of $15 billion -- which will be smaller net of taxes -- it doesn't really justify the extent of GE stock's recent decline.

However, the bad news on the insurance front brought out the GE bears in full force. Deutsche Bank analyst John Inch struck the most alarming tone, warning that General Electric faces a "cash crunch" and could be forced to cut its dividend again, raise equity, or both. Meanwhile, Cowen analyst Gautam Khanna repeated his contention that GE stock could be worth as little as $11 if the company were broken up -- one option management floated -- after accounting for its debt and pension liabilities.

Arguments like these appear to have accelerated GE stock's decline. However, neither one is very convincing. On the cash side, while GE Capital won't be paying dividends to the parent company for a while, CEO John Flannery has made cash production a key priority for General Electric's industrial businesses. Management expects industrial free cash flow, excluding pension contributions, to rise from around $3 billion in 2017 to $6 billion-$7 billion in 2018.

Cash flow should continue to rise in subsequent years. Furthermore, GE plans $20 billion of asset divestitures over the next two years. It could also sell off its stake in Baker Hughes, which is currently worth nearly $25 billion and could rise in value if oil prices remain elevated. This situation hardly sounds like a cash crunch.

The argument that GE stock would be worth even less in a breakup scenario because of debt and pension liabilities doesn't make much sense, either. While General Electric had $136.4 billion of debt at the end of the third quarter, $97.5 billion of that figure was GE Capital debt, which is fully offset by cash, investments, receivables, and other assets. Meanwhile, GE's $31 billion pension deficit is significant, but it will shrink significantly if long-term interest rates rise.

Nothing has changed, really

The bottom line is that very little has changed at General Electric. It would have made sense for GE stock to decline by a few percent, in light of the larger-than-expected insurance charge. But last week's tumble makes the stock look like even more of a bargain. Its market cap has fallen to just $141 billion, whereas GE's aviation business, which accounts for less than a quarter of the company's revenue, may be worth about $100 billion by itself.

There's no doubt that General Electric faces serious challenges right now. Market conditions for the power business may not improve anytime soon. GE Capital needs to rebuild its balance sheet. Several smaller units need to be sold or spun off.

That said, GE stock could move significantly higher over the next few years. Investors just need to be patient while management works through the process of simplifying General Electric's operations and cutting costs in the power business.