Novavax's stock is edging higher today on speculation that its experimental flu vaccine might trigger a buyout.

Shares of Novavax (NVAX 17.46%), a clinical-stage synthetic vaccine specialist, jumped by as much as 21% on heavy volume in early morning trading today. What's up? Novavax's shares appear to be responding positively to the news that the ongoing flu season has turned into one of the worst, and most deadly, in more than a decade.

As a reminder, Novavax is developing a novel flu vaccine called "NanoFlu" that's billed as potentially being more efficacious than the current market share leaders from Sanofi and GlaxoSmithKline. The company is hoping to leapfrog these titans of the industry by developing a nanoparticle-based seasonal influenza vaccine that can provide protection against a broader range of virus strains. 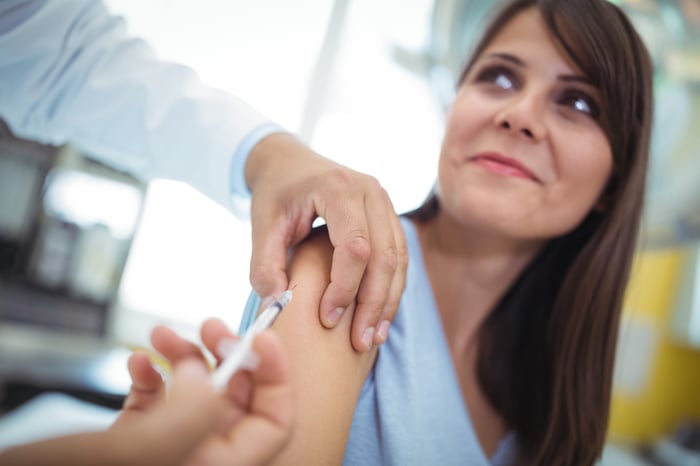 The current generation of flu vaccines is doing a poor job at controlling the ongoing epidemic that has now spread across the country. As a result, if Novavax's NanoFlu does turn out to be a major advancement in terms of efficacy, the company stands to possibly rake in billions in sales once it hits the market.

Novavax is on track to release new data from NanoFlu's early to mid-stage clinical program sometime in February. Although these data probably won't lead to an accelerated approval, it's no secret that both Sanofi and Glaxo are actively hunting for new sources of revenue to boost their long-term outlooks. In other words, a positive data readout for NanoFlu might transform Novavax into a hot buyout target next month.

That being said, Novavax has yet to prove that it's even capable of producing a safe and efficacious vaccine for any indication. The company's last major data readout for respiratory syncytial virus in older adults, after all, was a total flop. As such, investors might want to avoid getting sucked into this buyout talk for now, and instead, focus on the company's actual chances of success in the clinic.