The biggest story in the financial markets continues to be bitcoin. Although the cryptocurrency has started 2018 on an uncharacteristically bearish note, with the NYSE Bitcoin Index down about 18% so far this year, bitcoin has advanced a mind-boggling 1,300% on a one-year basis.

While bitcoin may be of the most interest to individual investors, blockchain, the technology behind the wildly popular cryptocurrency, is of key interest to companies. A report from CB Insights notes that more than 90 corporations participated in blockchain-related equity funding for a collective $327 million through October 2017.

If recent statements from Comcast (NASDAQ:CMCSA) are any indication, look for more blockchain-related investment in 2018. 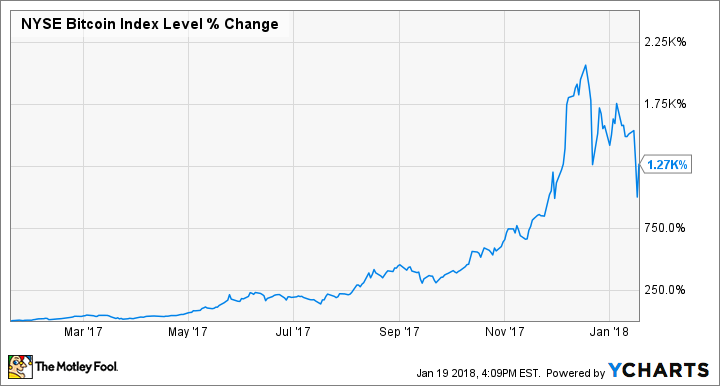 Full speed ahead for blockchain

According to technology-focused site TechCrunch, Gil Beyda, the managing director of Comcast's venture capital arm, Comcast Ventures, stated "In 2018, we're doubling down on blockchain." But Comcast's interest isn't driven by the price of the blockchain-powered cryptocurrency bitcoin. "Just to be clear, if bitcoin were at $15 instead of $15,000 we would still be committing to this," Beyda was quoted as saying.

Unlike Long Blockchain, the tea company that decided to upend its company profile by announcing its intentions to become a cryptocurrency miner, Comcast is wisely integrating blockchain technology into its existing operations to grow revenue and lower expenses.

Blockchain technology can perform a host of applications, many of which have direct benefits for Comcast. The first is on the expense side, as the decentralized ledger may eventually be used to record transactions from Comcast's 29.1 million customers in a more cost-efficient and secure manner. Additional applications for the company are digital-rights management enforcement and royalty tracking.

Currently, Comcast is in the nascent phases of using blockchain technology to better understand data. Comcast Ventures is running joint tests with The Walt Disney Company and Cox Communications to pool advertising information without sharing consumer-specific data. If Comcast can derive better, more holistic data on consumers by pooling information from multiple sources, it's likely that the company's NBCUniversal segment can charge brands more for ads due to increased effectiveness. Blockchain is here to stay; cryptocurrenices are anybody's guess

Comcast Ventures also recently announced it would partner with IBM and venture fund Galvanize to back a new accelerator from enterprise-focused blockchain lab MState. Accelerators typically work with multiple start-ups, offering capital and expertise to young companies looking to scale their operations in return for minority ownership.

While I'm weary of "cybercompanies," companies that change their name or use cryptocurrency-friendly buzzwords to take advantage of gullible investors, Comcast Ventures appears to have the correct focus by using blockchain to support its current business. Like Alphabet, the company is wisely focusing on the underlying technology and not cryptocurrencies. Blockchain technology appears to be the real deal while risks (see the South Korea trading ban) abound for cryptocurrencies.

However, it should go without saying (but unfortunately that doesn't appear to be the case), that investors should evaluate Comcast on the strength of its underlying business and not on any blockchain-related announcement. And if you're looking to invest in cryptocurrencies -- rather than the underlying technology -- you'll need to do another set of due diligence to make sure you know what you're investing in.