For U.S. investors, Russia has never had the reputation of a "safe" place to invest. Headlines covering hacked bank accounts and DNC servers haven't made investors any more eager to invest in the Russian Federation.

Data source: S&P Global Market Intelligence.
* I'd take this one with a grain of salt. Veon is expected to lose money by the end of this year, and earn just one-third of what it earned in 2016, in 2018.
** No five-year projection is available, but earnings are expected to decline over the next two years. 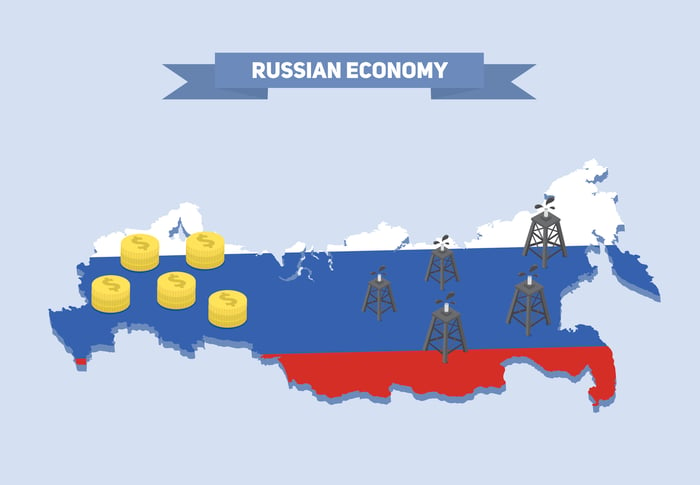 Russia is more than just gold and oil. It's got tech stocks, too -- and maybe one worth buying. Image source: Getty Images.

According to data from S&P Global, all of these five Russian companies do the majority of their business in Russia. That's notwithstanding the fact that Veon (known as Vimpel-Communications until February 2017) moved its headquarters to Amsterdam in 2010, and Qiwi set itself up in Cyprus way back in 2004.

Regardless of where they do business, all five of these stocks trade on the major NYSE or Nasdaq U.S. stock exchanges. While it's possible to buy stock in other well-known Russian businesses -- Gazprom, Lukoil, Norilsk Nickel to name a few -- in the U.S., to do that you need to place orders on the over-the-counter (OTC) market. In doing so, you'll assume the risk of investing in a less liquid marketplace where it's harder to determine a fair price, and trading volumes may be sparse. Furthermore, you may find yourself investing "blind" as OTC-listed stocks don't have the same requirements for financial disclosure with the SEC as NYSE- and Nasdaq-listed stocks do.

The advantage of picking and choosing your Russian stocks from the above list, therefore, is that you avoid these pitfalls.

The other advantage, of course, is that, as you can see in the chart above, these Russian stocks are cheap. With the exception of "tech" firms Yandex and Qiwi, which went public on the Nasdaq in 2011 and 2013, respectively, these Russian equities all sell for single-digit multiples to trailing earnings -- prices so low you usually don't see them except among the most troubled companies here in the U.S.

Are such low valuations justified? Are these companies "troubled"? Let's take a quick look.

Veon's name is not particularly Russian-sounding -- and that's by design. From its early days, "VimpelCom" (as it was then known) has styled itself as a Western company, selling mobile phone service in the Russian Federation under the "Beeline" brand. (This Western bent may have contributed to Veon's unpopularity with the ruling powers in Russia, and the eventual decision to relocate the company's headquarters abroad.)

Will Veon stock prove popular with investors? That's hard to say. After three years of losing money, Veon turned profitable again in 2016 -- but then began losing money right away in 2017. Still, Veon is cash-profitable, producing $437 million in positive free cash flow through the first nine months of 2017. Sales are growing nicely in most of its markets, in Russia and out. And Veon is positioning itself to evolve from a mere phone provider into "a global tech player" with investments in mobile payments and streaming video.

In contrast to Veon, Mobile TeleSystems is sticking to its knitting and doing the vast majority of its business at home in Russia, where it derives 83% of its revenue.

Earning $1 billion a year in profits, Mobile TeleSystems is a free-cash-flow monster, throwing off $1.26 billion in cash profits over the past year. With so much cash at its disposal, Mobile TeleSystems is the most generous of the easy-to-invest-in Russian stocks, paying a 9% dividend yield that dwarfs the payouts of U.S. analogs Verizon ( VZ -0.66% ) and AT&T ( T 0.28% ). And Mobile TeleSystems' payout ratio is 81%, meaning it still has room to grow its dividend a bit.

A true vertically integrated operation, Mechel mines iron ore and coal, burns the latter and refines the former into steel -- then sells off the excess heat and electrical power it creates through a power subsidiary. Combined, these three operations took in $4.5 billion in revenue last year, and earned a pre-tax operating profit margin of $697 million -- a 15.5% profit margin that would be the envy of U.S. Steel (which earned a 0.03% operating profit margin last year).

That's the good news. The bad news is that almost no one on Wall Street expects Mechel to be able to keep this up. According to S&P Global estimates, sales at Mechel are expected to decline more than 25% next year, which probably won't be good news for profit margins -- or profits.

With a 24% projected annual earnings growth rate over the next five years, Yandex is easily the Russian stock Wall Street analysts are most optimistic about. But should they be?

Over the past five years, Yandex's profits have actually declined at an annualized rate of about 3% per year (despite revenue growing strongly at an average rate of 27%). Yandex is also the priciest Russian stock on this list, with a valuation not far below 100 times earnings.

True, "the Russian Google" has some things going for it, like an asset-lite business model that permits the production of copious cash. Over the past year, free cash flow ($155 million) outpaced GAAP earnings ($113 million) by 37%. In four of the past five years, though, the opposite has been true, with Yandex unable to produce enough cash to back up its reported earnings.

With operations ranging from internet search to maps to e-commerce to ridesharing (a la Uber, now a Yandex partner), Yandex has its tentacles in most parts of the Russian internet economy and resembles Alphabet a lot in that regard. I just wish it did a better job of imitating Google's ability to consistently produce strong free cash flow.

Finally, we come to Qiwi, a specialist in online and mobile electronic payments -- and owner of a network of 113,000 e-payments kiosks, running proprietary software, that help utilities customers pay their bills. Qiwi is also the Russian stock I'm most optimistic about, because of its strong balance sheet, even stronger growth prospects, and 5%-plus dividend yield -- more than twice the average on the S&P 500.

Pegged for only 12% annual long-term growth on Wall Street, Qiwi might not look that enticing. But some analysts think the payments specialist could more than double its earnings to $2.26 per share by 2021, which would be closer to a 25% growth rate, as this high-margin business grows in size. Free cash flow at Qiwi is robust -- $80 million generated over the past 12 months, versus only $44 million in GAAP earnings. Valued on that free cash flow, Qiwi stock sells for less than 11 times earnings -- a good price for 12% growth -- a great price if it can achieve 25% growth. Plus, Qiwi has no debt and nearly $300 million in cash -- about $1 for every $3 in market cap -- making it even cheaper than it looks on the surface.

Rather than the cheapest stocks on this list (Mechel and Veon), the most popular and fastest grower (Yandex), or the biggest dividend payer (Mobile TeleSystems), Qiwi is my favorite "Russian" stock today.

Is This Russian Tech Stock a High-Yield Hidden Gem?

Should You Invest in Qiwi, the “PayPal of Russia”?