When Amazon.com, Inc. (NASDAQ:AMZN) opened as an online bookseller 20 years ago, there were few who could have predicted just how much the world of retail would change in the ensuing two decades. Recent reports indicate that the company accounted for 44% of all e-commerce sales in the U.S. in 2017, and 4% of total retail nationwide, according to e-commerce analytics provider One Click Retail.

Amazon had dabbled in the grocery market for years with offerings like Amazon Fresh, but the full extent of the company's ambitions in the space became clear with its $13.7 billion acquisition of Whole Foods, giving the company an instant and sizable footprint in groceries. This followed on the heels of news that Amazon was experimenting with a cashier-less grocery store, though the technology proved difficult to implement. 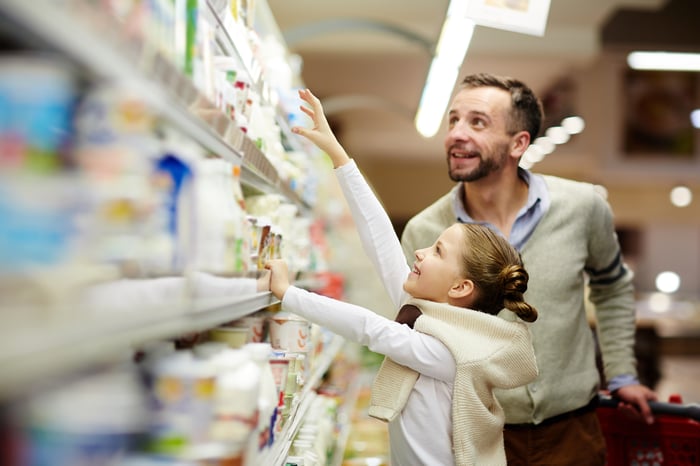 Beginning Monday, Jan. 22, shoppers can download the Amazon Go app on their phones to access the store, located at Amazon's headquarters building in Seattle. Once inside, customers go about their shopping as they normally would. A system tracks the movements of patrons as a 3D objects from the moment they enter the store, combining data captured by cameras that blanket the store with information from a variety of sensors. This enables the system to automatically sense items that are taken from (or returned to) shelves.

A combination of computer vision, weight sensors, and artificial intelligence -- or more specifically deep learning -- detect and track the products on a virtual register tape. Once customers leaves the store, their accounts are charged and they receive a digital receipt.

The company introduced Amazon Go to much fanfare in late 2016, initially testing the concept on company employees. It was rumored that plans to open the store to the public in the spring of 2017 were scrapped when the technology supposedly had difficulty handling more than 20 customers at a time, causing the system to crash. Amazon has since continued to improve the technology, which has proved successful when tested on a growing number of shoppers.

The store still requires in-store employees for a variety of functions, from restocking shelves to checking IDs for alcohol purchases. There are also a number of chefs on-site preparing a number of ready-to-eat items like sandwiches, salads, and wraps.

Amazon hasn't revealed plans to expand beyond the single location, but investors need only look to the history of its physical bookstores for an indication of how the company might proceed. From a single store opened in late 2015, Amazon Books has grown to 13 locations currently, with three more opening soon. The physical bookstore offers a carefully curated selection of thousands of in-store books among the millions of titles available on the website. It also acts as a showcase for the growing family of Echo, Kindle, Fire tablet, and Fire TV products, giving potential buyers a place to physically test the devices. 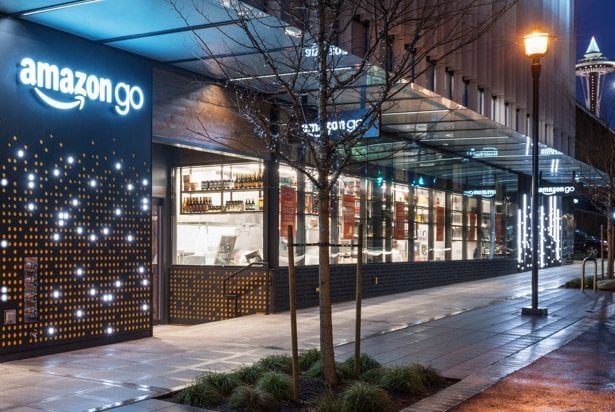 Will Amazon Go give the company another edge in the grocery business? Image source: Amazon.

While Amazon's ambitions in the sector are clear, its path is uncertain. The U.S. grocery sector generates an estimated $800 billion in annual sales, with Amazon garnering only $2 billion of that total in 2017, according to a report by One Click Retail. While the company currently accounts for only a small fraction of the market, it is important to note that Amazon captured 18% of all online grocery sales last year, more than double that of its nearest competitor.

That market is expected to surge in coming years according to "The Digitally Engaged Food Shopper," a joint report by the Food Marketing Institute and Nielsen. Online sales of groceries could jump five times in the coming decade, from $20.5 billion in 2016 to an estimated $100 billion by 2025. Internet grocery sales could grow from 4.3% of U.S. food and beverage to as much as 20% of the total during that period, according to the report.

Amazon is uniquely positioned to continue its incursion into grocery sales. Its well-established e-commerce business, its acquisition of Whole Foods, and its willingness to innovate in an otherwise stodgy industry will serve the company well. While it hasn't said so, I expect the company will eventually begin testing its automated shopping technology at Whole Foods once any remaining issues are resolved.