Wall Street thinks New Oriental failed last quarter, but should it be grading on the curve?

New Oriental exceeded expectations for Q2 revenue, booking $467.2 million when analysts had been looking for only $456 million. However, New Oriental earned only $0.09 per share pro forma and just $0.03 per share in GAAP terms in Q2. By either measure, these numbers fell short of the $0.11 per share Wall Street  had hoped it would earn. 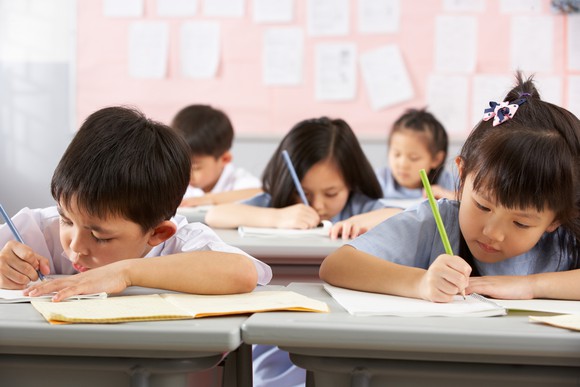 On the third hand, though, focusing too much on just one quarter's results may be a mistake -- especially in Q2, which New Oriental CFO Stephen Zhihui Yang reminded investors "is traditionally the slowest quarter in the year" for New Oriental. Meanwhile, for the first half of this year, New Oriental's sales were up nearly as much as for Q2 alone -- 29% year over year. More importantly, the profit New Oriental earned on those sales increased 7% to $1.03 per American depositary share.

Despite falling in Q2, earnings were both positive and growing for the first half as a whole. Not growing as fast as sales, granted, but at least heading in the right direction.

As for where New Oriental will be heading the rest of this year, Yang told investors that "margin pressure will gradually lessen over the coming quarters" and added: "More importantly, we will increasingly benefit from economies of scale." In Q3, management is forecasting sales to grow 35% to 38% -- in line with Q2 growth and faster than seen in H1 as a whole -- to between $591.1 million and $604.2 million.

Management didn't give guidance for Q3 earnings, but on Wall Street, analysts are looking for the company to produce $0.59 per share, presumably pro forma.