With this in mind, I researched stocks with solid growth prospects that also pay solid dividends. And by solid, I mean earnings growth potential of at least 10% annually over the next five years and dividend yields of at least 2%. Three top stocks that made the cut were AbbVie (NYSE:ABBV), Brookfield Infrastructure Partners (NYSE:BIP), and Iron Mountain (NYSE:IRM). Here's why these stocks are definitely worth considering for your retirement portfolio. 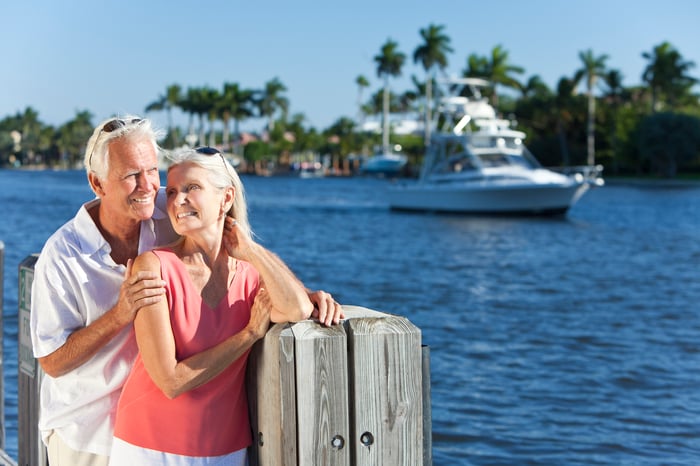 In addition to its good growth prospects, AbbVie also pays out a nice dividend. Its yield currently stands at 2.71%. The drugmaker has increased its dividend by a whopping 77% over the past five years. Probably the only way AbbVie's dividend yield won't go higher is if the future dividend increases don't keep up with the stock appreciation -- exactly what happened last year.

There are plenty of reasons AbbVie's success should continue well into the future. At the recent J.P. Morgan Healthcare Conference, AbbVie CEO Rick Gonzalez noted that the company's top-selling drug, Humira, should grow sales from around $18 billion in 2017 to close to $21 billion by 2020. Even better, he said the company expects $35 billion in risk-adjusted non-Humira annual sales by 2025.

Brookfield Infrastructure Partners also trounced the S&P 500 and Dow Jones indexes last year, with the stock gaining nearly 34%. Analysts think more growth is in store: The consensus estimate calls for Brookfield to grow earnings by an annual average of 34% over the next five years.

But Brookfield Infrastructure's attraction isn't just growth. The dividend currently yields north of 4%. Including reinvesting this strong dividend, the stock's total return in 2017 was nearly 40%.

The company, which owns and operates communications, energy, transportation, and utility infrastructure businesses, achieved much of its success last year by making strategic acquisitions. While acquisitions will no doubt continue to be an important driver of long-term growth, Brookfield will probably focus more in 2018 on building out its infrastructure. The company has its largest backlog of expansion projects ever, with a price tag in the neighborhood of $2.3 billion.

Brookfield has a solid track record of getting a good return on its investments. The coming infrastructure expansion, which includes deploying smart meters for its U.K. utilities and investing in toll roads purchased last year, should deliver a strong return on investment as well. Expect Brookfield to keep on growing -- and raising its dividend -- for years to come.

Iron Mountain didn't post a market-beating performance last year. However, the stock's gain of 16% in 2017 certainly was nothing to complain about. More important, though, including the impact of reinvesting, Iron Mountain's strong dividend pushed the total return for the stock up to nearly 24%.

That dividend, by the way, currently yields over 6.6%. And it's growing. Iron Mountain expects to increase the dividend by at least 4% annually over the next few years.

Can the stock price grow also? I think so. Iron Mountain, in my view, is the kind of stock you can buy and hold forever -- or pretty close to it. The company specializes in records storage and information management and enjoys a near monopoly. Around 95% of the Fortune 1,000 use Iron Mountain's services.

Wall Street analysts project that Iron Mountain will increase its average annual earnings by 32% over the next five years. That doesn't seem far-fetched to me. The company should be able to expand significantly in emerging markets. Iron Mountain has started to move into the data-center real estate market, another high-growth opportunity. And the reality is that organizations continue to generate increasingly more records and data that will need to be stored somewhere. That somewhere is likely to be Iron Mountain's facilities.

I'm convinced that all three of these stocks can build retirement wealth. They have tremendous growth prospects. They pay great dividends. But there's one thing to remember: Building retirement wealth takes time.

Even though AbbVie, Brookfield Infrastructure Partners, and Iron Mountain enjoyed great years in 2017, not every year will be that good. Any of these stocks could disappoint you in a given quarter or year. Over the long run, however, all three of these companies have solid business models that should generate value. After all, it's really not stocks that will create retirement wealth for you; it's the underlying businesses.