Please ensure Javascript is enabled for purposes of website accessibility
Log In Help Join The Motley Fool
Free Article Join Over 1 Million Premium Members And Get More In-Depth Stock Guidance and Research
By Matthew Frankel, CFP® - Jan 24, 2018 at 6:52AM

Given the high cost of owning property, it may seem impossible to invest in office buildings, retail properties, or apartments in New York City. However, through real estate investment trusts (REITs), some of which specialize in NYC real estate, everyday investors can own a piece of the Big Apple. 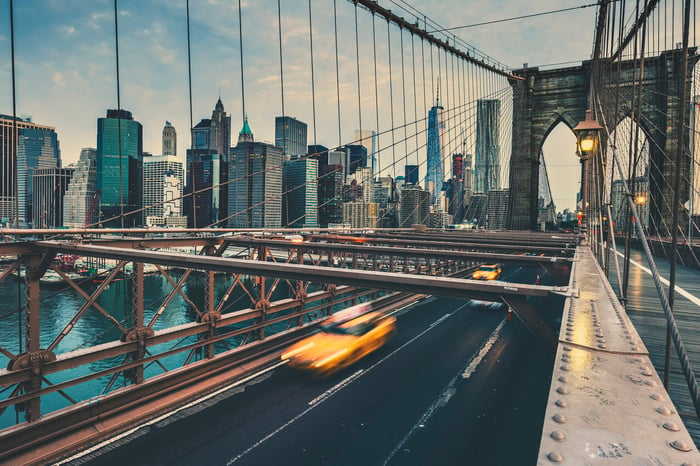 The most iconic New York office building, and much more

As the name suggests, Empire State Realty Trust is the real estate investment trust behind the Empire State Building. The company also owns several other properties, all of which are located in Manhattan or in the New York metropolitan area. 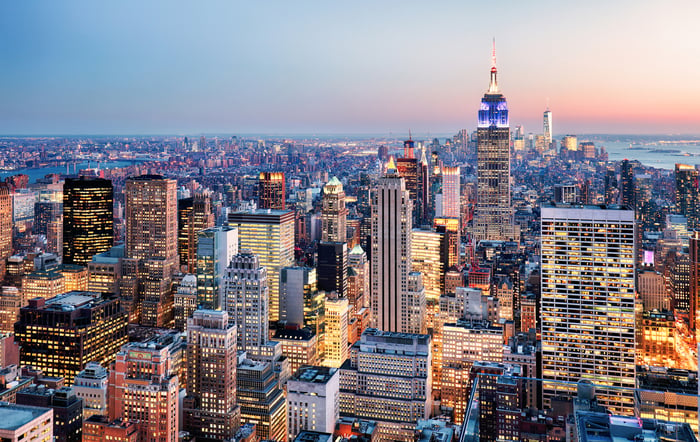 Most of the company's portfolio consists of office space, but there is a small retail component to the portfolio as well, including the famous Empire State Building observatory. In fact, in a recent year, the company generated more revenue from the observatory than it did from all of the building's office leases.

Although the vast majority of Empire State Realty Trust's portfolio (about 93%) is made up of office space, the company has a diverse tenant base, with top tenants that include Thomson Reuters, Linkedin, Macy's, and Johnson Controls, just to name a few. And 72% of the company's leases expire in 2020 or later.

The recent numbers have been quite impressive. During the third quarter of 2017, the company achieved 8.1% same-store NOI growth year-over-year and grew the portfolio occupancy rate by nearly a full percentage point to almost 90%.

In addition, there is still a tremendous opportunity to generate additional income. Between opportunities for redevelopment, lease-up of vacant space, and other untapped opportunities in the current portfolio, management feels that it can increase net operating income by as much as 26%. And that's without any further acquisitions.

The top holder of commercial property in New York City

While Empire State Realty Trust has the most famous building in New York City, no REIT owns more NYC commercial real estate than SL Green Realty Trust. The company owns 55.4 million square feet of real estate, the vast majority of which is in the city. And like Empire State, the majority of the portfolio consists of office space, with a smaller but important retail component.

SL Green's tenants are high-quality and diverse, with major tenants ranging from financial giants such as TD Bank to tech heavyweights Amazon.com and Apple, to media powerhouses like CBS and Viacom. Only one tenant, Credit Suisse, makes up more than 3% of the company's rental revenue.

The portfolio is currently 94.8% occupied, 440 basis points more than the overall midtown Manhattan office market. And, the company maintains industry-leading ratings for tenant satisfaction, which indicates that its high occupancy isn't in jeopardy anytime soon.

Over its 20 years as a publicly traded REIT, SL Green has grown its funds from operations (the REIT equivalent of "earnings") at a 6.9% annualized rate, significantly outpacing its peers. With $425 million worth of properties in various stages of development and a big share repurchase initiative set for 2018, this is a New York REIT to watch.

The urban rental market is strong

While it's not a pure-play New York City REIT, Equity Residential is a great way to get a piece of the hot NYC residential real estate market.

Eighteen percent of Equity's portfolio is in the New York metro area, and the rest is concentrated in the San Francisco, Southern California, Washington D.C., Boston, and Seattle markets. Across these core markets, the company owns 305 apartment properties, 70% of which are mid- to high-rise, with a total of more than 78,000 apartments. Like New York, the other markets have high barriers to entry, strong rental market fundamentals, and favorable demographic trends.

In Equity's markets, real estate prices are significantly higher than the national average; household formation is extremely strong, especially in the renter-heavy 25-34 age group; and household income growth has been 50% higher than the U.S. average since 2003.

To put it mildly, urban rental markets are hot right now. Equity's portfolio is about 96% occupied -- the highest rate of the three stocks discussed here -- and the company expects full-year 2017 renewal rent increases to come in at 4.6%.

Equity has one of the best balance sheets in the REIT industry, and one of the best credit ratings (A-/A3), which helps keep its cost of capital low. Speaking of costs, Equity is excellent at managing its expenses, as its overhead as a percentage of revenue is 90 basis points lower than its peer group average. This is a big reason the company's long-term returns have been so attractive -- revenue has grown at an annualized rate of about 3.4% over the past decade, while expenses have grown by less than 2% annually.

One other reason to like Equity Residential is its aggressive portfolio strategy, which involves not only developing and acquiring properties, but also disposing of significant amounts of assets. If Equity thinks that it could use its capital to generate higher returns elsewhere, management is glad to sell properties and move on. Since 2015, the company has made about $7.7 billion in sales, generating an internal rate of return of 12% for shareholders.

This Dividend Stock Is Finally Recovering From the Pandemic