The worst thing is, United is taking down all the other airline stocks with it: American Airlines (NASDAQ:AAL) is down 7.6% and Delta (NYSE:DAL) is down 6.9%. Even discount airline Southwest (NYSE:LUV) is feeling the pain, with its stock off 4.6%.

But the strangest thing is... none of these other airlines reported earnings last night or this morning. And for that matter, even United Continental didn't "miss" earnings -- it beat them. 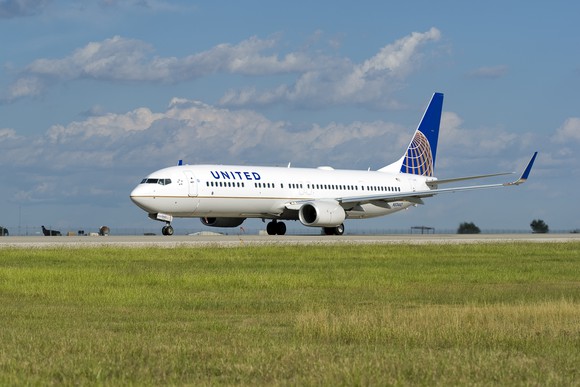 United Airlines reported $1.99 per share in profit on $9.44 billion in total revenue for its fiscal fourth quarter. The company's revenues rose 4% year over year, and edged out analyst expectations for $9.42 billion in sales. The company says its "adjusted earnings" were a bit lower than its GAAP number -- only $1.40 per share. Still, judged by that yardstick, United still beat analyst consensus expectations for $1.34 per share.

Best of all, on a GAAP basis, United Continental's $1.99 in Q4 profits grew 58% in comparison to last year's Q4. That's a pretty fantastic result -- so why are investors knocking nearly 12% off of United's stock price and taking all the other airline stocks down with it?

In a nutshell: In addition to reporting earnings, United announced a plan to increase its capacity (i.e. buy more airplanes) by 4% to 6% in 2018 -- and increase it again in both 2019 and 2020. Furthermore, United intends to compete more aggressively with discount carriers on price.

The first part of this plan promises to increase supply -- which Econ 101 teaches us that, paired with a given level of demand, will lower prices. The second part promises to lower prices even more -- forcing other carriers to cut their own prices to compete, thereby igniting a price war and hurting profits for everybody.

United President Scott Kirby explained the company's move by arguing that "the best way to compete with a low-cost carrier is match their prices." Still, the prospect of slimmer profit margins is frightening investors away from the whole industry today -- low-cost and high-cost carriers alike.

United executive vice president Andrew Levy promised to try to limit the damage of a price war by continuing "to focus on cost control" at United. But investors seem less inclined to trust, and more determined to verify, before buying any more United Continental stock.

As for United's rivals, which have been severely hurt by United's move last night -- Delta already reported strong results earlier in the month, but American and Southwest report their Q4 results tomorrow. We'll have to see how they respond to United's announcement.