One could forgive Royal Caribbean Cruises Ltd.'s (NYSE:RCL)management for sounding like sportscasters covering an NBA game Wednesday when they reported that the cruise line had clinched a "double-double" in the fourth quarter.

But in this case, the double-double referred not to points and rebounds, but to the company's three-year goal to double earnings per share (EPS) and push return on invested capital (ROIC) to over 10%. With a full-year 2017 adjusted EPS of $7.53, and an ROIC of 10.5%, it achieved these targets.

Several factors undergirded Royal Caribbean's success in 2017, which in turn built upon prior years. Most notably last year, the cruise line was able to improve net revenue yield -- that is, net revenue divided by total available passenger cruise days. For the year, "net yields" rose 6.5%. Royal Caribbean's ability to amplify its revenue per passenger was a key component in the company's 3.3% annual revenue increase to $8.8 billion in 2017.

The company also exhibited discipline in managing its operations. Total cruise operating expenses of $4.89 billion represented 55.7% of total revenue, a marked improvement over the 59% of revenue they absorbed in 2016.

Upon reaching its goals, the company announced that it will issue surprise bonus checks to employees. Corporate officers excluded, each of Royal Caribbean's 66,000 employees will receive a bonus equal to 5% of their annual salary. This is one of the handful of surprise bonuses you'll hear about this earnings season that isn't being tied to the recently enacted U.S. corporate tax cuts. 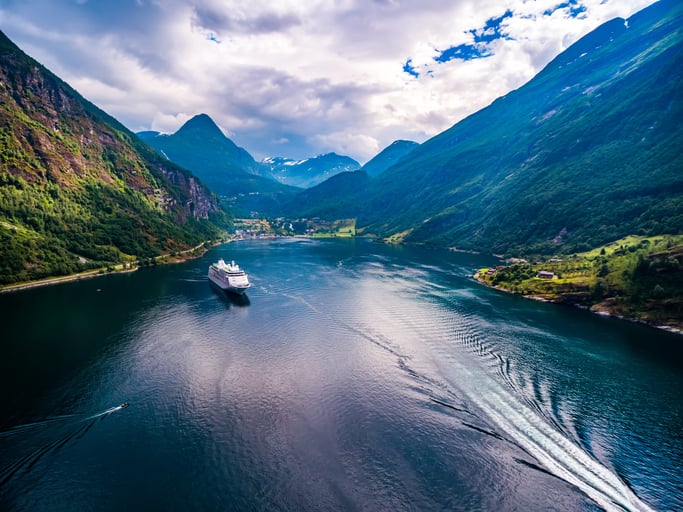 Keeping up with a wave of industry demand

As I explained in an article last year, the cruise line industry is enjoying a brisk compound annual growth rate of 4.5%, due in part to baby boomers' penchant for travel. But its growth is also supported by younger demographics, particularly millennials, who prefer to splurge on experiences rather than material possessions.

In 2018 and beyond, Royal Caribbean is attempting to capitalize on that type of demand by launching several experientially focused itineraries. For example, the company's Celebrity Cruises line will in 2019 begin operating a Galapagos Islands route with a new small ship, the Celebrity Flora, specifically designed for that destination.

The organization is also improving options in the Caribbean, where roughly half of its ship capacity plies annually. CEO Fain highlighted upgraded Cuba itineraries as an example of Caribbean route enhancement during the company's conference call.

Overall, the company will increase passenger capacity by roughly 4% in 2018 in order to meet demand while maintaining its current desirable yield levels.

In the current year, Royal Caribbean expects net yields to rise at a more modest pace, within a range of 2.75% to 4.75%. The company will launch three new ships in 2018: Celebrity Edge to be based Fort Lauderdale, Florida, and Azamara Pursuit and Symphony of the Seas in Europe. Management's earnings guidance calls for full-year adjusted EPS of $8.55 to $8.75 per share, which would represent a 15% improvement in earnings at the midpoint of the range.

The company continues to cruise ahead, and it remains an attractive vehicle for total return. Last summer, I recommended Royal Caribbean and Carnival Cruise lines as worthy dividend investments. In the fall, the cruise line raised its dividend by 25%, putting its dividend yield close to 2% at current share price. A healthy company in a healthy industry, Royal Caribbean is worth consideration for a place within growth-oriented, long-term portfolios.