Diageo plc (NYSE:DEO) continued its dominance of the global spirits business in the first half of its fiscal 2018. Whiskey and vodka made up the largest percentage of revenue once again, but it was the emergence of gin and tequila as growth spirits that really pushed results higher.

Here's a look at the overall numbers and what was key to Diageo's performance to start fiscal 2018. 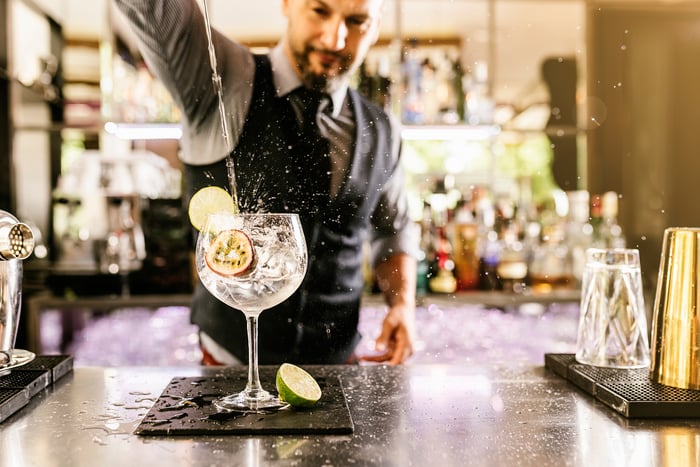 Data source: Diageo. H1 = first half of the (fiscal) year.

What happened with Diageo?

Diageo continues to execute on its strategy of growing organically, expanding margins, and increasing cash flow that it can return to shareholders. The high-level numbers above show some of the operational improvements, but here are the key points investors should be looking at from the first half of fiscal 2018.

Diageo has done a great job executing on its operational strategies while adapting to the market at large. Scotch, U.S. spirits, and India continue to be three areas of focus, and as gin and tequila grow, we're seeing a shift to those products as well.

Speaking to how well tequila is doing, CEO Ivan M. Menezes said during the conference call that " ... tequila is really hot, and the big gainers in ultra-premium tequila right now in the U.S. [are] Don Julio and Casamigos. You can see our overall tequila business has grown 43%, excluding Casamigos, because it's not in organic. But if you look at underlying Casamigos performance, I'm really delighted with the momentum we are seeing."

Management put its operations performance and long-term guidance targets like this: "Our financial performance expectations for this year remain unchanged. We are confident in our ability to deliver consistent mid-single digit top line growth and 175bps of organic operating margin improvement in the three years ending 30 June 2019."

As the spirits business has consolidated, it's allowed Diageo to slowly raise prices and increase margins around the world. Armed with some of the best brands, Diageo is set to succeed for years to come.