After a couple of down years, Kinder Morgan's (NYSE:KMI) cash flow is on pace to start growing again in 2018, with it expected to increase 3% per share. Driving that turn is the $3.2 billion of expansion projects the company completed in the past year. Meanwhile, there's more growth coming down the pipeline, with the company currently working on $11.8 billion of expansion projects that should increase cash flow over the next few years.

That said, in addition to this visible growth, there's another driver that most investors seem to be overlooking: acquisitions. While the company hasn't made a meaningful deal in the past several years, that could change in 2018. 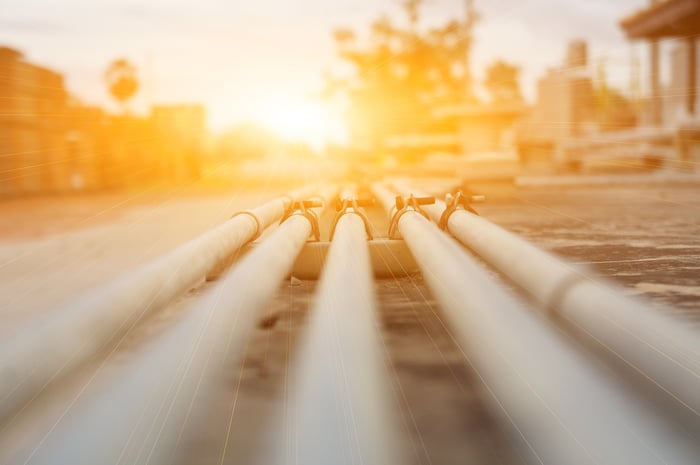 Restarting the other growth engine

Over its 20-year history, Kinder Morgan has invested more than $60 billion to expand its network of energy infrastructure assets. More than half that spending was on acquisitions. However, the company hasn't made any deals since early 2016 when it closed a $350 million transaction to acquire 15 refined product terminals as part of a joint venture with BP (NYSE:BP). Instead, it has sold some assets to repay debt while focusing on investing in organic growth projects that it could finance with internally generated cash flow.

That's because its access to outside capital dried up during the oil market downturn. However, with market conditions improving, the company seems to be on the hunt for deals, with it noting at its recent Analyst Day that acquisitions were one of the long-term growth drivers for its natural gas pipeline segment, and that it expected some market consolidation in the near term. These future deals could be small asset purchases like the last one with BP or entire companies, with private equity-backed midstream businesses one potential target. 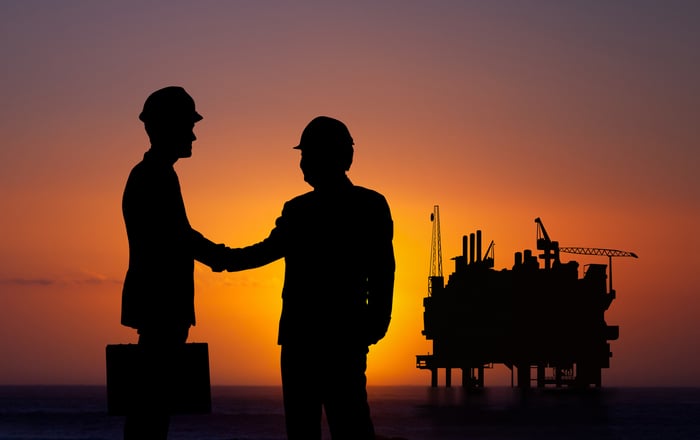 Before the oil market meltdown, Kinder Morgan used its equity as currency to make acquisitions. For example, in 2013 the company's former MLP bought Copano Energy for $5 billion in a 100% equity deal. That said, Kinder Morgan's stock price has fallen 55% in the past three years even though cash flow has only declined 7%, so issuing more stock to finance acquisitions isn't an option because shares are too cheap. In fact, the company believes its stock is so cheap that it has authorized a $2 billion repurchase program. It already spent $250 million last year and could buy back more than $500 million this year. That said, the company did note that instead of spending its estimated $568 million in excess cash on buybacks that it could invest the money into high-return projects, which could include acquiring an interest in a project developed by another company.

In addition to having more than $500 million in free cash flow at its disposal, Kinder Morgan also might get a cash infusion this year from asset sales. Apache (NASDAQ:APA) has the option of buying a 15% stake in a recently announced pipeline project. If Apache exercises its option on that $1.7 billion project, it would need to pay Kinder Morgan about $250 million, less any remaining capital spending, which Kinder Morgan could reinvest into an acquisition. Aside from that sale, the company could monetize some non-core assets or even its carbon dioxide business. While the carbon dioxide business generates good returns and free cash flow, Kinder Morgan noted at its Analyst Day that "as a shareholder-driven firm, we continuously evaluate all options to enhance shareholder value." If the company could create more value for investors by selling assets like that to pay for a needle-moving natural gas pipeline-focused deal, it would likely jump at the opportunity.

Finally, Kinder Morgan has credit facilities with more than $4.5 billion of liquidity available that it could use to finance deals. While using this credit would push its leverage ratio up temporarily, the company is close enough to its target level that it could comfortably borrow money as long as it had a clear path to get that metric down in the near term.

The right deal to jump-start this stock

The market sees Kinder Morgan as a no-growth stock since earnings are only on pace to increase 3% this year and its largest future growth project continues to face delays. However, by focusing internally, investors are overlooking the potential for the company to restart its acquisition growth engine this year. Not only does the company have the cash flow to make a small deal, but it has the liquidity and other sources to complete an even larger transaction without using any of its cheap stock. If it can find a deal that moves the needle and accelerates its growth rate, Kinder Morgan could add a bit more fuel to help get its stock out of its slump.