Apple (NASDAQ:AAPL) might be the biggest, most popular company in the world. But investors don't give the iGiant anywhere near the same level of respect as its largest tech peers.

Apple is trading at an average 40% discount to Facebook (NASDAQ:FB), Alphabet (NASDAQ:GOOG) (NASDAQ:GOOGL), and Microsoft (NASDAQ:MSFT)! And it's pretty much always been this way. 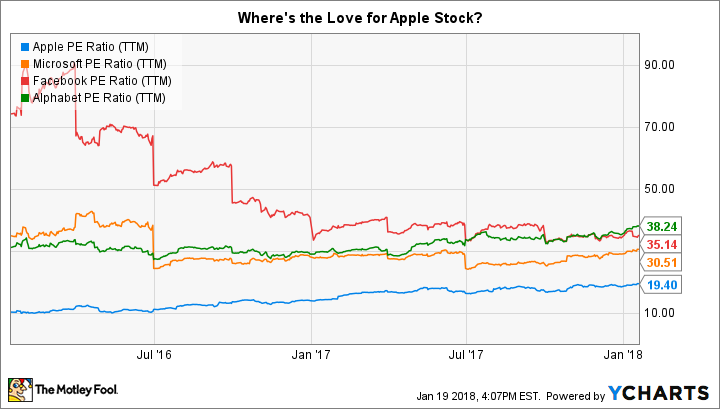 But why is this the case?

Some investors have resigned themselves to this reality. Others have very plausible excuses:

But while these make sense on the surface level, I simply don't think they explain the heart of the matter. There's only one plausible explanation: Apple's moat is nowhere near as wide as those of the other three, and the market knows it.

It's not about size or growth rates

It's true, Apple is the largest, most valuable company the world has ever known. With a bump of just 10%, it would become the history's first trillion-dollar organization. But while the law of large numbers does make sense on paper, Apple's not so big compared to its peers that it should necessitate such a discount.

If you look at the top ten largest stocks listed on the New York Stock Exchange and Nasdaq, all three of these peers sit in the top six. 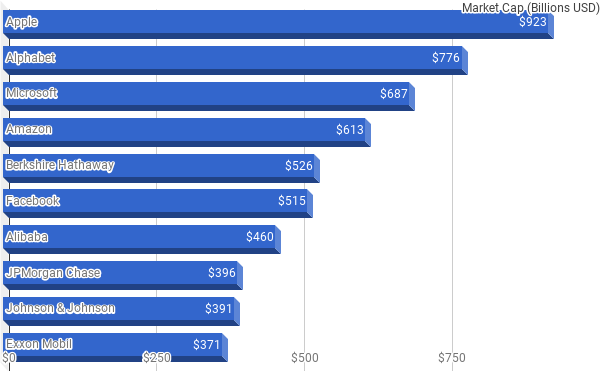 It's also worth stating that just because a company is approaching a landmark like $1 trillion, it doesn't mean it can't stop growing from there. Indeed, because the stock market has always gone up over the long-run, all-time barriers are routinely broken. There's no reason Apple couldn't keep growing.

Others will argue that Apple is simply not growing as fast as its tech peers. While that's true with Facebook, it isn't with Microsoft or Alphabet.

While Facebook is growing demonstrably faster, Apple's earnings growth has outpaced Alphabet (surprise!), and it has Microsoft beat on both top and bottom lines.

And yet Apple still trades at a 40%+ discount.

Before getting into the weeds, it's important we define our terms. A "moat" is another word for an enduring competitive advantage. In the simplest sense, a moat is what keeps customers (or users) coming back to a single company year after year, and holding the competition at bay for decades. 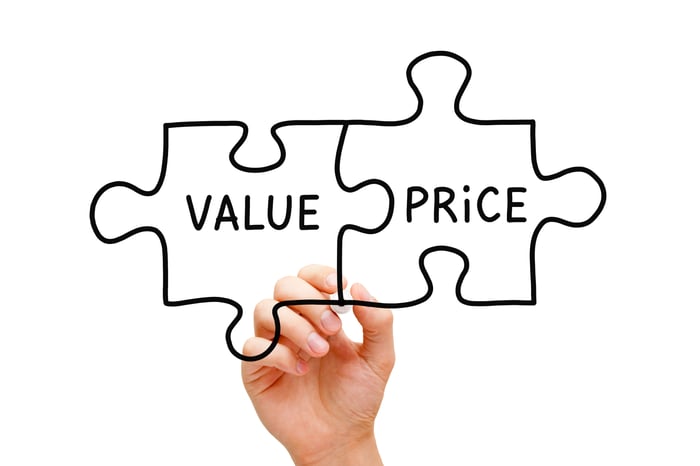 There are four key types of economic moats, and while each company has elements of multiple moats in its business model, a single moat dominates. For the purposes of this article, that's convenient.

No moat will ever mean that a business is safe forever.  As Arjun Sethi -- co-founder and CEO of MessageMe -- recently wrote: "A moat simply buys a company time to figure out the next great business." [emphasis in original].

Alphabet, Microsoft, and Facebook have business models with uber-wide moats around them. It would take a herculean effort to create a social network with as much stickiness as Facebook, Instagram, or WhatsApp (and not get bought out by Facebook). Someone would need to wrest "Google it" from our lexicon to break the stranglehold that Alphabet has on our search data. And competitors have been trying for decades to create a better Excel spreadsheet.

Those advantages give the leaders of these businesses an enormous head-start on figuring out the Next Big Thing.

There's no questioning Apple's status in the industry. But it has to count on its users continually upgrading to the next iPhone to remain relevant. That's not exactly an enduring advantage when viewed against the protection that Alphabet, Facebook, and Microsoft enjoy.

Don't get me wrong -- I'm an Apple shareholder myself. The company has done a great job of introducing high switching-costs via the iCloud, and it benefits from the network effect of third-party app developers building on its iOS. Its efforts in providing services have also been hugely successful.

But for now, it is predominantly an iPhone maker. And it is priced accordingly. I think the price is fair -- which is why I'm holding my shares. But I have no illusions of it ever consistently trading above a P/E of 20. You shouldn't either.