Bank of America (NYSE:BAC) had a strong year in 2017. Earnings beat expectations, loans and deposits grew nicely, and Warren Buffett-led Berkshire Hathaway became the bank's biggest investor. However, 2018 could be even stronger. Here's what I expect from Bank of America in 2018 and what it means to you as an investor.

Expect a continued emphasis on mobile and fintech

Bank of America has become a much more efficient bank since the financial crisis, and a big reason for this is its investment in mobile and online technologies. Simply put, it costs a bank much less for a customer to complete a transaction through a mobile app or an online banking portal than it does in a branch. 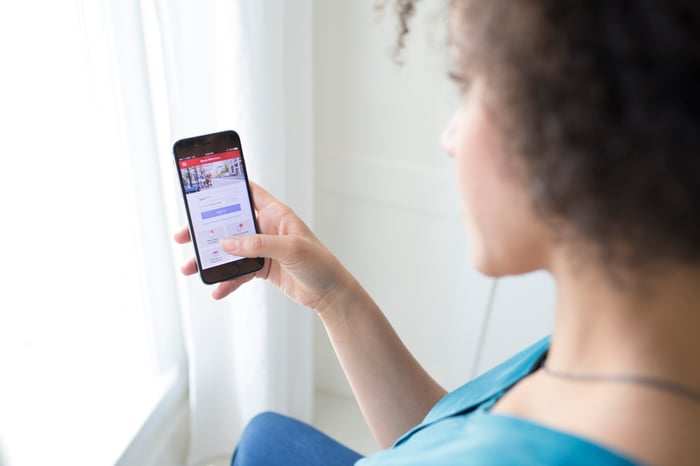 Over the past few years, the bank has been reducing its physical footprint, closing about 8% of its branches. Meanwhile, the reliance on mobile and digital banking has increased dramatically -- 23% of the bank's deposits now occur through its mobile app, up from just 12% at the end of 2014. There are now 4.7 million more digital banking users and 7.7 million more mobile banking users than there were three years ago.

The bank's online and mobile platforms are also some of the best in the industry. Javelin and Forrester named Bank of America No. 1 in mobile banking and digital sales functionality, respectively, and Kiplinger's named the bank's Merrill Edge platform the No. 1 online broker for 2017.

In 2018, I expect a continued emphasis on technology and increased adoption of the bank's mobile services, which should help to improve efficiency even further.

Bank of America, like most other U.S big banks, took a big one-time charge in the fourth quarter, after tax reform effectively devalued the deferred tax asset on its balance sheet.

However, over the long run, the new lower corporate tax rate should provide a major boost to profitability. In fact, CFO Paul Donofrio said that the bank's effective tax rate should drop to 20% for 2018.

Over the past few years, Bank of America has operated at an effective tax rate of roughly 29%, so this could translate to serious savings. Just to give you an idea, consider that for 2017, its pre-tax profit was $29.2 billion -- 9% of this amount is $2.6 billion. So even if Bank of America doesn't grow its pre-tax income at all (unlikely), it will see its net income increase by billions of dollars in 2018.

Speaking of growing its income, one catalyst that could make it happen in 2018 is margin expansion.

While it's not a completely predictable relationship, a general rule of thumb is that when the Federal Reserve raises interest rates, the rates that banks charge on loans tend to grow faster than the rates they pay out on deposits. The result is that the spread between the two, or the bank's interest margin, tends to increase.

The Fed increased rates three times in 2017, by a quarter-percentage point each time. And over the past year, Bank of America's net interest yield has gone from 2.23% to 2.39%, a 13-basis-point increase. Sure, a difference of 0.13% doesn't sound like much, but when we're talking about a loan portfolio of more than $900 billion, this makes a big difference.

With the Fed projected to raise rates at least three times in 2018, we could see a similar trend unfold.

Expect ROE and ROA to finally jump above 10% and 1%, respectively

This is perhaps the boldest prediction I'm going to make here. Banks generally need to generate at least a 10% return on equity to cover their cost of capital, so this figure, along with a 1% return on assets, are widely considered to be industry benchmarks. Bank of America also hasn't achieved them since before the financial crisis.

However, it's been getting close. The fourth quarter of 2017 is a bad indicator due to the one-time issues, but during the third quarter, its 7.9% ROE and 0.95% ROA weren't too far off. Plus, there has been tremendous improvement:

With the bank's improving efficiency and asset quality, lower legal expenses, and the positive catalysts of tax reform and interest rate expansion, I think that 2018 could be the year that Bank of America finally breaks through the ROE and ROA barriers.

Expect book value to climb in 2018

Bank of America's book value dropped in 2017. It wasn't for a bad reason -- it fell during the third quarter because Warren Buffett exercised warrants to buy 700 million shares of the bank for Berkshire Hathaway's portfolio, which had a dilutive effect (as expected) on the stock, and it also dropped slightly during the fourth quarter due to one-time charges.

In 2018, I see no reason why Bank of America's book value per share won't climb significantly from its current level, especially if profitability improves and loan and deposit growth continue.

The bottom line is that I expect Bank of America to have a strong year in 2018. Although the stock has been one of the best performers in the sector, if the predictions outlined here prove to be accurate, the stock could certainly have more room to the upside.