When Textainer Group Holdings Limited (NYSE:TGH) investors look back on 2017, they are likely to focus on the massive share price gain. It's hard to blame them, since the stock soared by 188% in the year. But that's really just a symptom of the most memorable thing that happened last year. Here's why 2017 was truly a year to remember for the giant shipping container owner.

For several years leading up to 2017, there was a glut of shipping containers. This pushed down the rates that leasing companies like Textainer could charge. That, in turn, led to increasingly weak financial results. 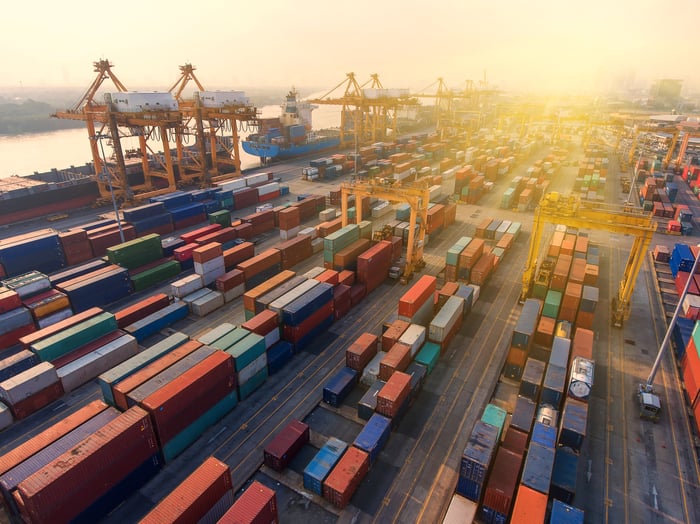 Textainer's earnings, for example, peaked at nearly $4.00 a share in 2012 before beginning to fall. One big problem was that more advantageous contracts signed when rates were higher were ending, and new ones had to be signed at lower rates. As you might expect, earnings were heading generally lower. They finally dropped into the red during the first quarter of 2016. In all, there were six quarters of notably depressed results.

However, that came to an end in the third quarter of 2017, when earnings jumped to $0.33 a share. The good news, though, was already in the cards because the supply overhang in the shipping container industry was drying up. That led to higher utilization rates for Textainer and the ability to start charging customers more for leasing each container. That's something that will become increasingly apparent as time goes on and contracts signed during the downturn get replaced at the current higher market rates. 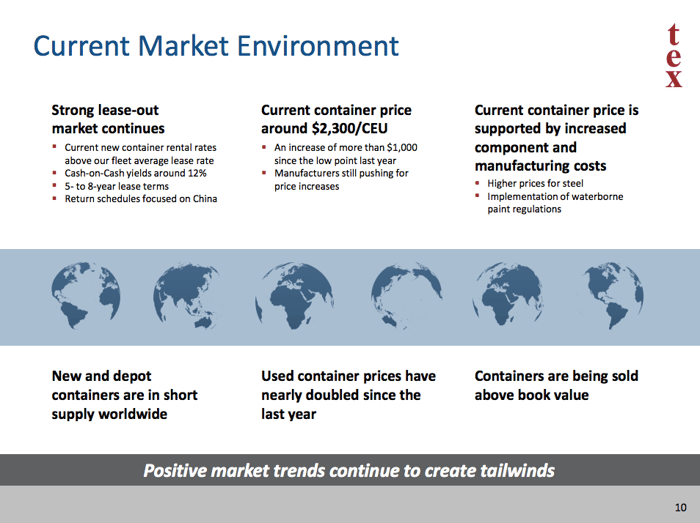 So the biggest, and most memorable, change was really the improvement in Textainer's core business on both the fundamental and financial levels. Moreover, as new contracts replace older ones, the future will look increasingly bright. But even here, there's more to understand.

The leasing model is one built on leverage. Essentially, Textainer takes on the upfront cost of buying shipping containers using debt. That alleviates the need for its customers to burden their balance sheets. Textainer then rents the shipping containers out at a rate that it hopes will cover its financing costs and provide an economic return on its investment. It recoups some of its original cost by selling used containers once they reach the end of their useful lives.

However, the prices it can charge are driven by supply and demand. As with any market, too much supply and/or too little demand can crush prices. Surviving those downturns is important if you want make it through to the next upturn. That can become a big issue when you add debt into the equation.

So, while the really exciting news of 2017 was the container market upturn that led to improved results at Textainer, the more important story is the company's ability to survive the downturn. It wasn't easy on Textainer or its shareholders. For example, the company cut its dividend in late 2015, trimmed it again in 2016, and then completely eliminated it before that year was over. 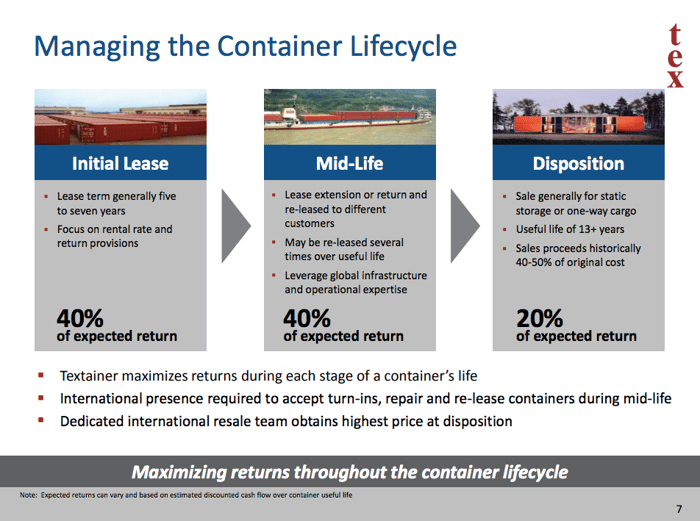 The company's long-term debt levels, meanwhile, rose through 2015 before management began to pull back in 2016. To put a number on that, long-term debt was 10% lower, year over year, in the third quarter of 2017. With earnings falling into the red, holding the line on debt was clearly an important decision.

However, the company's ability to maintain financial discipline (and access to capital markets) is vital to its long-term success based on its business model. That includes freeing up capital with dividend cuts. It's also worth noting here that Textainer was able to refinance a key credit line in 2017 at lower interest rates, showing that it has a solid working relationship with its lenders. Textainer's ability to manage through the downturn is the deeper takeaway from 2017.

Sum of the parts is greater than 188%

If you look back at 2017 and see only Textainer's 188% stock price advance, then you are missing a lot of information. The simple story is that a notable improvement in the outlook for leasing shipping containers improved the company's results and investor expectations. The stock responded accordingly. In fact, Textainer looks like it's on solid footing for a decent year in 2018, too, though it won't likely be as exciting on the stock price front.

But the deeper story is that the company made some tough calls and maintained financial discipline through a difficult period so it could survive an industry downturn and benefit when the market turned higher. So while 2017 was a year to remember, make sure you remember it for more than just the stock price change.